Ted Bardusch remembers the good old days of the 1980s when men and women were more equally represented in the tech field. He sounds wistful when he recalls running engineering teams that were half female and half male.

Bardusch is eager to dispel stereotypes about the kinds of people and training needed to succeed in tech. “You don’t need formal certification to be good at this,” he said. “You need to have the right brain and the right attitudes.”

Bardusch took his own indirect route to the sector, pursuing pre-med courses in college, majoring in chemistry and working as a radio station engineer (though his baritone voice is made to be on air). Then he discovered the joys of writing software and got a gig at a startup. In 1991, someone tried to hack the business. Bardusch’s response: “Oh wait a minute, you do not do that.”

He was hooked on security, going on to write his own firewalls and dominating capture-the-flag style hackathon contests. When Usermind needed a chief information security officer, Bardusch was eager to take on the role.

“I like to think that my innate passion for information security provides Usermind teammates and customers with the comfort of knowing our systems are safe for holding their data,” said Bardusch, who has worked at the company for three years.

We caught up with Bardusch for Working Geek, a regular GeekWire feature. Continue reading for his answers to our questionnaire.

Computer types: “Oh so many. iMac Pro is my favorite for a desktop. OpenBSD (one of the older Unix-like computer operating system), of course, for servers — what else would you expect from a CISO? For laptops, a MacBook Pro that’s often running Kali Linux, a digital forensics and penetration testing operating system.”

Type of mobile device(s): “iPhone 7+ and Nexus 6 (with LineageOS so it’s still getting security updates). The phones are on different networks of course! Having different hardware, operating systems and networks means I’m online nearly anywhere.”

Favorite apps, cloud services and software tools: “App: Dark Sky so I know when to take our two Great Pyrenees out to avoid the rain. Wet dog smell is a motivator. Cloud services: Amazon Web Services (AWS), everything a developer could want and more.”

Describe your workspace. Why does it work for you? “My home workspace is the iMac Pro, with one screen for virtual machines, the main screen for the terminal and other general things, and another for servers on the side.”

Your best advice for managing everyday work and life? “Make sure your work is something you’d do anyway. Life is too short to do something you don’t enjoy.”

Your preferred social network? How do you use it for business/work? “Facebook to keep up with friends, colleagues, classmates. Mostly I pontificate about security topics there — people appreciate the heads-up about the most recent things.”

Current number of unanswered emails in your inbox?  “2.”

Number of appointments/meetings on your calendar this week? “26. So much less than when at bigger companies!”

How do you run meetings? “It depends on the meeting, but typically I think the most productive meetings are goal-driven, so that’s why I like to begin every meeting by overtly stating what we’re trying to accomplish. It sounds simple, but it’s a great way to ensure everyone is on the same page from the start.

Rarely do I experience great productivity when you get a large group of people in a room for hours on end.

I also think it’s important to have short, efficient meetings with as few people as possible. Rarely do I experience great productivity when you get a large group of people in a room for hours on end.”

Everyday work uniform? “Jeans and white polo with something geek-like on it — like Euler’s Identity (this is a math equation considered by many to be particularly beautiful, and named after the Swiss mathematician Leonhard Euler).

How do you make time for family? “Just do it.”

Best stress reliever? How do you unplug? “Time with family and our dogs — two Great Pyrenees.” 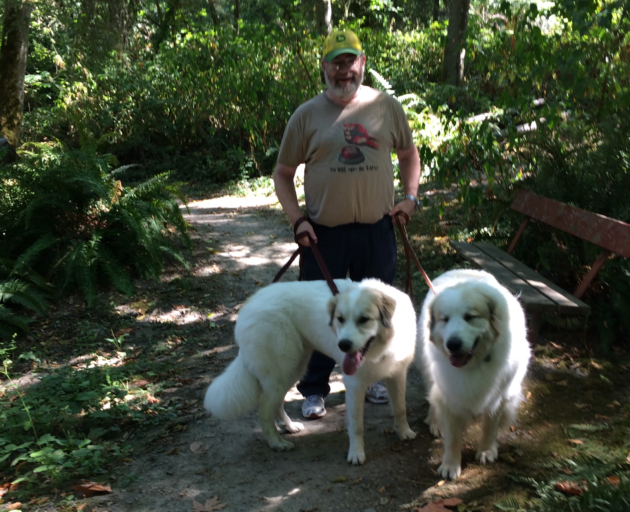 Book on your nightstand (or e-reader)? “Currently re-reading a classic: ‘The Cuckoo’s Egg’ by Clifford Stoll.”

Night owl or early riser? “Without any external constraints, I tend to drift into night owl, but commuting forces me to be an early riser.”

Where do you get your best ideas? “Ada Developers Academy, which is an intensive software development training program for women and gender diverse people in Seattle. In my experience, I think the most high-functioning teams are diverse teams including a more equal gender balance than we typically see today. So I put a lot of time and effort into help Ada. It’s the single most effective way I’ve found to personally make a difference and improve software engineering overall.

Conferences are also a great source of inspiration, so many deep thinkers to be found. In fact, I’m looking forward to speaking at the Seattle Technology Leadership Summit this June.

Finally, experimenting with a complex home network setup gives me lots of ideas as well.”

Whose work style would you want to learn more about or emulate? “Elon Musk. So creative and diverse yet capable of intense focus.”