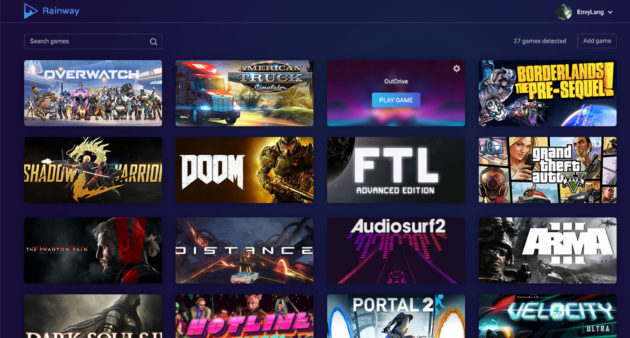 If you just can’t stop playing your favorite PC game but need to be mobile, Rainway thinks it has an answer.

The Atlanta-based startup has developed technology that lets gamers stream their PC games onto any device, allowing for continued gameplay beyond the confines of a desktop machine.

The company started as an open-source software platform called Ulterius that let users manage any computer from a web browser. When co-founders Andrew Sampson and Evan Banyash realized people were using the technology mainly for video games, they pivoted.

The result is Rainway, an 8-person startup that is currently participating in the Techstars Seattle program. It launched a beta in January for its free web browser version; support for iOS, Android, Xbox One, and other devices is coming soon.

“Passion can drive a lot of progress and at Rainway we have a lot of it,” Sampson wrote in a blog post last month. “For as long as I can remember I’ve had this burning passion for video games. I’ve spent weeks saving the planet, storming castles and braving the elements of uncharted worlds. So I see video games as more than a hobby, they’re an escape to worlds with many stories that have left a lasting impact on my life. Setting out to build Rainway our vision was to amplify that experience, giving you the ability to carry and engage with those stories no matter where you are.”

Rainway is part of a new trend of technology that goes beyond just gaming and allows people to run a “computer” from any device. Here’s an excerpt from a Wall Street Journal article last month headlined “This Powerful PC Runs on Any Device — and Never Needs an Upgrade”:

“Someday soon, what Uber did for cars and Netflix for TV will happen with computers. Rather than buy a suite of gadgets — a PC, phone, Xbox, etc. — you could just access their features when you need them. They won’t need to be distinct, powerful devices with their own hefty allocations of processor and memory. Instead, you’ll have a single virtual computer with all your data and preferences. You’ll reach for a touch screen when you’re on the go, sit down to a larger one with keyboard and mouse when you’re at your desk. Maybe you’ll have a wall-size one, too.”

Rainway is free for users; the company plans to introduce a premium tier later this year.

We caught up with Sampson for this Startup Spotlight, a regular GeekWire feature. Continue reading for his answers to our questionnaire.

Explain what you do so our parents can understand it: “Rainway lets people play their favorite PC games anywhere, and on any device.”

Inspiration hit us when: “While Evan and I were in a line for a panel at PAX East, we started talking to someone playing video games on their phone. That person expressed a lot of disappointment with how the mobile version was watered down in comparison to the PC version. By the end of the trip, we had new clarity on how to pivot.”

VC, Angel or Bootstrap: “Rainway has been bootstrapped so far, to focus on building the core tech.”

Our ‘secret sauce’ is: “What really sets Rainway apart is our games-first approach to development. We believe that users should be able to just login and play their games — even without needing to even know what an IP address or port is. Combine that ease of use with Rainway’s ability to bring high-quality streaming even when a device has poor Internet quality, and users are in for a fun time.”

The smartest move we’ve made so far: “Our team has invested a lot of time into leveraging our unique skill set to build web applications that push browsers to the edge of their limits. This move allowed us to target multiple platforms with a single code base, which saved months of development time and works on locked down systems, such as computers at school and work.”

The biggest mistake we’ve made so far: “During the prototyping phase, we let perfectionism and pre-optimization slow down development. Thankfully we’ve switched to a ‘keep it simple’ mindset.”

Would you rather have Gates, Zuckerberg or Bezos in your corner: “I’ve always looked up to Bill Gates for his genuine compassion for others, which makes me want to give more back to the world.”

The biggest thing we look for when hiring is: “Drive. We hire developers who have a real passion for coding and are always looking to create and build new things.”

What’s the one piece of advice you’d give to other entrepreneurs just starting out: “Don’t just surround yourself with cheerleaders. Building a strong business means hearing feedback that doesn’t make you happy. Take your ego out of the product and focus on the bigger picture.”