Google unveiled a new series of devices at an event New York City Tuesday, including the widely reported next generation of the Pixel smartphone, as well as a smart home hub and a new tablet.

Though it too was widely rumored, the Google Home Hub is the standout of the event so far. It gives Google a stronger presence in the smart home and an answer to the Amazon Echo Show with deep YouTube integration. Preorders begin today with a release date of Oct. 22, and the device is priced at $149. 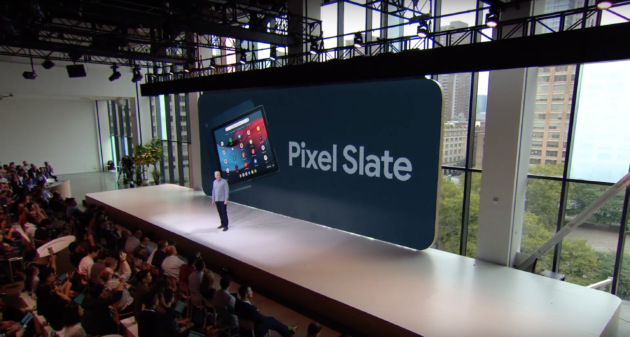 Google has been reconfiguring its tablet offerings over the last few years, eschewing the Android tablets of the past in favor of new devices under Chrome OS. Google revealed its first new first-party tablet in years under this plan.

The Pixel Slate, which looks a lot like a Microsoft Surface or iPad Pro and boasts 8 MP front- and rear-facing cameras, will be available later this year. It starts at $599, with a complementary keyboard for $199 and a pen for $99.

Poking fun at itself a bit, Google opened the event with a montage talking about how many details of the Pixel 3 phone and other devices leaked. Because of that, the focus of the Pixel 3 reveal was on the new features primarily, specifically those related to the camera.

A new call-screening feature lets the Google Assistant pick up the phone and listen in to see if the call is spam or a telemarketer.

Google showed off a new $79 wireless charger specifically for Pixel 3. When it is on the charger, the display changes and brings the Google Assistant to the forefront, turning it into something like a mini smart speaker.

The event streamed online, and you can watch it below.