The University of Washington’s biggest research ship is getting loaded up with scientists, supplies and an underwater robot after an extensive multimillion-dollar makeover that’s designed to add 25 more years to its current quarter-century of operation.

And the crew of the 274-foot R/V Thomas G. Thompson can hardly wait to set sail.

“It’s been a long 18 months in the shipyard,” Brian Clampitt, one of the UW crew’s able-bodied seamen, told GeekWire today. “We’re looking forward to getting back to work.”

Clampitt and his mates never stopped working during the refit, most of which was done at Vigor Marine’s Seattle shipyard. But the crew’s duties on land can’t compare with getting back to the sea.

“We’re a bunch of sailors. We’re dying to get underway,” said Jenny Nomura, one of the crew’s marine technicians.

This is no pleasure cruise: The Tommy Thompson is built to carry a crew of 21, plus up to 36 researchers, on ocean outings that can last for weeks.

It’s due to depart from Seattle on Monday morning, heading for New Zealand and an expedition led by the Woods Hole Oceanographic Institution to study the Brothers undersea volcano in the Pacific. “This is a volcano we don’t know very much about,” UW’s manager of marine operations, Doug Russell, told journalists during today’s tour.

As Russell spoke, the crew was loading a boxy container-sized lab onto the Thompson’s deck. Oceanographer Masako Tominaga explained that the lab would serve as the control center for Woods Hole’s Jason remotely operated vehicle as it captures video of the volcano, makes measurements and collects samples.

“It’s the center of the science action,” Tominaga said. 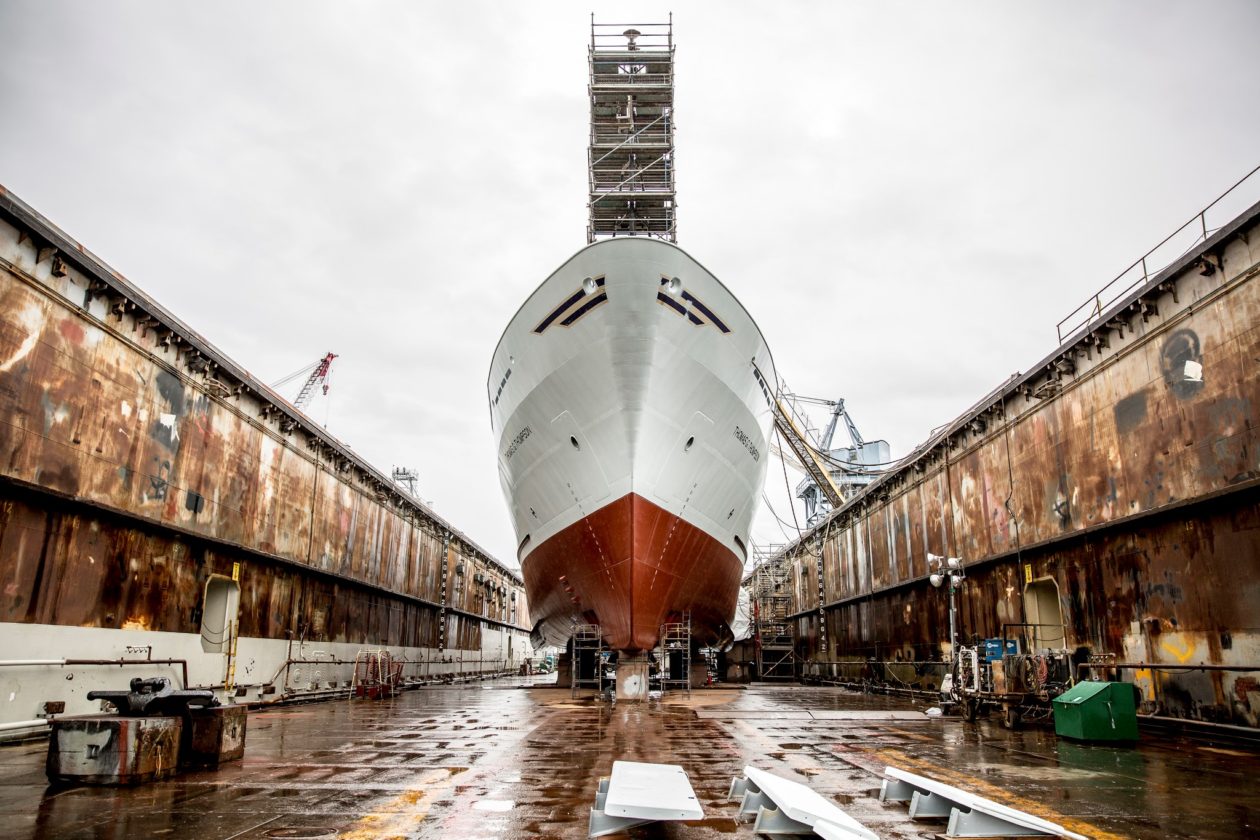 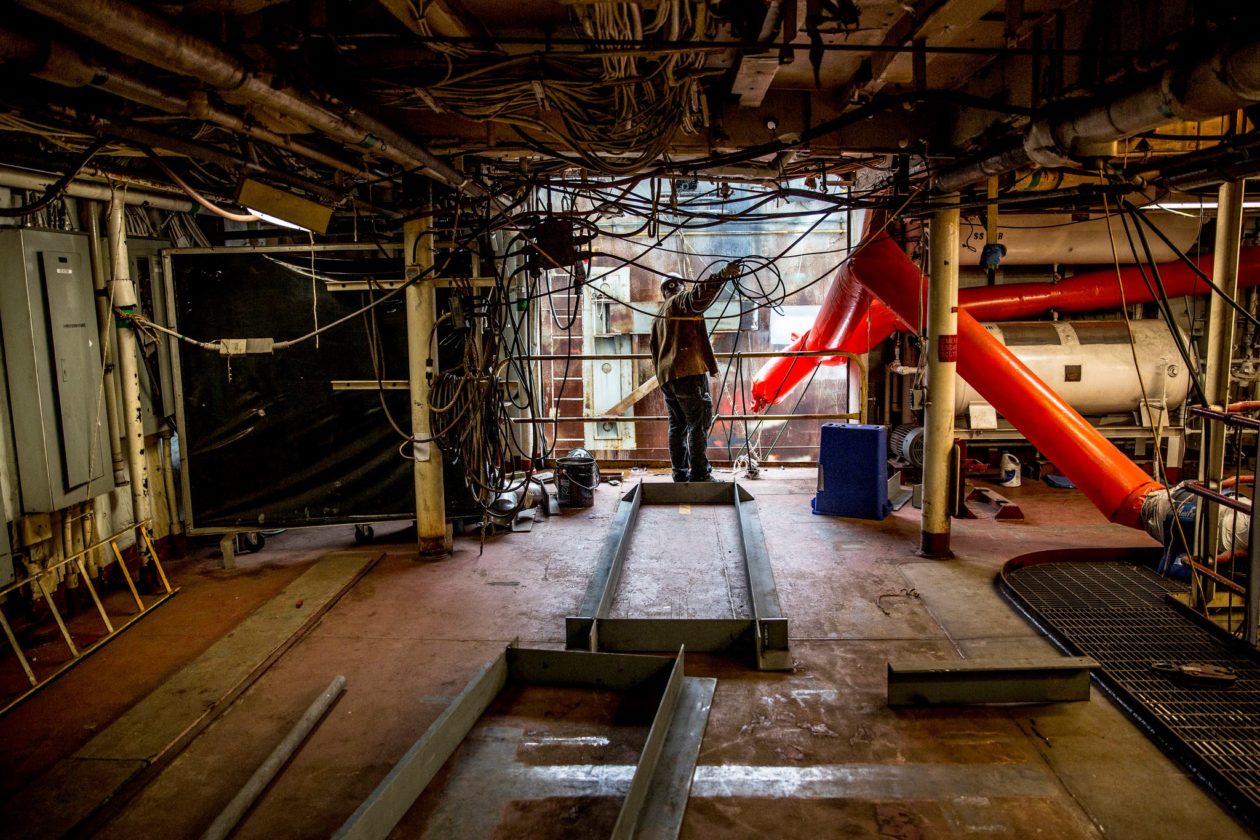 During the Thompson’s makeover, much of the engine room machinery was removed and replaced through an access point cut into the side of the ship. (UW Photo / Dennis Wise) 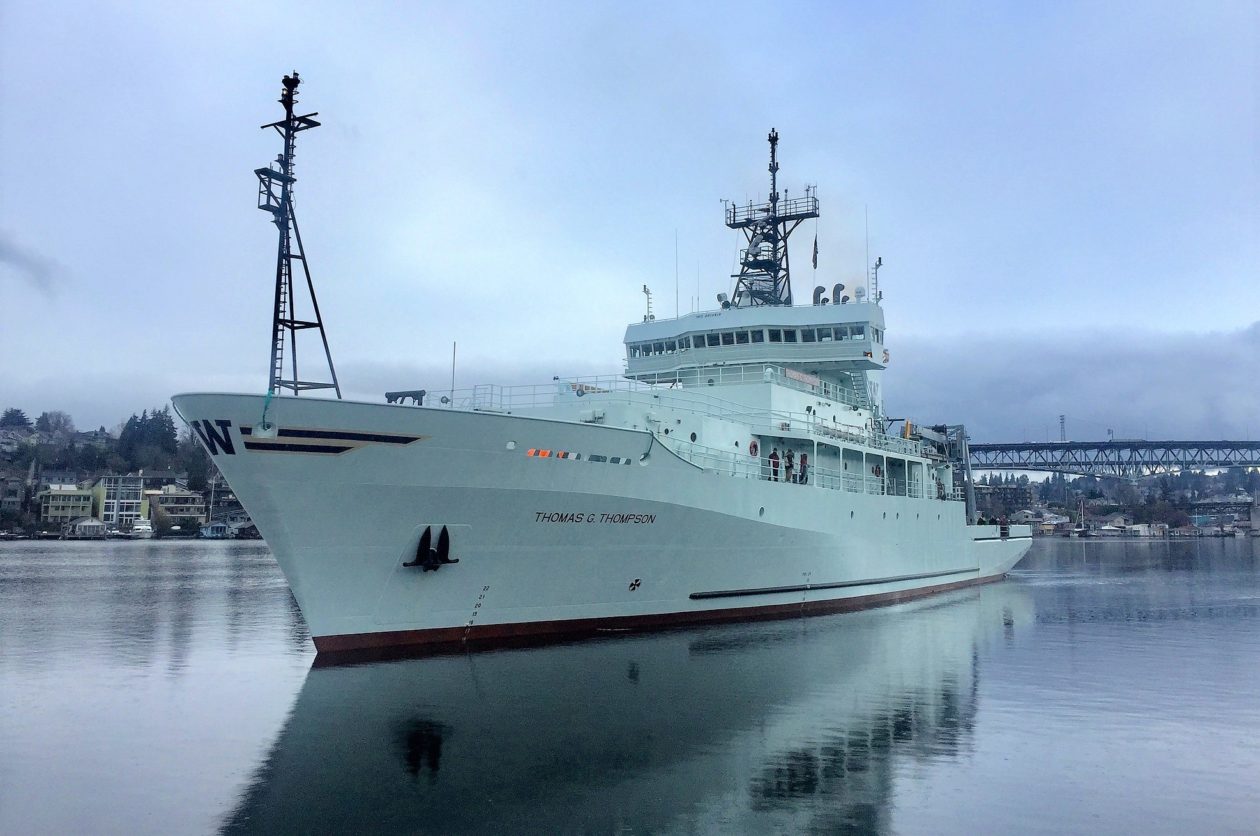 The newly refurbished Thompson returns to its home dock at the University of Washington. (UW Photo / Dennis Wise)

A panoramic photo shows the R/V Thomas G. Thompson being loaded up in preparation for its first research voyage after an 18-month makeover. (GeekWire Photo / Alan Boyle) 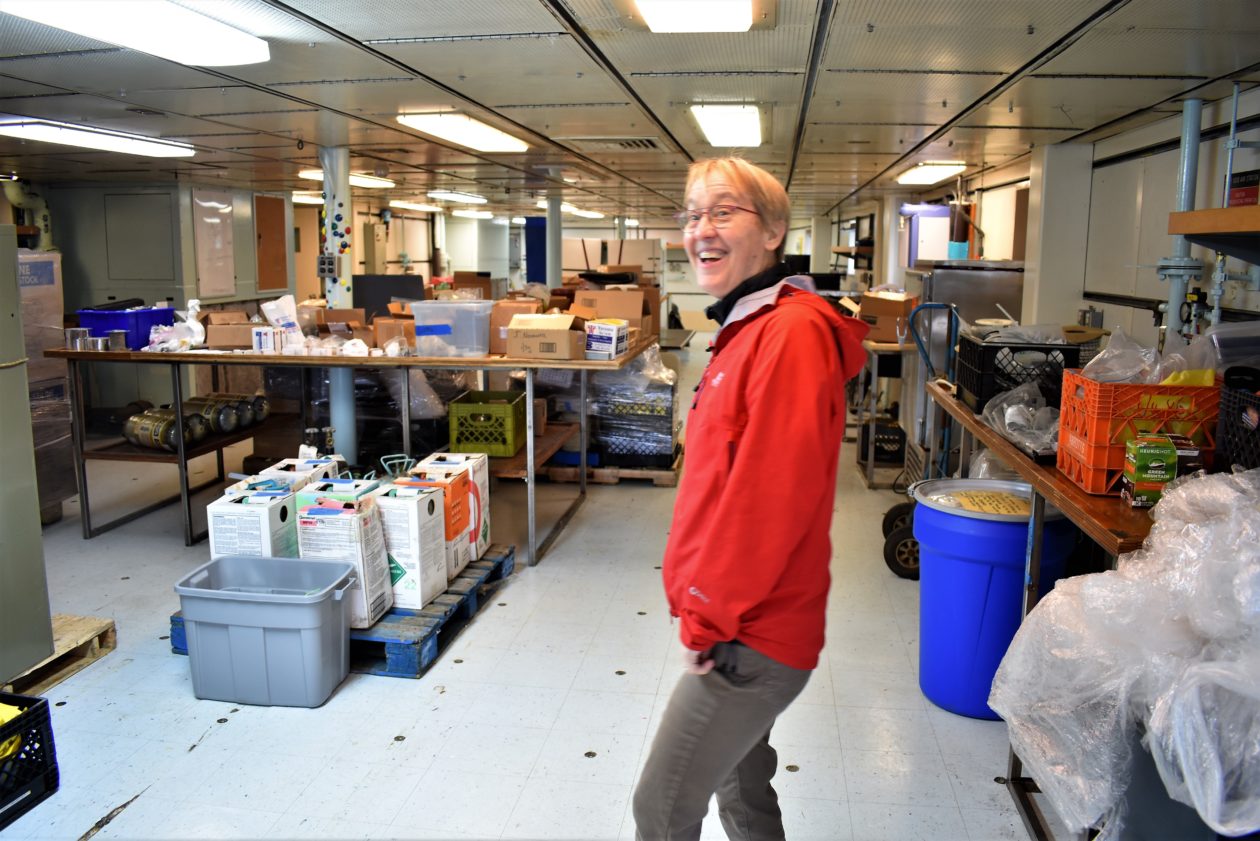 University of Washington oceanographer Ginger Armbrust shows off one of the lab spaces aboard the Thompson. (GeekWire Photo / Alan Boyle) 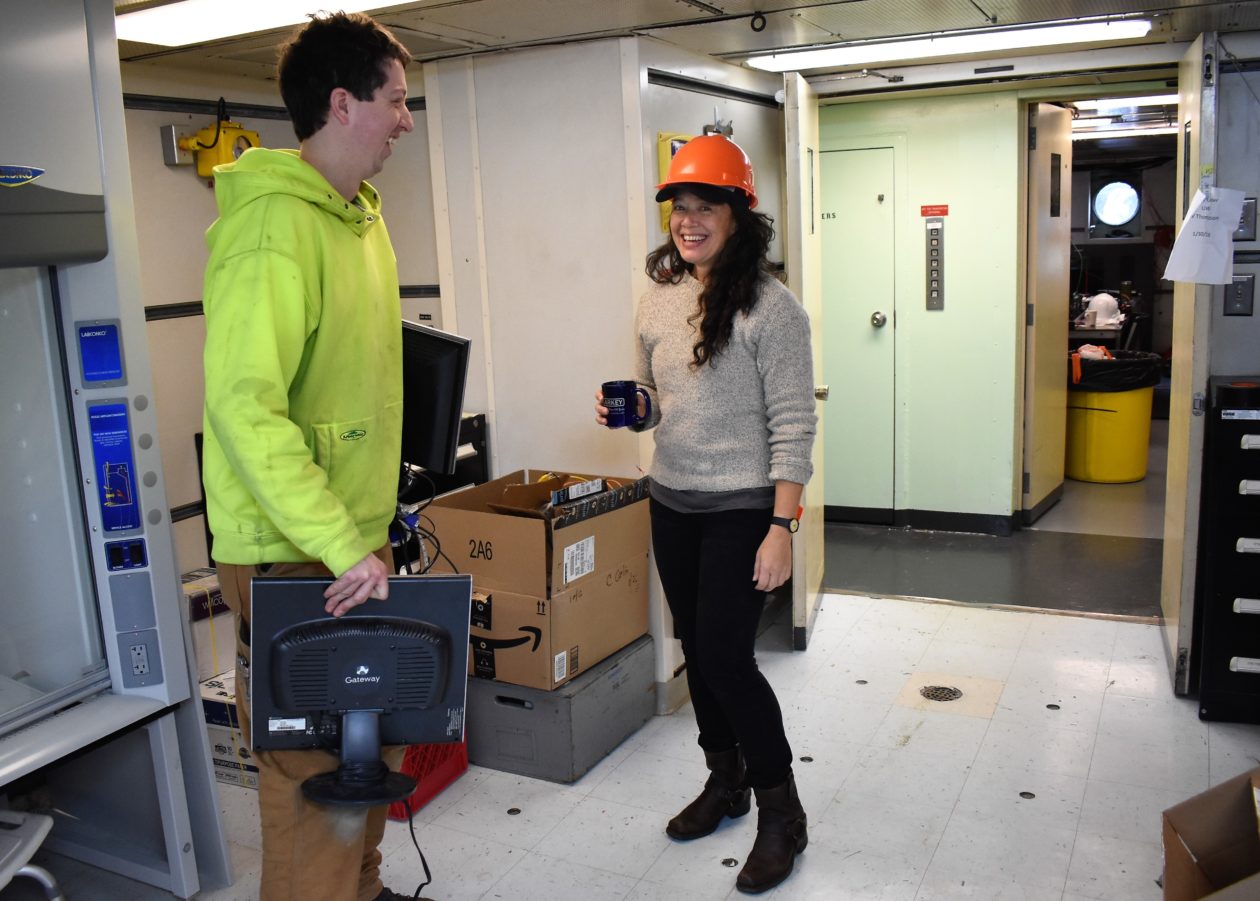 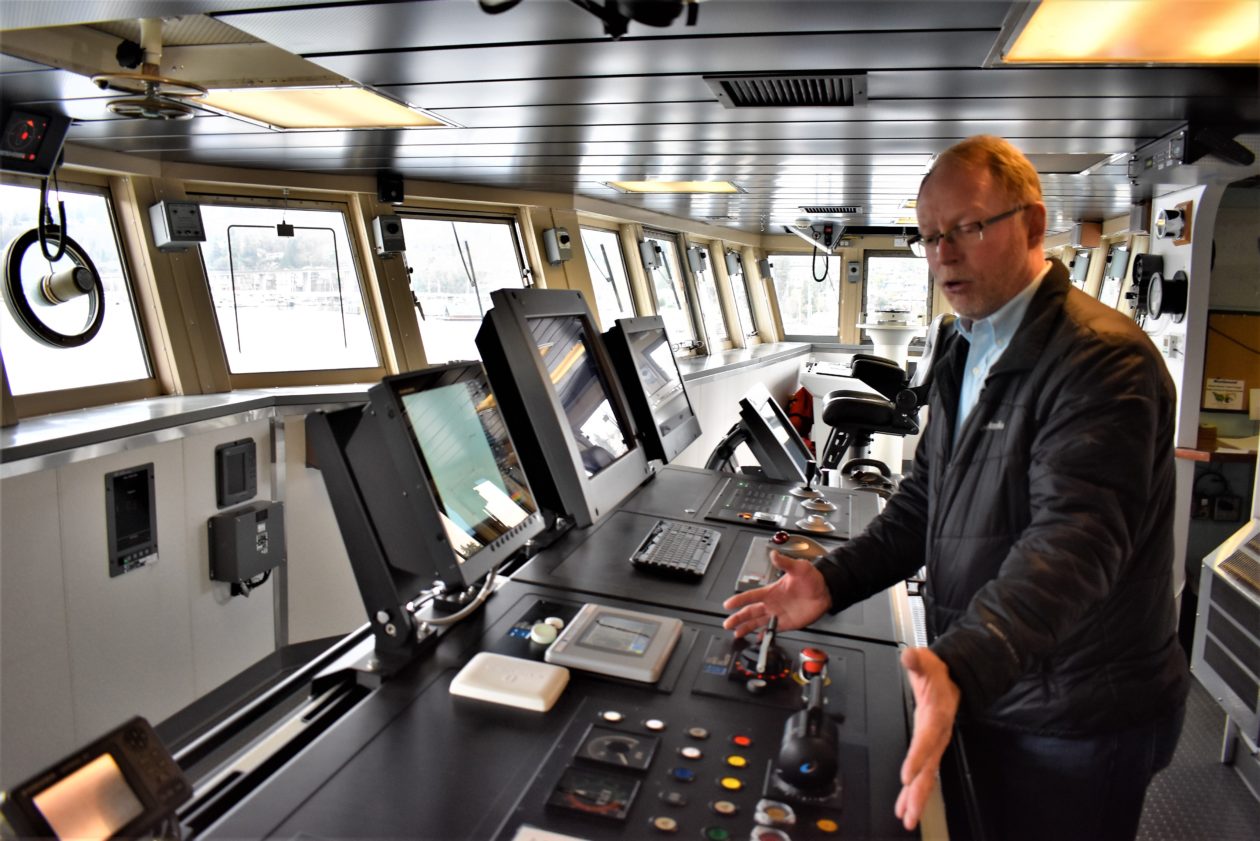 Doug Russell, manager of marine operations for the UW’s School of Oceanography, shows off the high-tech controls on the bridge of the Thompson. (GeekWire Photo / Alan Boyle) 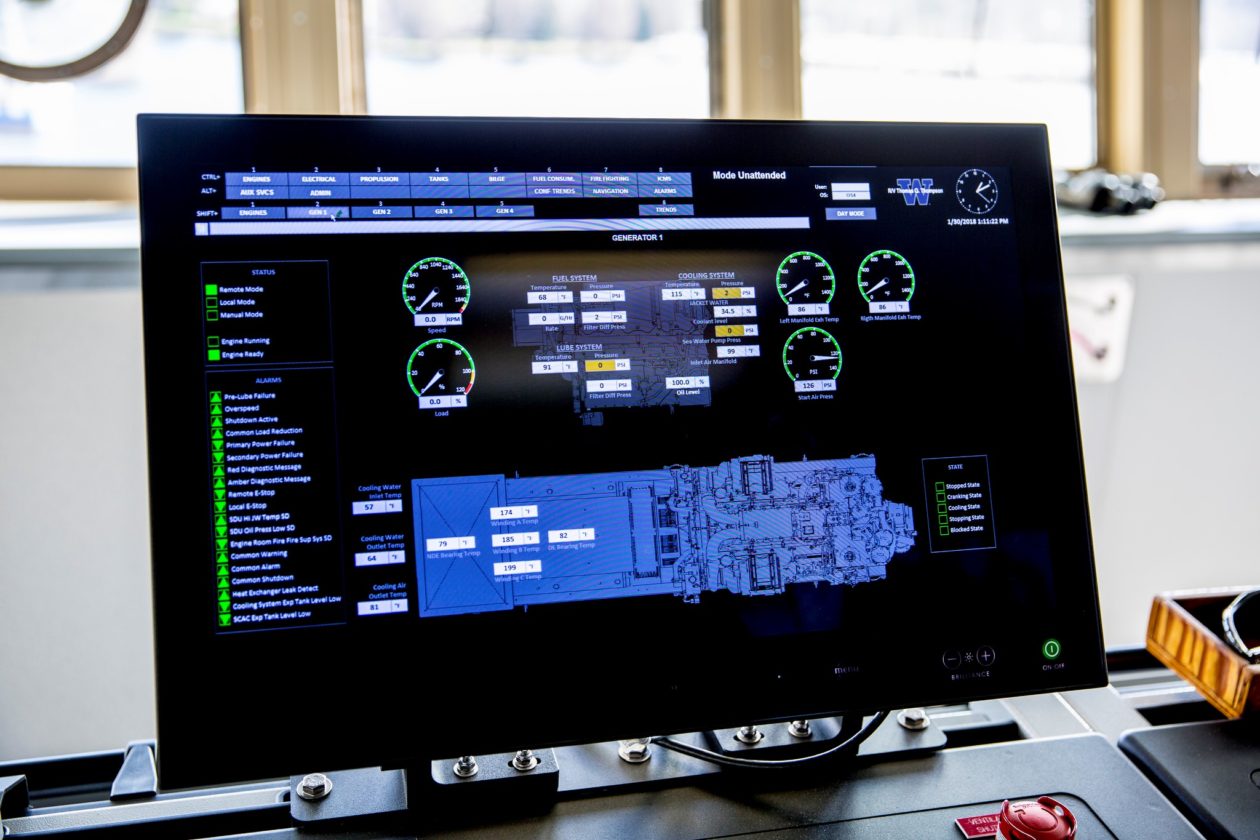 Digital controls monitor each of the vessel’s propulsion engines as well as other aspects of the ship’s engineering systems. (UW Photo / Dennis Wise) 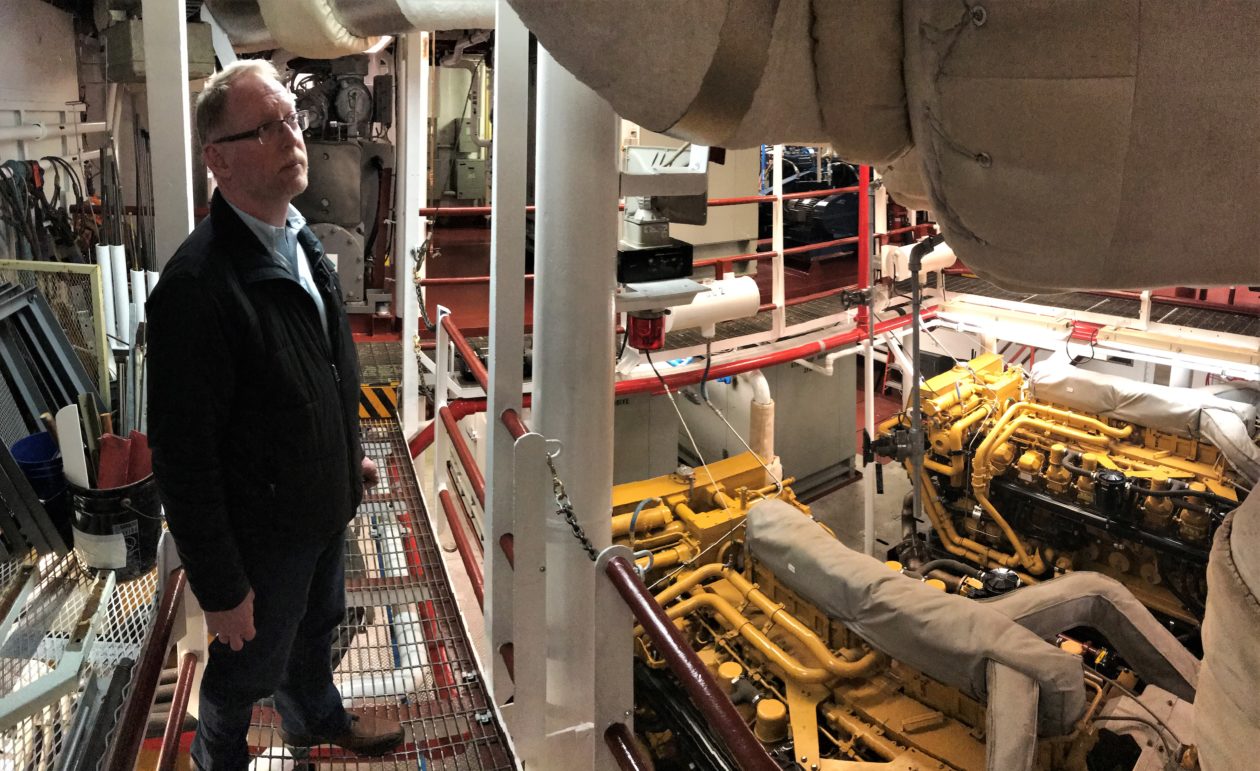 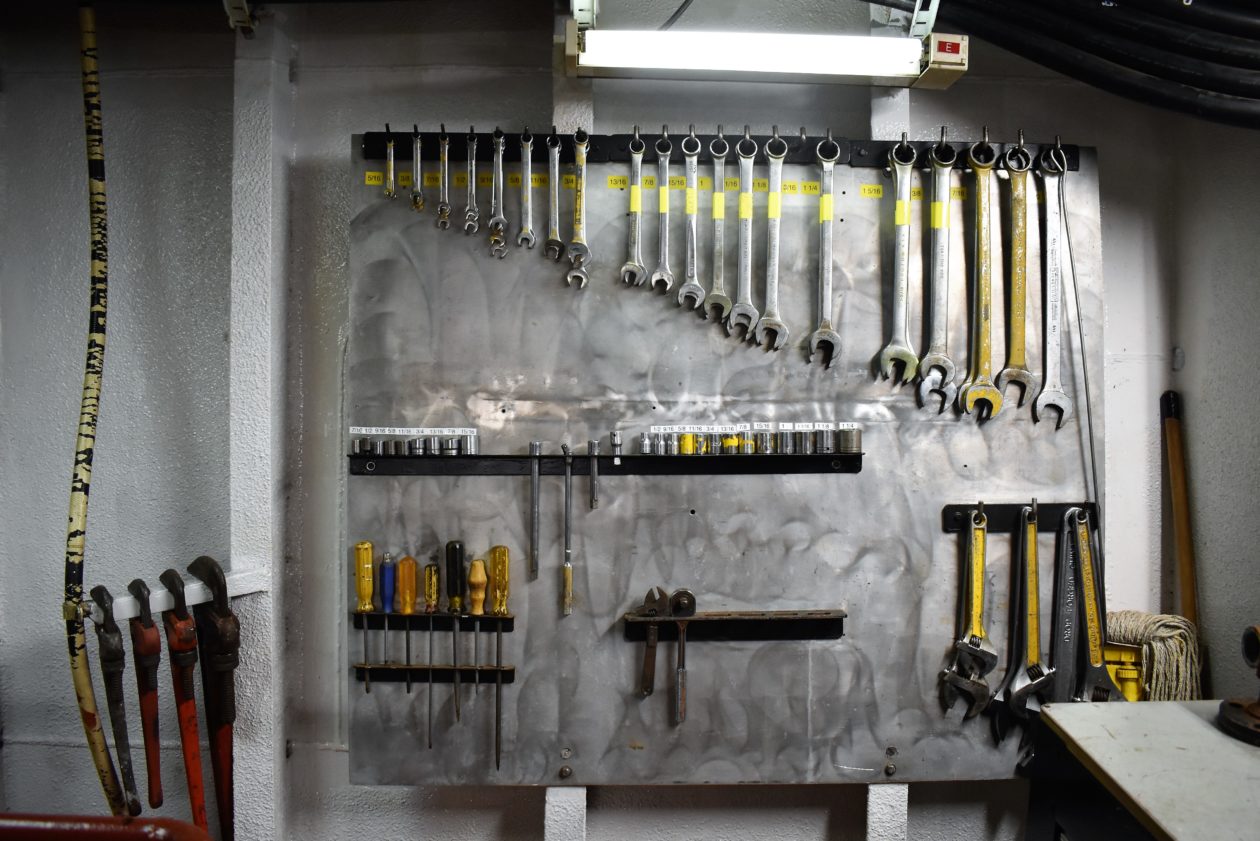 Wrenches are lined up on a wall in the Thompson’s engine room, ready for use. (GeekWire Photo / Alan Boyle) 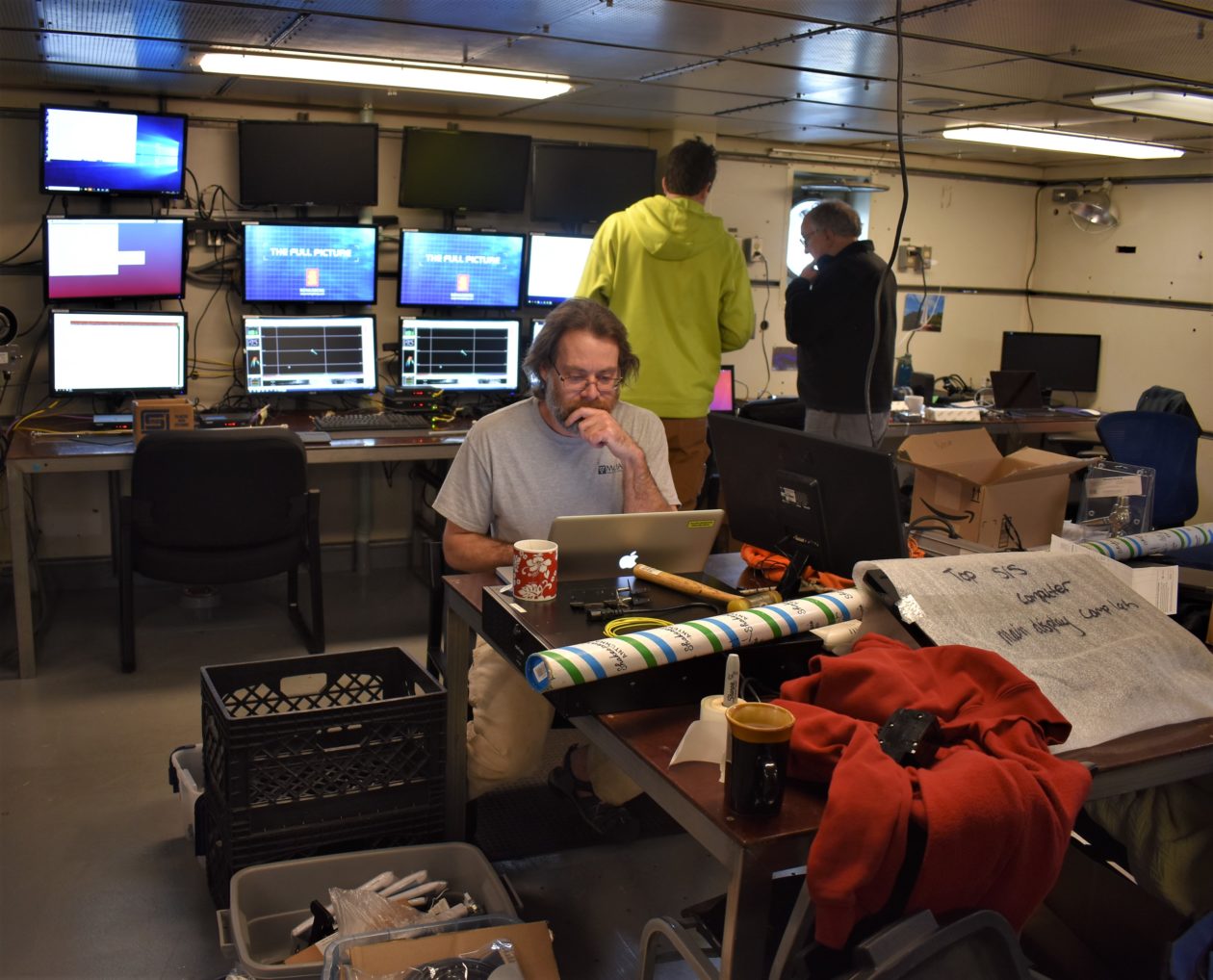 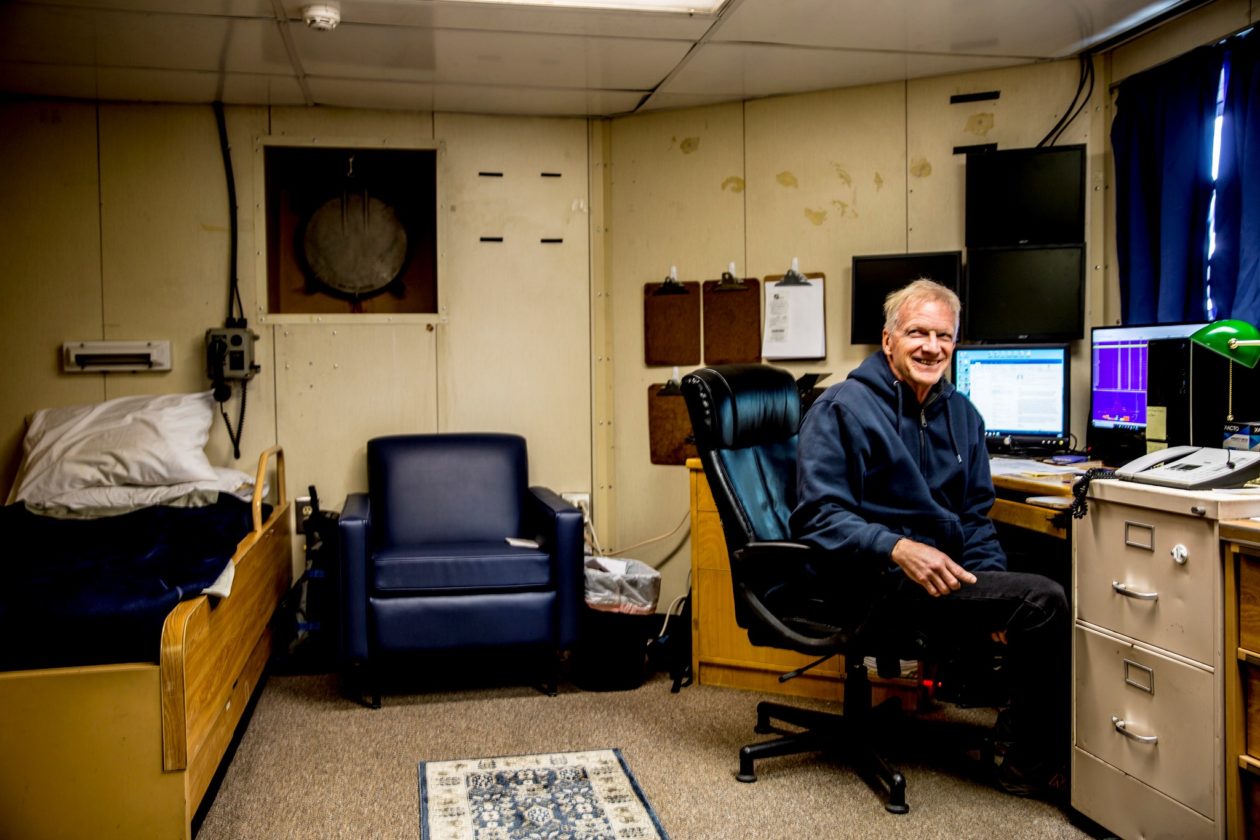 The Thompson is one of more than 20 ships in a fleet managed by the University-National Oceanographic Laboratory System, or UNOLS. The ship is owned by the Office of Naval Research but operated by UW in coordination with UNOLS, and researchers from any participating institution can apply to conduct marine experiments.

The ship was delivered to the Navy in 1991 and is named after the late UW chemist and oceanographer Thomas Gordon Thompson. Its notable missions include the construction of the Ocean Observatories Initiative’s undersea sensor network in the Pacific, known as the Cabled Array. installation, and a 2015 expedition to the volcanically active Axial Seamount, 300 miles off the Oregon Coast.

Russell said the Thompson was badly in need of an upgrade. “Our old controls basically belonged in the Smithsonian,” he said. Parts were starting to break, and replacement parts were no longer available.

In mid-2016, the ship went in for a stem-to-stern rebuild that included new, more efficient diesel-electric engines, more than six miles of new cabling, thousands of feet of replaced plumbing, new lab equipment, updated refrigeration and air conditioning systems, a new fiber-optic data network, a new bottom-mapping sonar, and computerized controls for the bridge and the engine room.

“This computer is actually smarter than humans,” Russell said, explaining that the control system automatically compensates for the shifts in current detected by the ship’s sensors.

Getting email during a voyage will be easier, thanks to upgraded satellite links, but don’t expect to be streaming Netflix: The entire complement of passengers and crew has to share bandwidth that amounts to 2 megabits per second for downloads, and 256 kilobits per second for uploads. (Broadband cable connections are typically 10 to 100 times faster.)

The makeover’s $53 million cost was paid by UW, the Office of Naval Research and the National Science Foundation. Russell, a retired Coast Guard captain, said that’s a better deal than trying to fund a whole new ship. (For what it’s worth, one of the most recent additions to UNOLS’ fleet, the 238-foot R/V Sally Ride, cost $89 million.)

The Brothers expedition is just the first in a series of research voyages in the Pacific Ocean, Indian Ocean and Southern Ocean that are booked well into next year. That means it’ll be at least that long before the Thompson returns to its Seattle homeport. The ship typically pulls into different ports to let one group of scientists and their experiments get off, and then bring the next group on board.

Ginger Armbrust, who chairs UW’s School of Oceanography, is already planning for her turn — during which she and other researchers will be studying the role played by microbial communities in recycling the ocean’s chemical compounds.

One of the perks is that she gets to bring her students along for the ride. “I guarantee that anytime you take an undergraduate out to sea, it’s transformative,” she said.

Other experiments will focus on undersea seismic activity, the exotic life forms that thrive in the superheated water around hydrothermal vents, and the effects of climate change on the world’s oceans.

“You name it, we’re going to be doing it,” Russell said.