What better way to celebrate the 61st anniversary of the start of the Space Age than to see the successful return of U.S. and Russian spacefliers from orbit?

NASA astronauts Drew Feustel and Ricky Arnold, along with Russian cosmonaut Oleg Artemyev, touched down in the steppes of Kazakhstan at 5:44 p.m. local time (4:44 a.m. PT) today, 61 years after Russians sent their Sputnik satellite into space to kick off the U.S.-Soviet space race.

The landing came hours after the trio’s departure from the International Space Station aboard a Russian Soyuz spacecraft. Their tour of duty in space amounted to 197 days, highlighted by three spacewalks undertaken by Feustel and Arnold to replace and upgrade space station equipment.

Artemyev got in on some spacewalk action as well. He went on an outing with Russian crewmate Sergey Prokopyev in August, during which they tossed four nanosatellites into orbit. 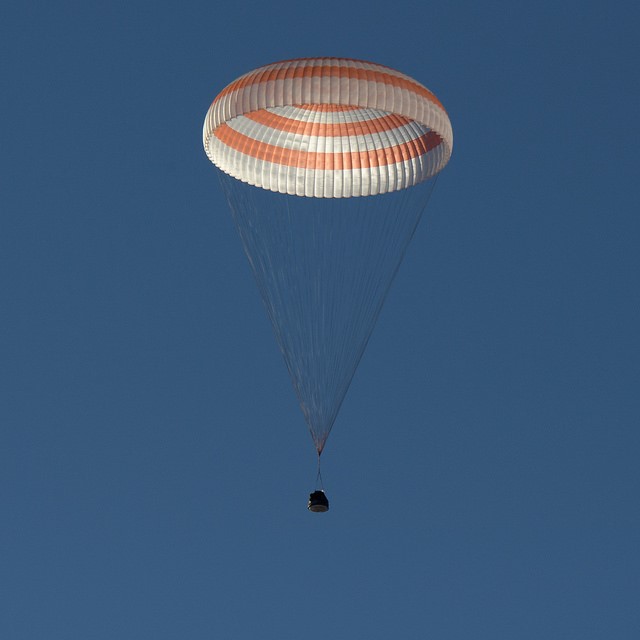 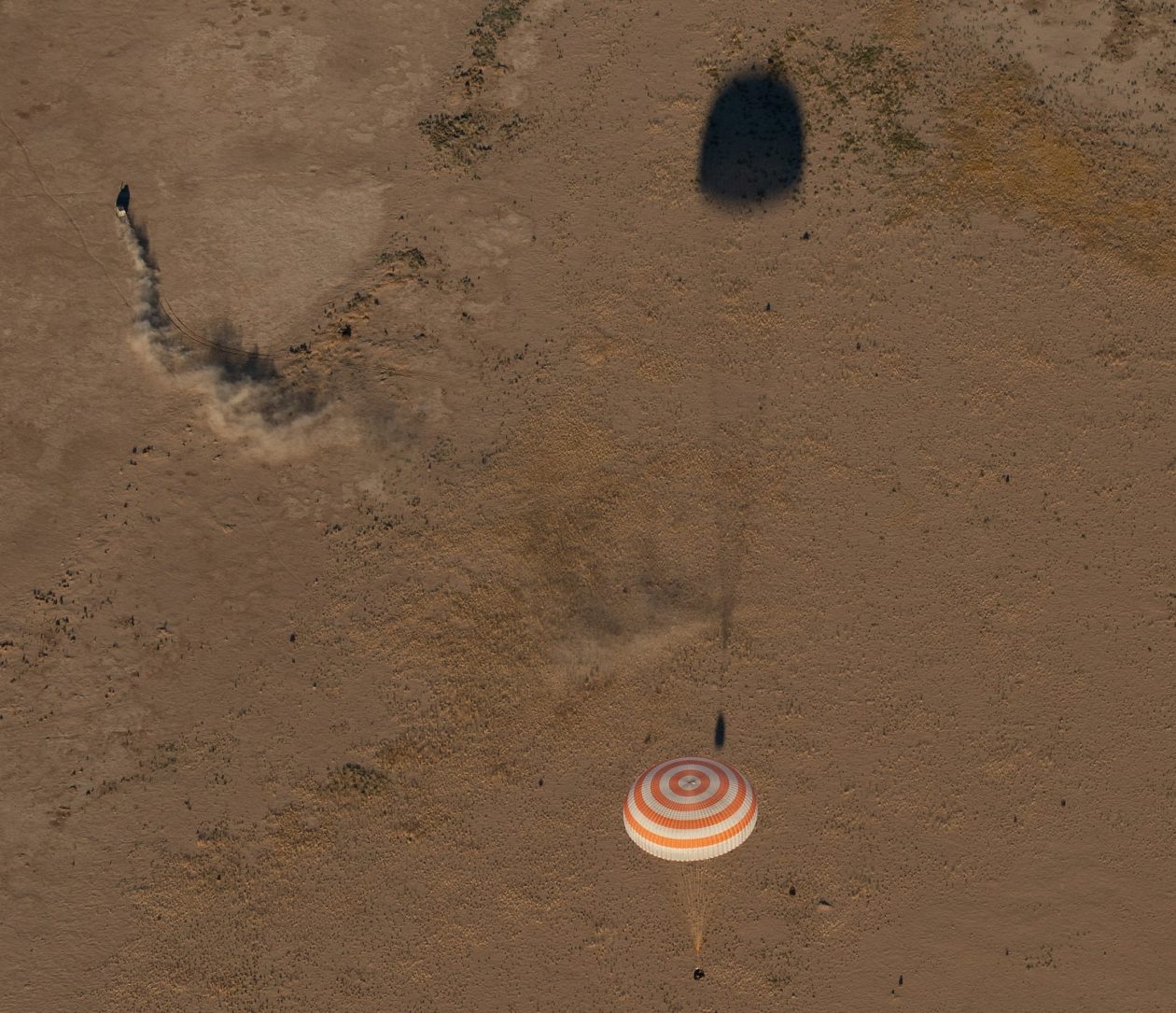 The Soyuz is framed by shadows and flares during its descent. (NASA Photo / Bill Ingalls) 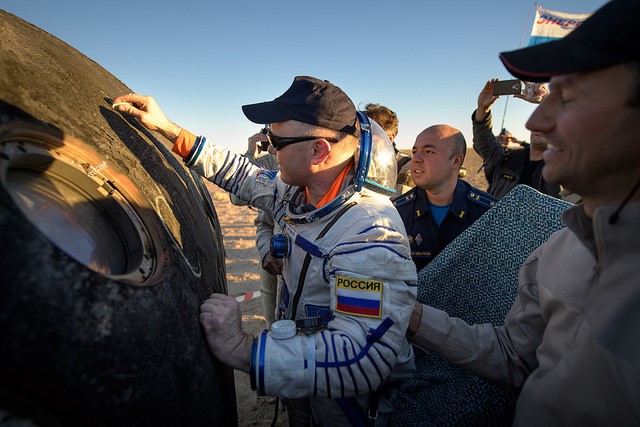 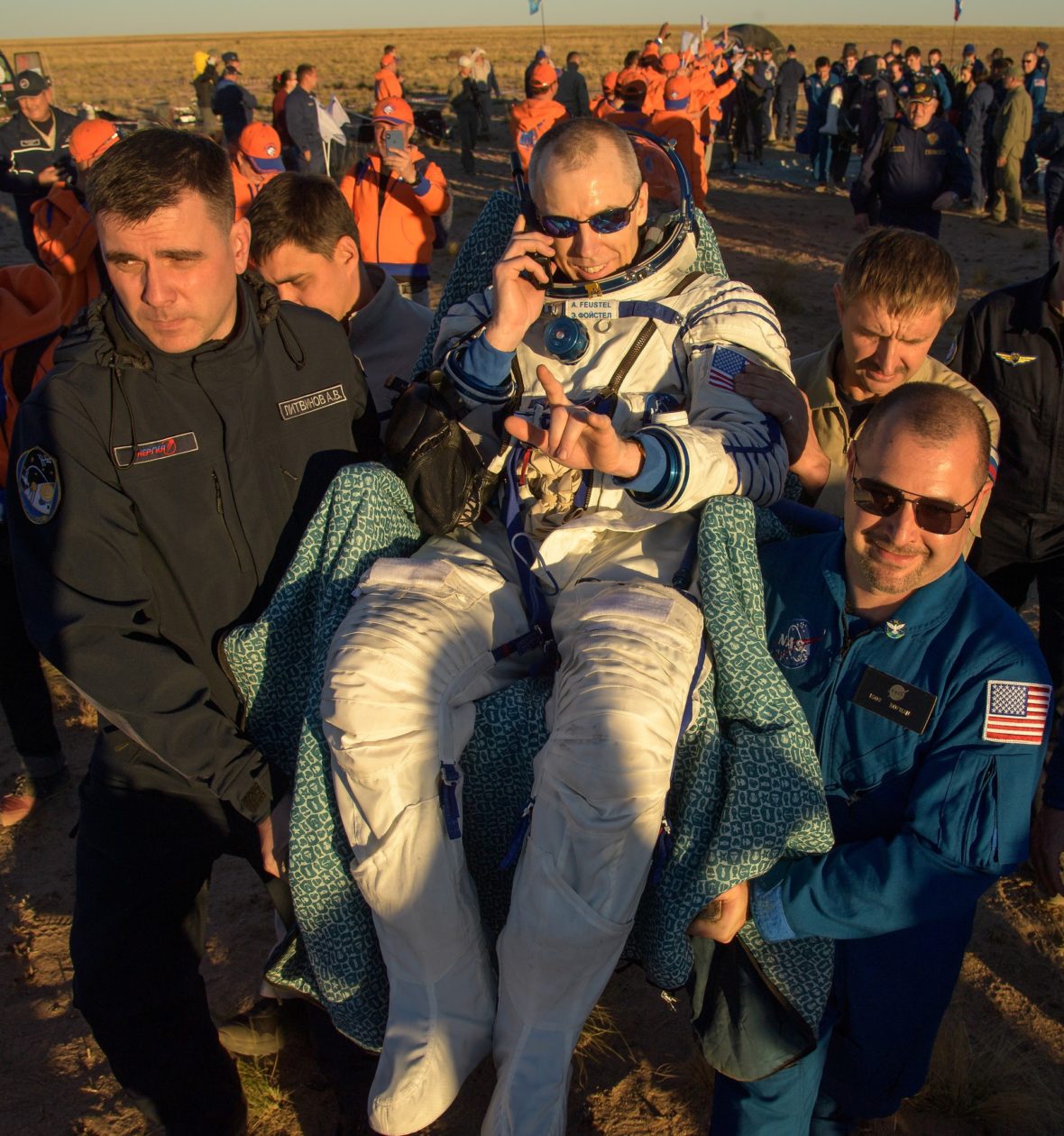 NASA’s Drew Feustel is carried away from the Soyuz landing site, as is customary for spacefliers returning from zero-G. (NASA Photo / Bill Ingalls) 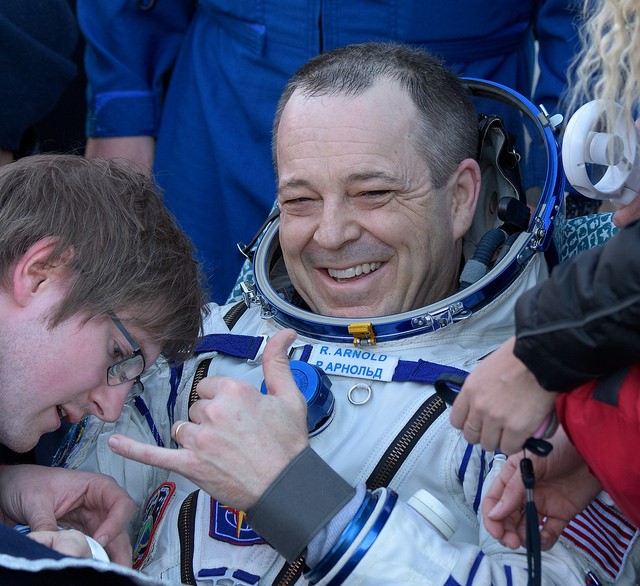 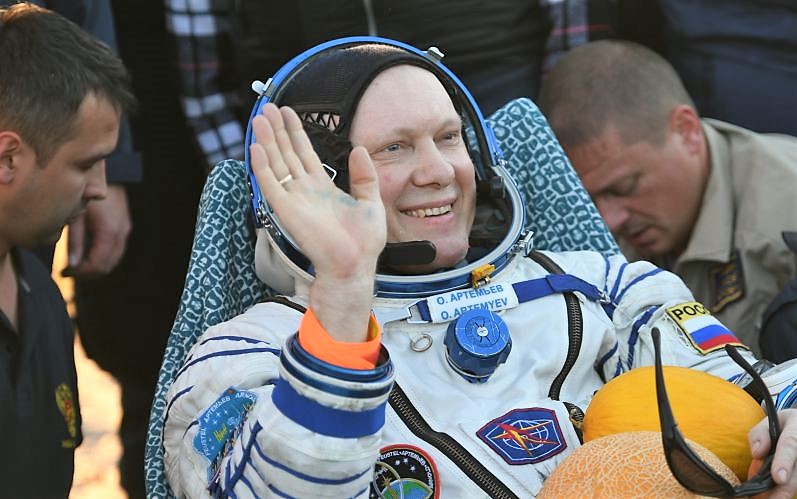 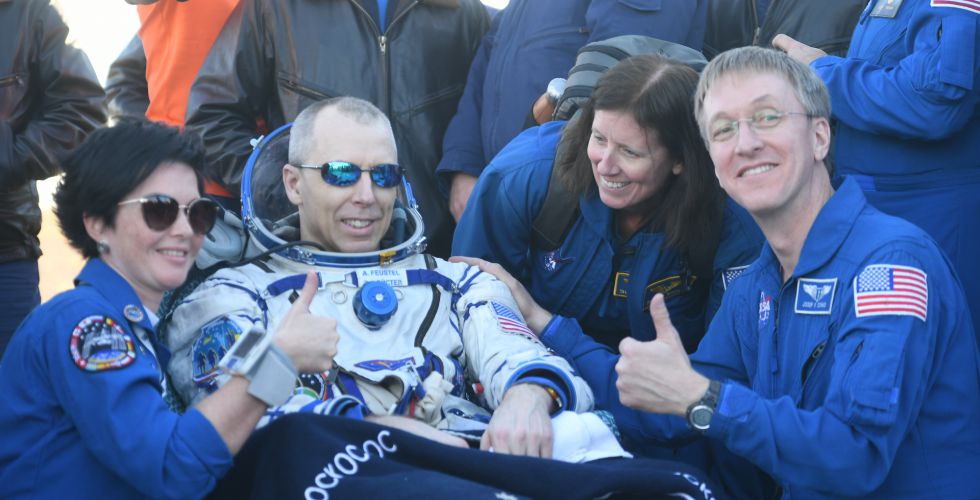 Astronaut Drew Feustel is surrounded by NASA colleagues after his return to Earth. (Roscosmos Photo)

The trio’s departure leaves three crew members aboard the space station, headed by German astronaut Alexander Gerst, who took over the commander’s role from Feustel. Prokopyev and NASA’s Serena Aunon-Chancellor fill out the current crew.

NASA’s Nick Hague and Russia’s Alexey Ovchinin are due to ride another Soyuz to the station on Oct. 11 — an arrival that will boost the crew back to five.

The flight is proceeding despite an episode sparked by the detection of an air leak aboard a Soyuz spacecraft that launched in June. This week, Russian space chief Dmitry Rogozin said that leak wasn’t caused by a manufacturing defect, reviving rumors about potential sabotage.

NASA issued a statement on Wednesday to quell the rumors.

“Ruling out a manufacturing defect indicates that this is an isolated issue which does not categorically affect future production,” NASA said. “This conclusion does not necessarily mean the hole was created intentionally or with mal-intent.”

NASA and the Russian space agency are continuing to investigate the incident, and NASA said there are tentative plans to conduct a spacewalk next month to gather more information. NASA’s statement seems to suggest that the hole could have been created accidentally and was patched up during preparations for launch.

Sputnik’s launch isn’t the only reason why Oct. 4 is a red-letter day in space history: Today also marks the 14th anniversary of the SpaceShipOne flight that won the $10 million Ansari X Prize for private-sector spaceflight.