Is Amazon Web Services going to be the Google of cloud computing?

About 15 years ago, Google’s search technology catapulted it ahead of other search engines into a place atop the web advertising market it has never relinquished, despite strong attempts from smart and deep-pocketed competitors. Now, in a very different market, Google finds itself looking up at AWS, which wrapped up the first half of 2018 with an extremely strong performance after nearly a decade of dominance, according to new data from Synergy Research.

Cloud market share is a little tricky to pin down, given the lack of public data provided by Microsoft and Google about their cloud infrastructure divisions and the increase in multicloud deployments. But in the second quarter, Synergy Research estimated that AWS enjoyed a 34 percent share of the cloud infrastructure market (which in their accounting includes platform services and hosted private cloud), increasing its share slightly thanks to a quarter during which it managed to grow faster than in previous quarters despite that big lead.

Synergy did not provide exact estimates for Microsoft or Google, but ranked them second and fourth, respectively, in the cloud infrastructure market behind AWS. IBM slots into third place by virtue of its hosted private cloud business, which most industry observers consider quite different than the public cloud services provided by AWS, Microsoft, and Google.

According to research from Gartner released this week that looked at 2017 worldwide market share for infrastructure services only, AWS had 51 percent of the market with $12.2 billion in revenue. In this analysis, Microsoft gained several points of share but is still way behind AWS with 13.3 percent of the market, while Google trails Alibaba.

This competitive positioning has been in place for several years now, and attempts by also-rans like Oracle and Rackspace (which has basically given up on public cloud services) to carve out some space have not really worked. And that’s despite the fact that the overall market continues to soar, which should theoretically lift everyone’s fortunes, but in practice has rewarded the incumbents. 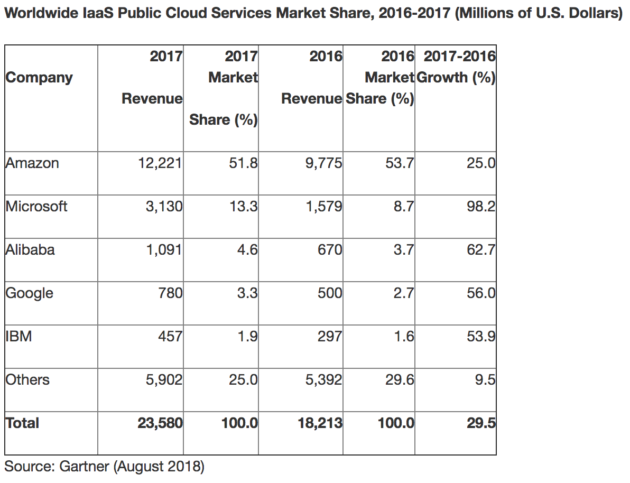 Not counting SaaS products like G Suite or Office 365, Synergy said buyers of cloud infrastructure services spent $16 billion in the second quarter of 2018, and that number is growing at a 50 percent clip, the same rate as this time last year. AWS alone recorded $6.1 billion in revenue during the second quarter, a 49 percent jump. In keeping with tradition, Microsoft declined to provide a specific number for Azure revenue but said it grew 89 percent, while Google said nothing about the financial performance of its cloud but doubled the number of people in attendance at its Cloud Next 2018 conference last week.

If these market dynamics continue as they have for the past several years, it will continue raise the barriers to entry for anyone who might attempt to challenge the cloud leaders. It takes an enormous amount of investment to create a cloud infrastructure network that can compete with AWS, Microsoft, or Google, and those three companies are investing billions of dollars in expanding and upgrading that infrastructure to attract customers.

Google almost doubled the amount of capital it spent on equipment — much of which goes to support its infrastructure — during the second quarter, spending $5.5 billion. Microsoft said it spent $4.1 billion during the quarter, and while AWS capital spend is harder to pin down thanks to the vast amount of money its corporate parent spends on warehouses, robots, and delivery infrastructure, but there’s no question it remains in the same ballpark as Google and Microsoft.

One possible outsider that could tilt the balance is Alibaba, which is the dominant cloud infrastructure provider in China and growing as fast or faster than its U.S. competition. Synergy noted that Alibaba still “has a long way to go” before it can match the breadth of the competition, and it remains unclear whether U.S. or European businesses will be interested in using cloud services provided by a company with strong ties to the Chinese government. But the company is clearly gaining share worldwide, as noted by Gartner’s research.

So until then, AWS remains in firm control of the cloud market. Microsoft and Google are serious cloud players with reams of money and some of the best engineers in the world, but AWS has those qualities, too, and its first-mover advantage has lingered well into its second decade.