While many physical retailers have closed stores or gone out of business with the rise of e-commerce, Starbucks has been “the rare exception.”

That’s what Starbucks CEO Kevin Johnson said today at the company’s annual shareholders meeting in Seattle, where 3,500 gathered at McCaw Hall to get an update on the coffee giant’s future.

Johnson, a respected veteran tech executive who replaced Howard Schultz as CEO in 2016, said that more brick-and-mortar retailers closed last year than in any period in U.S. history. Starbucks, meanwhile, has added 10,000 physical stores in the last five years while growing its annual revenue by $9 billion. 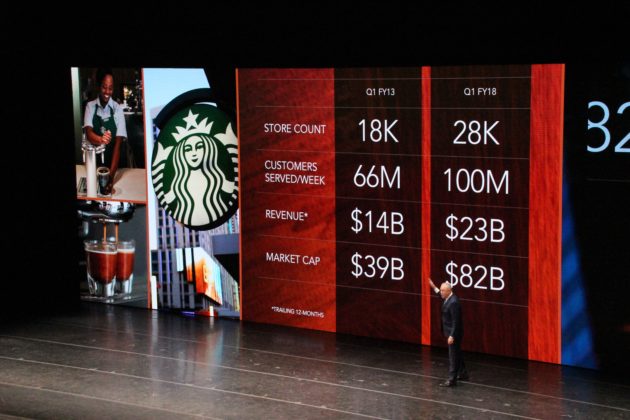 Johnson talked about the company’s investment in mobile technology. More than 30 percent of Starbucks’ U.S. transactions are now paid via mobile.

Starbucks is making its mobile order-ahead app feature, which lets customers order with their smartphone via Starbucks’ app and skip the line, available to anyone this month. Previously, it was accessible only to the company’s 15 million U.S.-based rewards members — now an additional 60 million monthly customers can use the technology.

The mobile order-ahead feature accounted for 11 percent of transactions in the U.S. last quarter. 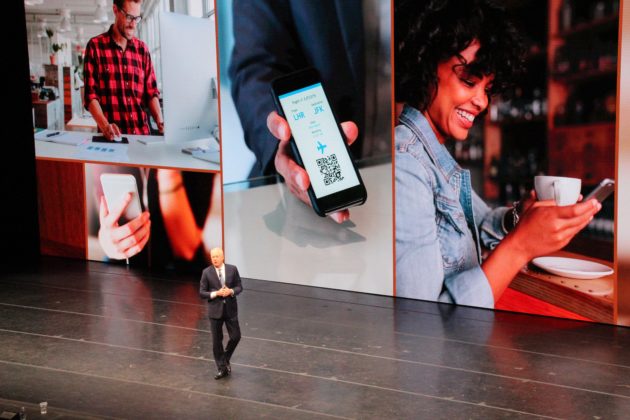 Johnson noted that some in the industry say companies today must focus on either community or convenience and that doing both is impossible.

“We reject that thinking,” he said. “We do not buy into this false tradeoff.”

At the 2017 GeekWire Summit, Johnson talked about how Starbucks ties together a physical store experience with digital innovation.

“One, you must be focused on experiential retail that creates an experience in your store that becomes a destination for the customer,” Johnson said in October. “And number two, you have to extend that experience from brick-and-mortar to a digital-mobile relationship. So our approach to this is investing in elevating the experience we create in our stores, and investing in the digital-mobile connection we have with our customers.” 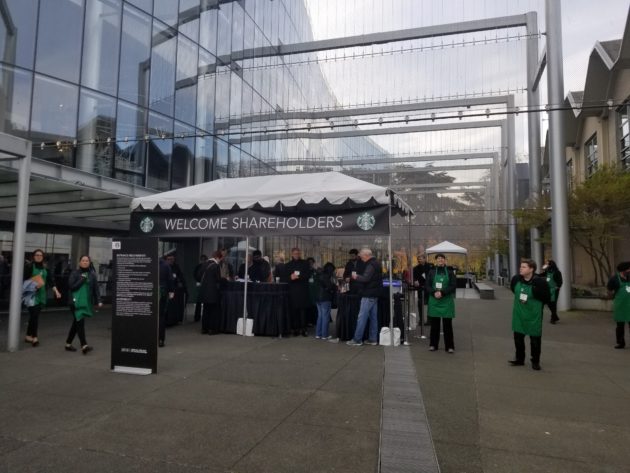 Starbucks’ stock price has remained flat over the past three years as growth has slowed. The company is investing heavily in China, where it is opening a new store every 15 hours.

Starbucks also announced on Wednesday that it has eliminated gender pay gap in its U.S. workforce and that it will commit $10 million to support the development of recyclable, compostable coffee cups.

Stay tuned for more from the shareholders meeting.