That’s one of the questions raised by a provision in SiriusXM’s agreement to acquire the music service for $3.5 billion, announced this morning. The companies say the deal will create the “world’s largest audio entertainment company,” and Pandora will continue to operate as it currently does following the close of the deal.

Here’s what the provision says, according to the announcement from the companies.

The merger agreement provides for a “go-shop” provision under which Pandora and its Board of Directors may actively solicit, receive, evaluate and potentially enter negotiations with parties that offer alternative proposals following the execution date of the definitive agreement. There can be no assurance this process will result in a superior proposal. Pandora does not intend to disclose developments about this process unless and until its Board of Directors has made a decision with respect to any potential superior proposal.

The combination has implications for a wide variety of players in technology and digital music, including Seattle-area companies Amazon, Microsoft and Napster (Rhapsody International), in addition to Apple, Google, Spotify, iHeartRadio, Soundcloud and others. But an acquisition of Pandora could also make sense for a company in a complementary industry, such as a telecom or another tech sector.

Why would anyone buy Pandora? The company is known for its pioneering technology, the Music Genome Project, that personalizes song selection based on user preferences. But in terms of numbers, the real prize is its base of monthly active users: more than 70 million, including 65 million ad-supported listeners and 6 million premium subscribers. Pandora, based in Oakland, Calif., posted a net loss of more than $518 million in 2017, on revenue of more than $1 billion. 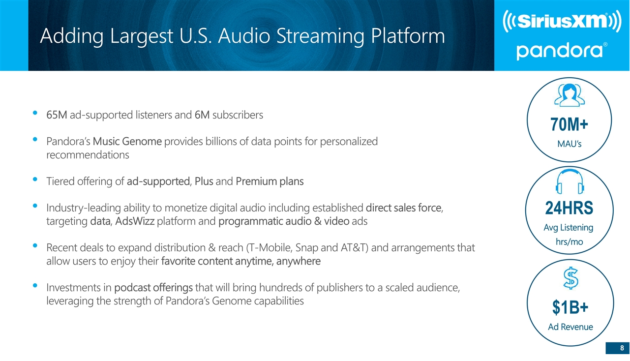 Roger Lynch, the former Sling TV CEO, took over as Pandora CEO last year. Brian McAndrews, the former aQuantive CEO with roots in the Seattle region, was the Pandora CEO for more than two years prior to leaving in March 2016.

The boards of the companies have approved the deal, and absent a better offer, they say it should close in the first quarter of next year.

Executives are holding a call now with investors and analysts. Here’s the full slide deck on the deal.