Yet the music service originally known as Rhapsody was the streaming pioneer. It had the early technology lead. It even has the name “Napster,” after acquiring and adopting one of the best-known brands in digital music. Under the corporate umbrella of Rhapsody International, the Seattle-based company seemed perfectly positioned to be where Spotify is today.

It’s not, and it’s one of those imponderables that puzzles many streaming media observers, including me. I’ve been a Rhapsody/Napster subscriber since 2013.

This new series by contributing writer Frank Catalano examines the evolution of digital content, from creation to consumption, and the technology transforming it.

Spotify went public in early April through a direct listing that bypassed the traditional institutional build-up to an IPO. At the end of its first day of trading, the Sweden-based streaming music company was valued by the market at an estimated $27 billion.

Okay, so forget the money. (Amazon was notoriously unprofitable for years, until it wasn’t.) What’s eye popping was Spotify’s paying subscriber base. That same prospectus noted that across the 65 countries and territories in which Spotify operates, it had 71 million premium subscribers at the end of 2017 — a number, it said, “we believe is nearly double the scale of our closest competitor, Apple Music.” 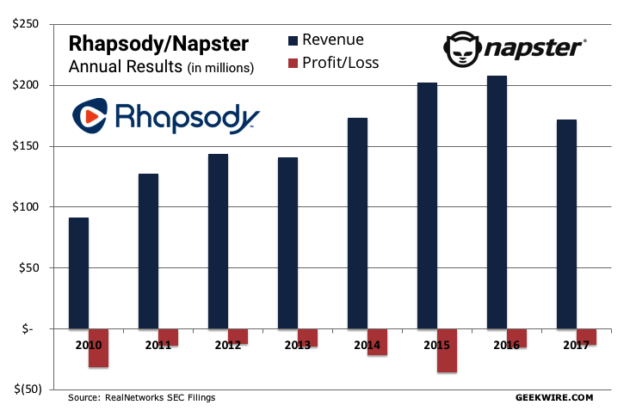 Well, it also loses money, just not on the same scale. Though Napster or its parent Rhapsody International don’t merit a single mention in Spotify’s prospectus, some Napster numbers are part of RealNetworks’ annual report.

RealNetworks, the Seattle-based digital media company, still owns more than 40 percent of privately held Napster after spinning it off in 2010, so it reports the music service’s basic financials to its investors. That’s how we know that Napster lost just over $13 million in 2017, an improvement over its $15 million loss in 2016. After three years of growth, however, revenue declined to $172 million in 2017 from $208 million in 2016.

A comparison of paying subscribers is difficult, because RealNetworks and Napster haven’t released any recent numbers. But David Sidebottom, principal analyst for Futuresource Consulting, told GeekWire, “Our estimate for Napster is in the 3 million range globally, below other multinational services including Spotify, Apple Music, Deezer, Google Play Music and Amazon Music Unlimited.”

In other words, the number one player — Spotify — may have had more than 20 times the number of paying Napster subscribers in 2017. Other estimates show a similarly wide gap. Based on streams that generate money for artists, The Trichordist gave Napster less than a 2 percent market share in 2017 in the U.S., well behind Spotify’s 52 percent.

The service known today as Napster certainly had the early advantage. Founded as Rhapsody in 2001 as part of Listen.com, it was widely credited as being the first on-demand streaming music subscription service offering unlimited access to lots of digital music for a flat monthly fee. RealNetworks acquired it two years later, then spun it off in 2010. Rhapsody subsequently bought the recognizable Napster name and its music service from Best Buy in 2011, long after the original Napster’s heyday of controversial peer-to-peer music sharing. Rhapsody re-branded its own service as “Napster” in 2016.

The Napster brand is arguably as well-known as Spotify’s even though, in a historical context, the original Napster was equated with pirated “free” music (a questionable first-mover advantage).

Yet the Napster of today seems to struggle. Beyond the financials and market share, a year ago it laid off an undisclosed number of staff. A new Rhapsody International CEO was named this February, coming from part-owner RealNetworks.

All the while, Napster has struck a number of partnerships for versions of its subscription service, including for iHeartRadio and Sprint in the past couple of years, and launching “unRadio” with T-Mobile earlier.

Jody McKinley, a former Rhapsody executive and current North America head of Spotify-backed Soundtrack Your Brand, said he sees a number of important distinctions between Napster and Spotify. One is simply Napster’s lack of capital, forcing “a lot of calculated and often conservative moves because they could not afford the luxury of being wrong as much as Spotify,” he said.

But a major difference, he added, is Spotify’s reluctance to do custom development for partners, instead keeping intensely focused on its core product. McKinley said Napster’s partnership approach has been almost the exact opposite. It led to growth, but also may have had an opportunity cost as development resources were applied to partner projects. And, importantly, McKinley said, “In nearly every significant partner relationship, Rhapsody does not own the customer … the partner does.”

I reached out several times to get Napster’s perspective on its current subscriber base, market position and future plans. But although Napster and Bill Patrizio, its new president and CEO, acknowledged the requests, nothing came of it.

Many of Napster’s continuing challenges may simply come down to the seemingly unforgiving nature of the streaming music market.

“Differentiation has always been difficult … in streaming music, all the main services have access to broadly the same range of unlimited content,” said Futuresource’s Sidebottom. “From a features point of view, they are working with also a similar toolbox; if one does it, it’s often replicated.”

Margins, too, are tight due to royalty payments. “Consider this: Spotify has lost $3 billion since inception; they’ve leveraged it to the hilt to achieve the sort of scale they needed,” said Paul Resnikoff, whose Digital Music News has covered streaming music services for years. “It’s a spender’s game — and now, it’s all conglomerating around the big elephants: Apple, Amazon, Google + YouTube, and maybe Spotify can survive in that.”

It may be that the future belongs not to pure-play streaming businesses, like a Napster or even a Spotify, but to those which are part of a business that can leverage the losses to draw listeners to more profitable products.

Some services haven’t survived. For example, Microsoft’s Zune Music Pass and its successor Groove Music are corpses. “Established services such as Deezer and Google Play Music have struggled to break out despite initial encouragement,” Sidebottom said. Pandora, a once high-flying streaming service that went public in 2011 and rivals Napster in age, also remains unprofitable.

In this tough market, even those who are “successful” perhaps aren’t really succeeding, financially. It may be that the future belongs not to pure-play streaming businesses, like a Napster or even a Spotify, but to those which are part of a business that can leverage the losses to draw listeners to more profitable products, such as Amazon or Apple.

“Spotify is unusual in that it isn’t part of a larger corporation selling other products and services – its rise has been (due) to its independence, brand kudos and a strong user interface,” said Sidebottom. “These have in turn led to strong uptake often from word-of-mouth. Its comprehensive free tier has also been key to attracting and upselling users.”

Spotify charges $10/month for its Premium subscription after a 30-day free trial, similar to Napster’s Premier level. But unlike Napster, Spotify has an ad-supported free subscription level.

Whether its word-of-mouth and free tier will be enough to ensure Spotify’s long-term survival is an unknown. “This is really a brutal business, if you even want to assume it’s a business in the end,” Resnikoff said. “I think Napster/Rhapsody took a far more conservative approach, but there isn’t much room for that, I’m afraid.”

In the meantime, subscribers (such as me) are largely unaware and probably uninterested in the financial drama, as long as the music streams keep flowing.

Considering the losses and business model challenges, should Napster or any competitor really want to be the next Spotify? This may be a case of be careful what you wish for.