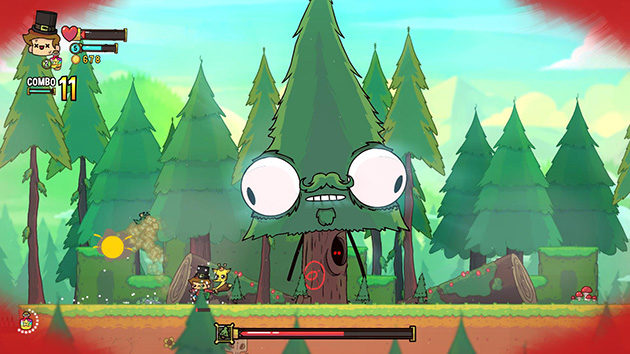 I wasn’t expecting The Adventure Pals to be this easy.

It’s an independently-made game that draws a lot of its inspiration from the platformers of the 1980s and ’90s, and usually, when a game fits that description, it’s also going to be throw-your-monitor-out-the-window hard. A lot of those old games used a high difficulty curve to extend their running times, which in turn justified their price tags, and we played them anyway because it wasn’t like we were going to go outside. Now, some of the people who grew up on that kind of thing have become software developers, and the games they make are just as challenging, if not more so. Recent examples include Cuphead, Celeste, or Super Meat Boy: games made by masochists, for masochists.

The Adventure Pals, on the other hand, just seems to be happy you’re playing it. It’s a bright, cheerful cartoon of a game, which feels like it was made as a stealth pilot for the creators’ new show on Adult Swim, and compared to almost everything else in its genre-pool, it’s a walk in the park.

Made in Unity by a team spread out between Sydney, Vancouver, and the UK, The Adventure Pals begins on its protagonist Wilton’s birthday. In quick succession, his dad gives him a pet giraffe (“I’m gonna name her Sparkles!”); his archenemy Mr. B abducts his dad; and his mom sends Wilton out to explore five dangerous nearby areas, in search of the five rubies that Mr. B will take as Wilton’s dad’s ransom. As Wilton, you’re armed with a pet rock, a wooden sword, and your giraffe’s wide variety of possible uses; she’s not only a trusty mount, but a makeshift wrench, a grappling hook, and can slow your fall by whirling her tongue like a helicopter blade.

The first five rubies are only the beginning. Adventure Pals plays out like its own legacy collection, with every island full of levels as its own entry in a long-running series, with each stage gradually introducing more obstacles, mechanics, and monsters to deal with, and deepening what was already an incredibly strange sort of world. If you’re a veteran of this sort of game, none of it will surprise you; a given level is an assortment of whirling blades, moving platforms, spike traps, switches, hidden treasures, explosive enemies, and sudden ambushes, all of which is just challenging enough to keep you involved without ever tipping over the edge into being boring. It feels like I’ve been training to play this game all my life and this is some sort of final exam.

If it reminds me of anything in particular, it’s the original Kirby’s Adventure, which isn’t a comparison I make lightly. Adventure Pals isn’t a game where basic survival is a real problem, but finding all its secrets and achieving 100% completion will take you a while. It’s made to be explored, rather than overcome.

The hit detection’s a little wonky, particularly when you try to defeat an enemy by landing on its head, but Adventure Pals’s one real problem is its lack of difficulty. It’s certainly fun, but if you have any experience with this genre, it’s not challenging enough to be more than a temporary distraction. It plays well, with great animations and smooth controls, and it’s often genuinely funny (although a lot of the jokes might fly over your head if you don’t know the genre), but if you’re used to more challenging games than this, you can win Adventure Pals just by putting in the time to do so. 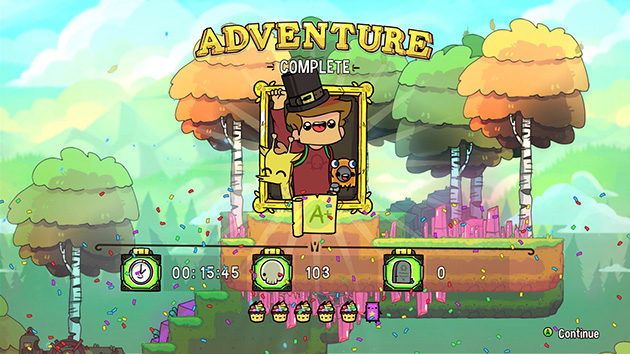 That said, if you haven’t spent the bulk of your life on acquiring these skills, Adventure Pals is a perfect entry-level game. It takes some effort to die, there’s not much of a penalty when you do, it is almost always genuinely your fault when you do (barring the occasional ambush where the game just drops five enemies at once on your head), and it drip-feeds mechanics and new features at you at a steady, slow rate. It’s a good game for children, although the humor occasionally gets dark or weird enough that a younger kid would end up confused or asking you some uncomfortable questions. (For example, there’s an early quest that ends on a pretty twisted bestiality joke. Have fun explaining that to a seven-year-old.)

Adventure Pals also features a genuinely great local co-op mode, where the second player takes the role of an unexplained and largely ignored second Wilton, complete with his own pet giraffe. If you’re looking for a good two-player cooperative game for a weekend, especially one that isn’t dark or gory, you can’t do much better than this, especially for a $15 digital download. I could see having a lot of fun with this with a friend who’s new to video games, or with a kid, especially if that kid loves cartoons.

I do like that this isn’t aimed at experienced players, though. The platform games I grew up on were only “entry-level” in the sense that there wasn’t anything else to play, and it’s good to have a few games out there that are designed to be fun without also being kick-your-teeth-in difficult. The Adventure Pals is too easy for me, although I enjoyed the time I spent with it, but I’ll keep it installed so I have a good kid-friendly game around for company.

This game was reviewed using a Steam code supplied by Massive Monsters.