After seven years of preparation, two research vessels are heading out of Seattle to begin a 40-day voyage to track how tiny organisms in the ocean affect the world’s carbon balance — and it’s a bittersweet moment for one scientist who’s staying behind.

“People ask me, ‘Are you happy?’ ” Paula Bontempi, EXPORTS program scientist at NASA Headquarters, said today at Seattle’s Pier 91, hours before departure. “I don’t know. Are you happy when your kids go off to college?”

It’s graduation time for the EXPORTS oceanographic campaign, jointly funded by NASA and the National Science Foundation. EXPORTS stands for Export Processes in the Ocean from Remote Sensing, but the mission is really about two subjects that aren’t in the acronym: carbon and climate.

The principal focus of the sea survey is a class of near-microscopic plantlike creatures known as phytoplankton, and the slightly bigger creatures that eat them.

Phytoplankton play a key role in removing carbon dioxide from the atmosphere through photosynthesis, and they represent the first link in the oceans’ food chain.

The scores of scientists participating in the EXPORTS campaign plan to measure the abundance of phytoplankton and find out what happens to the carbon from the creatures once they’re consumed, down to “Twilight Zone” depths of more than 3,000 feet (1,000 meters).

But that’s not all: The measurements made from the ships will be matched up with multispectral satellite observations to improve the models for tracking the signature of organic carbon from space.

EXPORTS science lead David Siegel, a professor of marine scientist at the University of California at Santa Barbara, said such correlations between satellite data and ocean measurements have been done before, but not the way they’ll be done in the weeks ahead.

“This is special, because we’re doing everything at the same time,” he said during a NASA Social meet-up at the University of Washington.

Werdell said PACE is designed to do a 24/7 survey tracing the ebb and flow of different ocean species, based on changes in ocean color. But in order to do that, PACE’s scientists will need the kind of correlations that the EXPORTS campaign is expected to discover.

“Satellites are only as good as the field data you use to train them,” Werdell said. 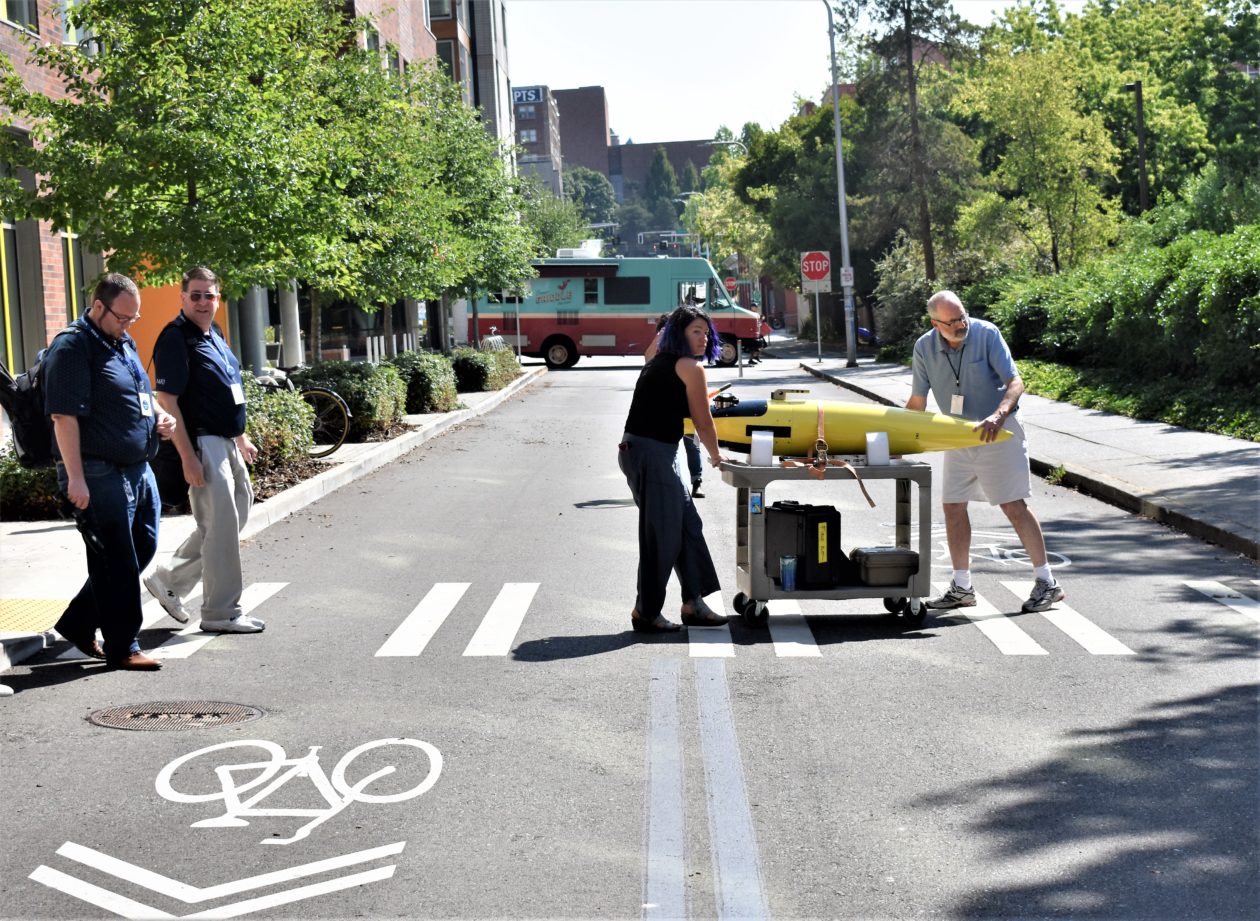 In an echo of the Beatles’ “Abbey Road” album cover, NASA oceanographer Ivona Cetinic and EXPORTS science lead David Siegel wheel a Skyglider underwater vehicle across a Seattle street to get it ready for a research voyage. (GeekWire Photo / Alan Boyle) 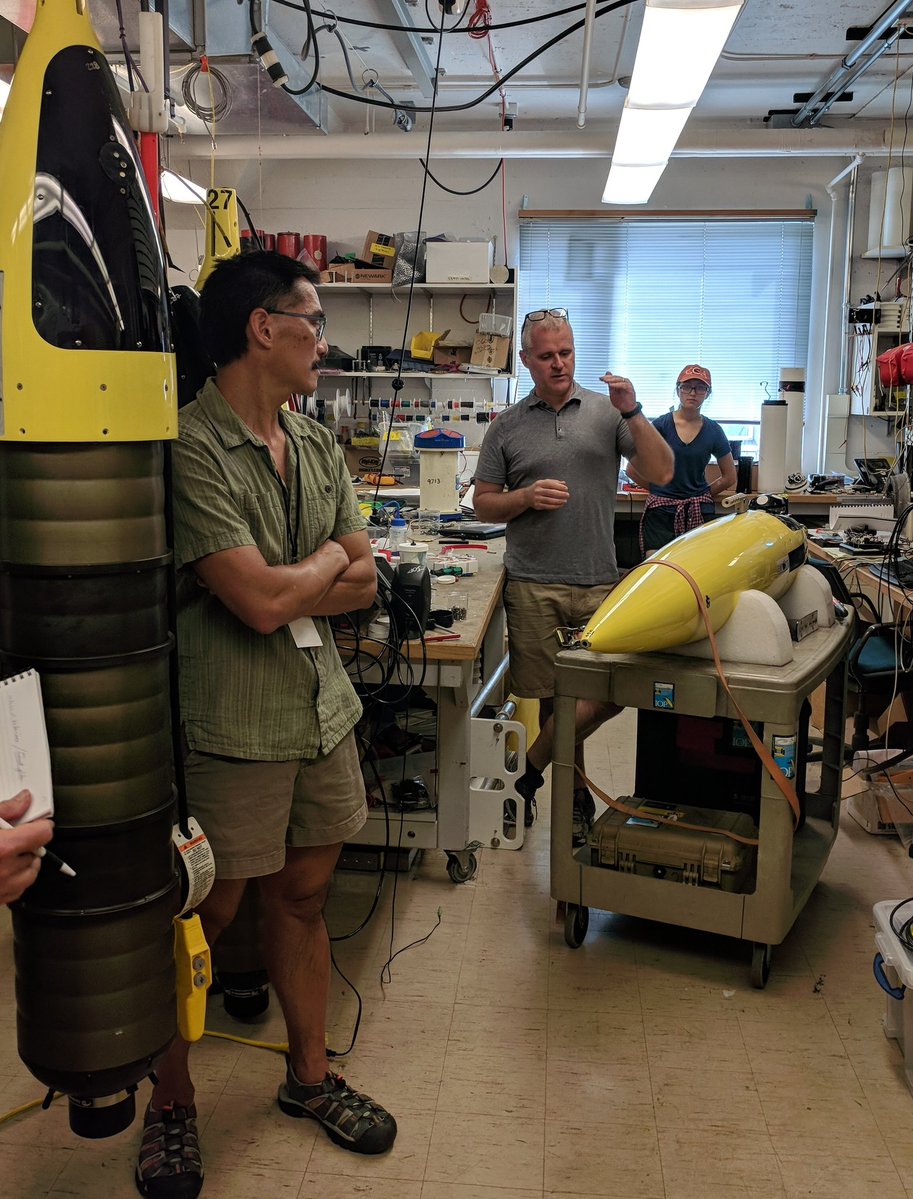 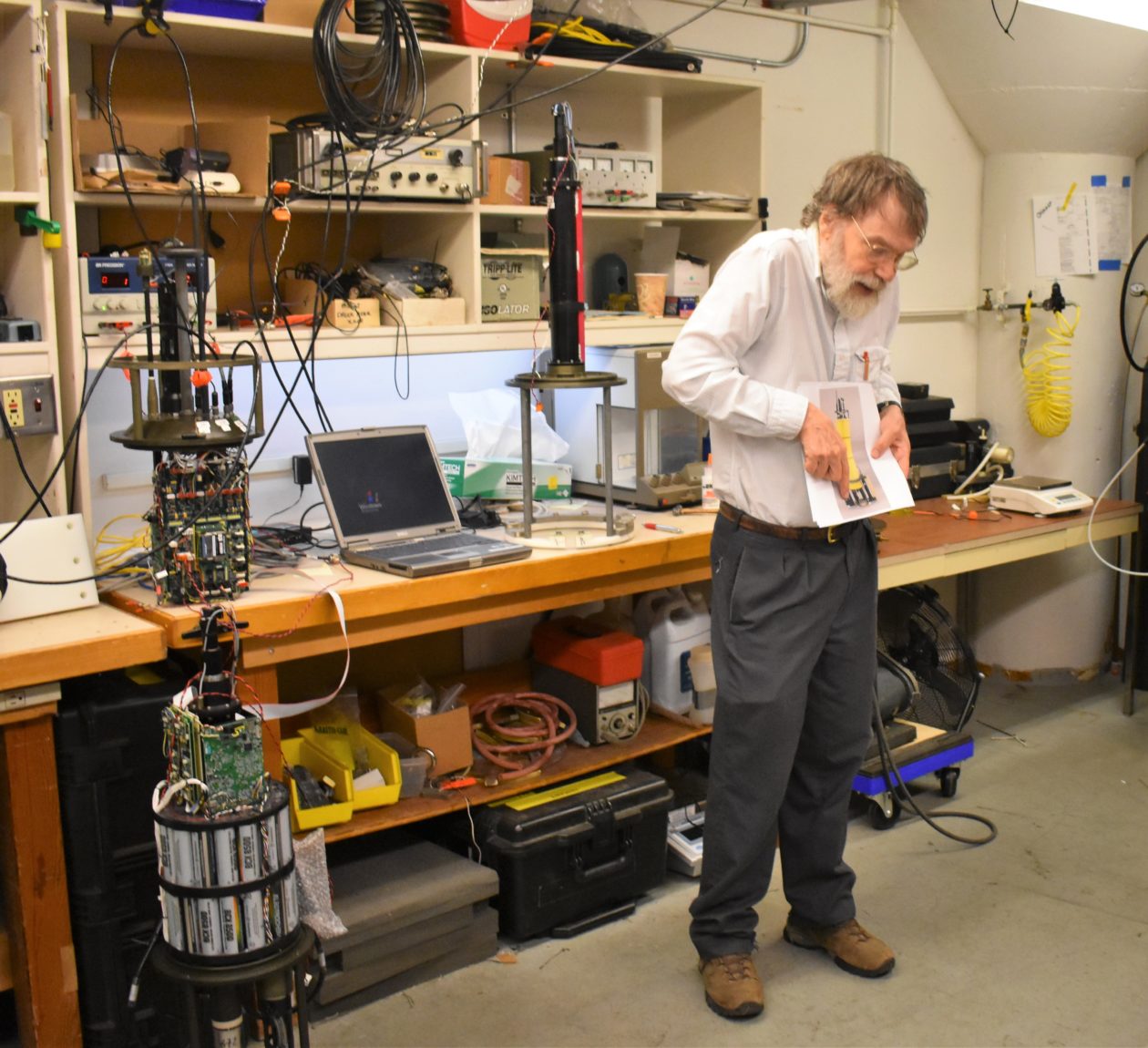 Eric D’Asaro, a senior principal oceanographer at UW’s Applied Physics Laboratory, shows a diagram of the water-measuring floats that will be used during the EXPORTS campaign. Components for floats are on display behind him. (GeekWire Photo / Alan Boyle) 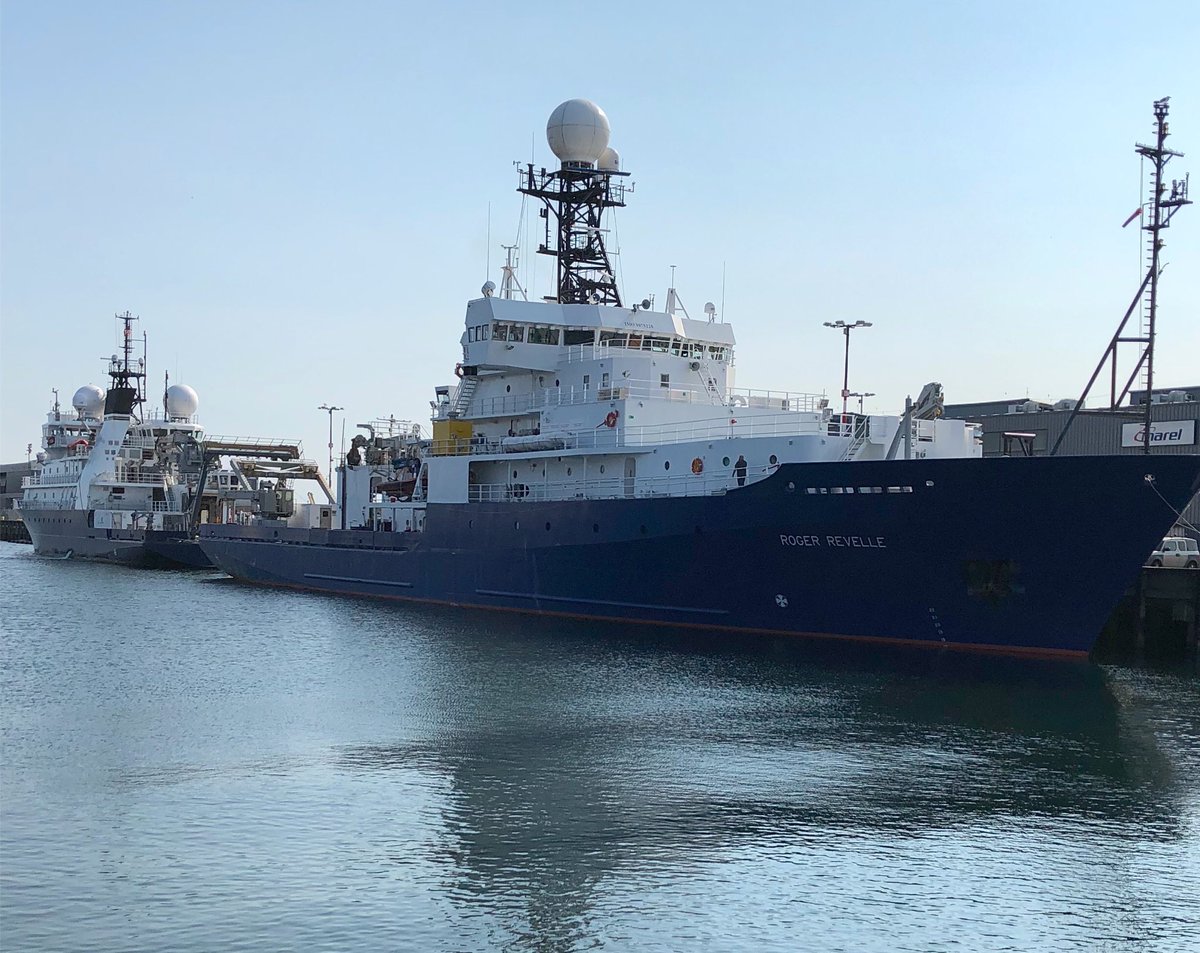 The R/V Roger Revelle (foreground) and the R/V Sally Ride (background) are docked at Pier 91 in preparation for departure. (NASA Photo) 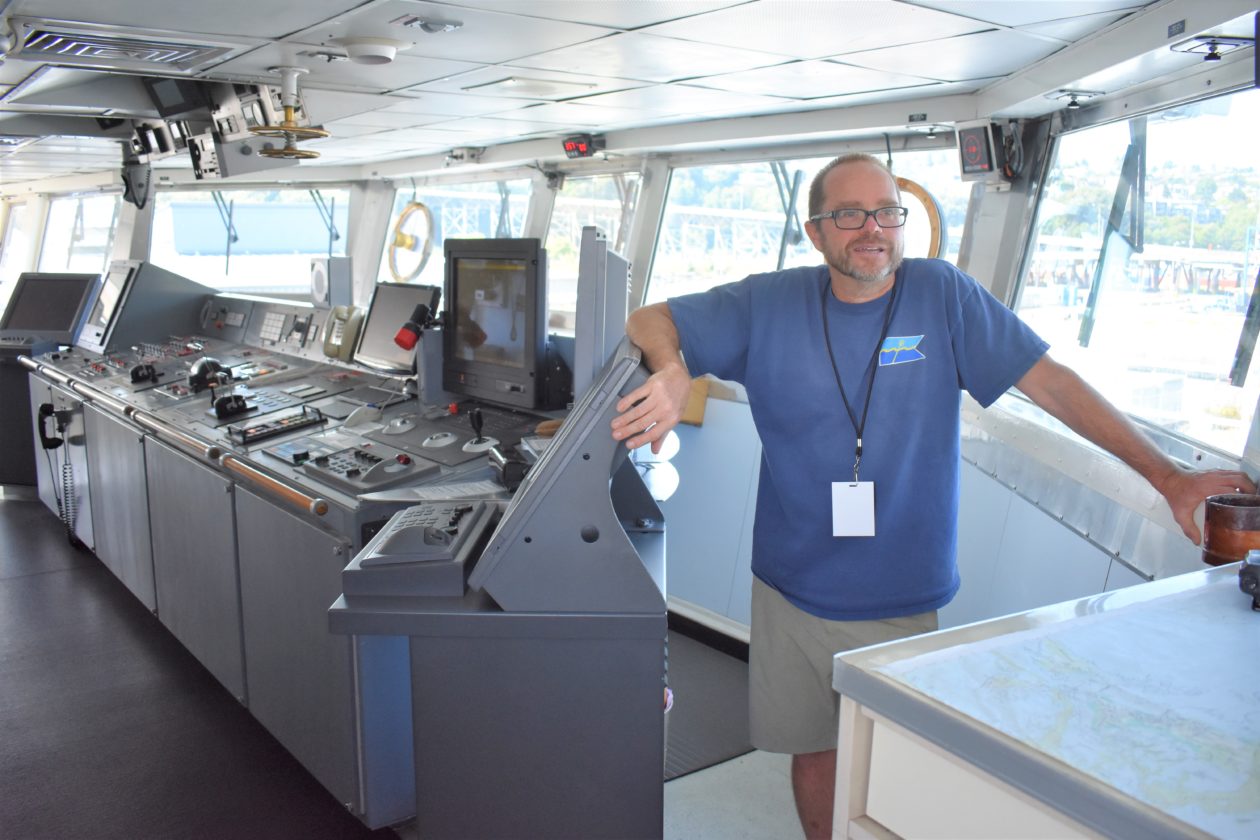 Captain Wes Hill stands on the bridge of the R/V Roger Revelle, which is operated by the Scripps Institution of Oceanography. “I’ve been with Scripps for almost 30 years,” he says. (GeekWire Photo / Alan Boyle) 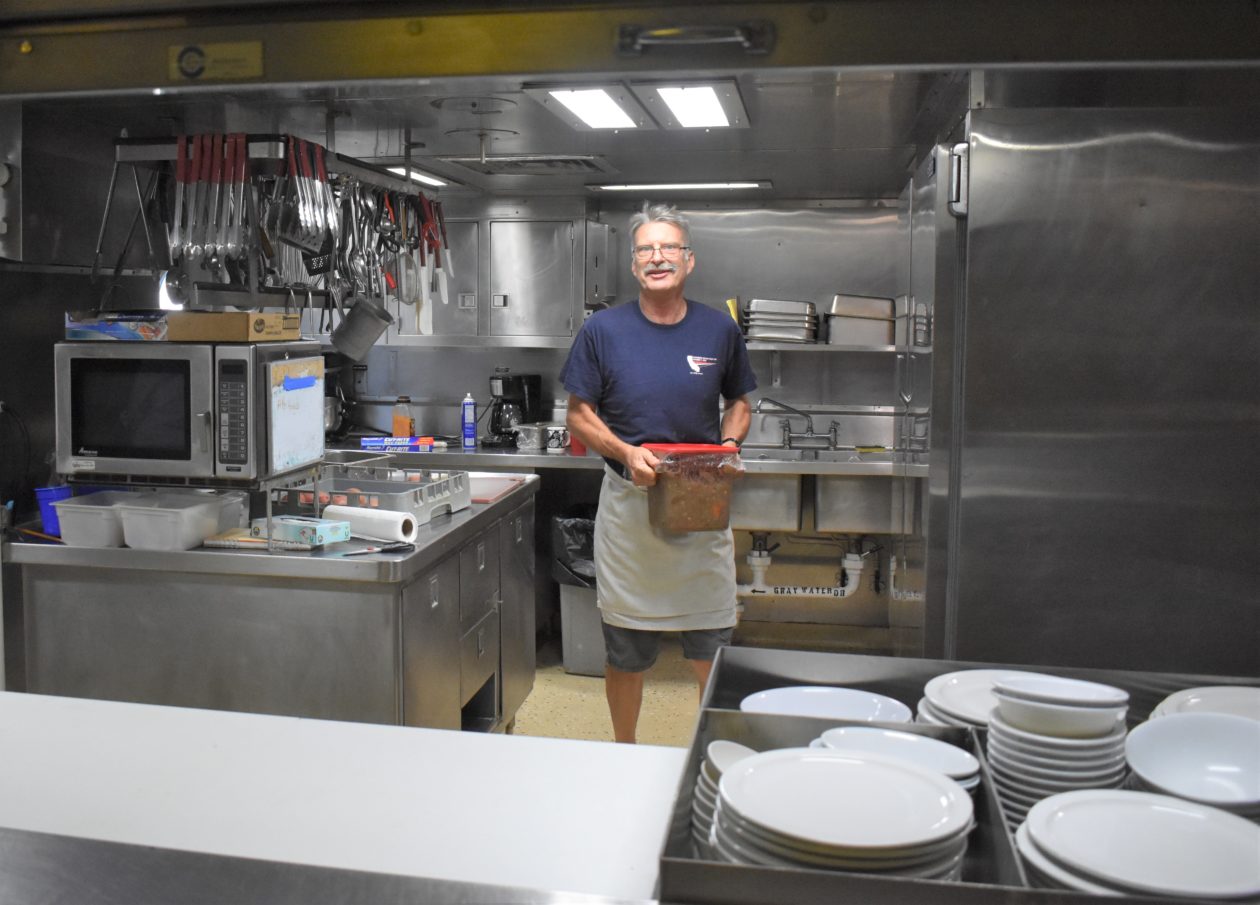 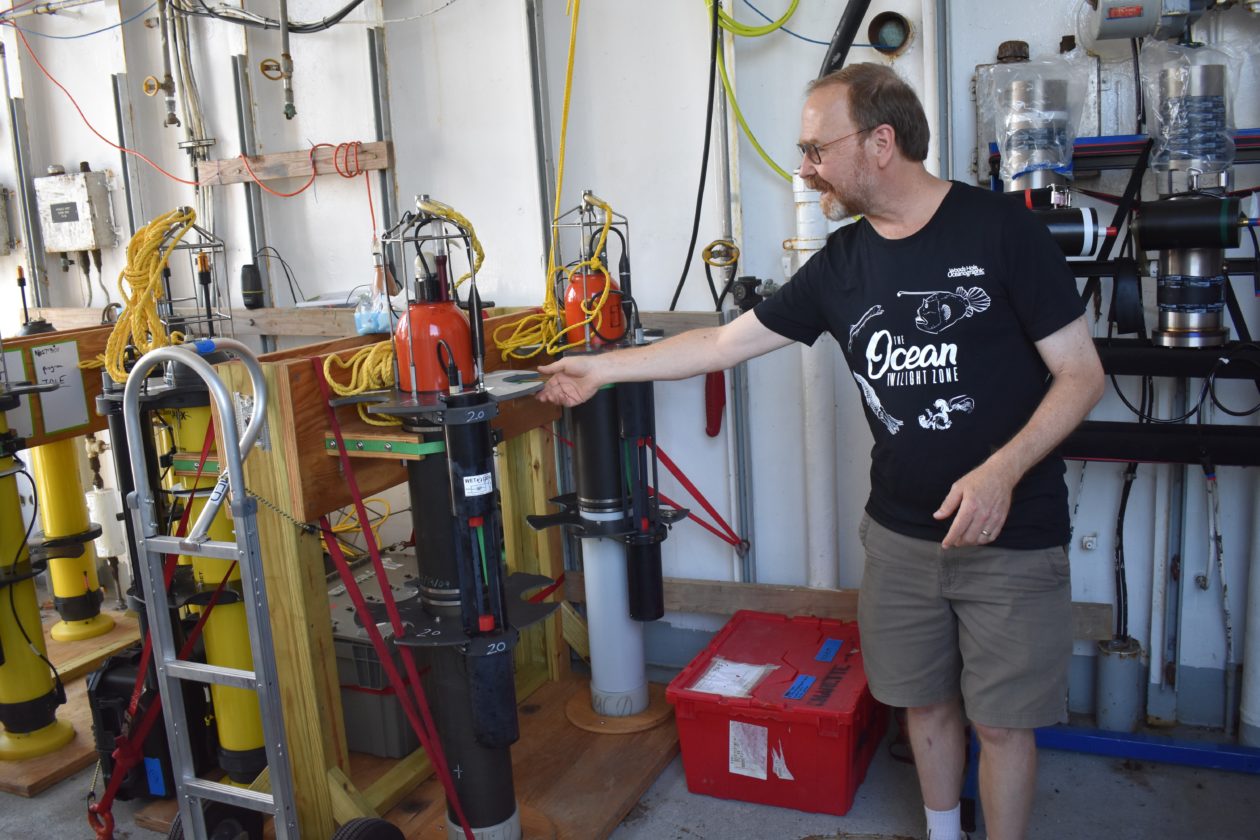 Ken Buesseler, senior scientist at the Woods Hole Oceanographic Institution, says each of the sediment traps that will be used during the EXPORTS campaign costs $70,000. (GeekWire Photo / Alan Boyle) 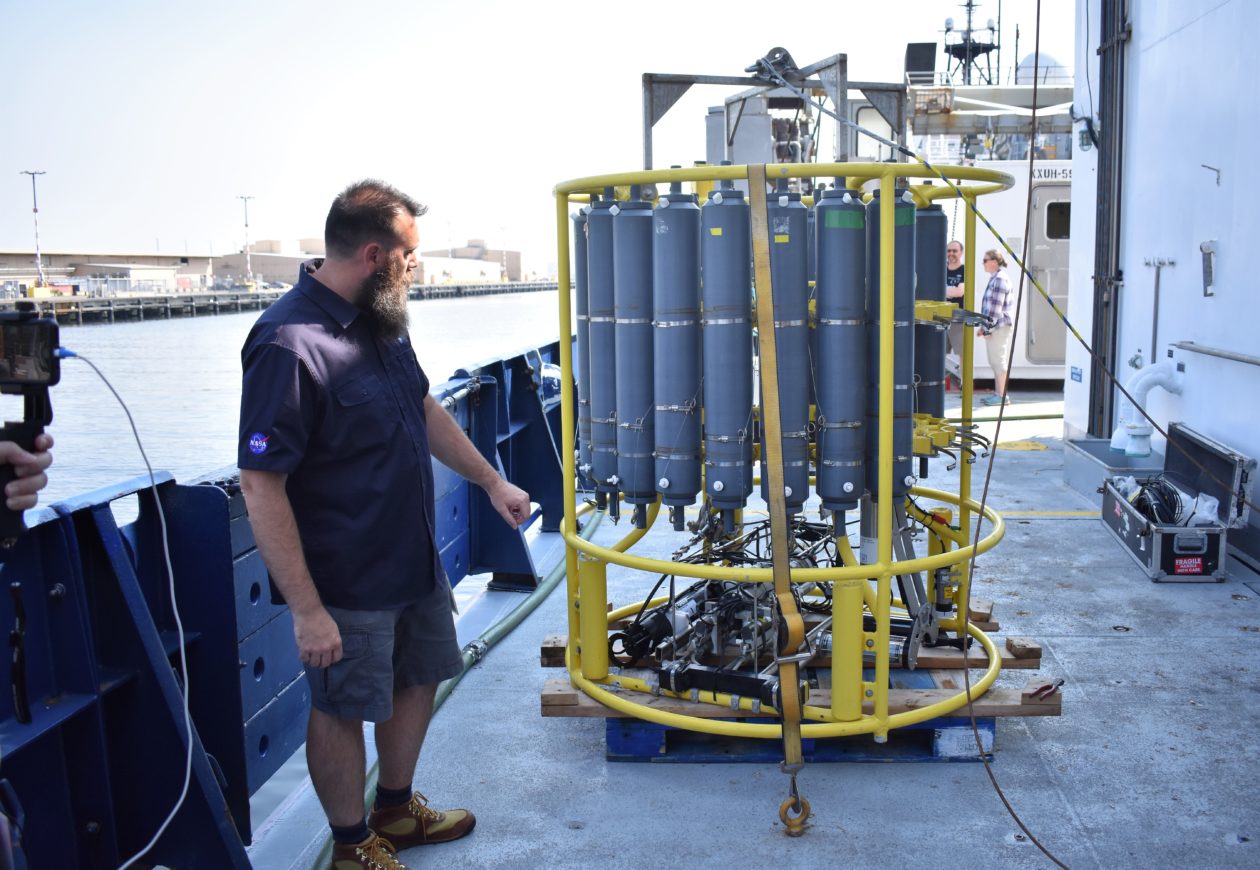 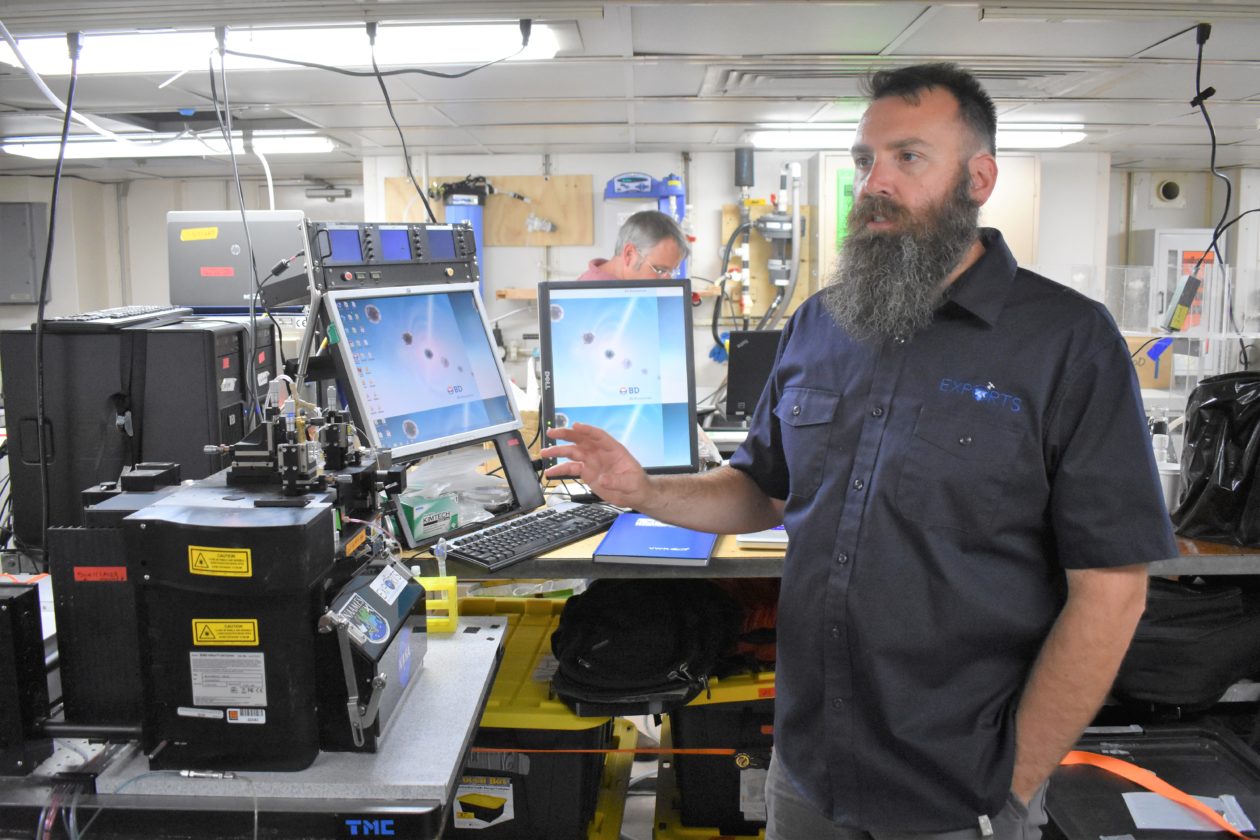 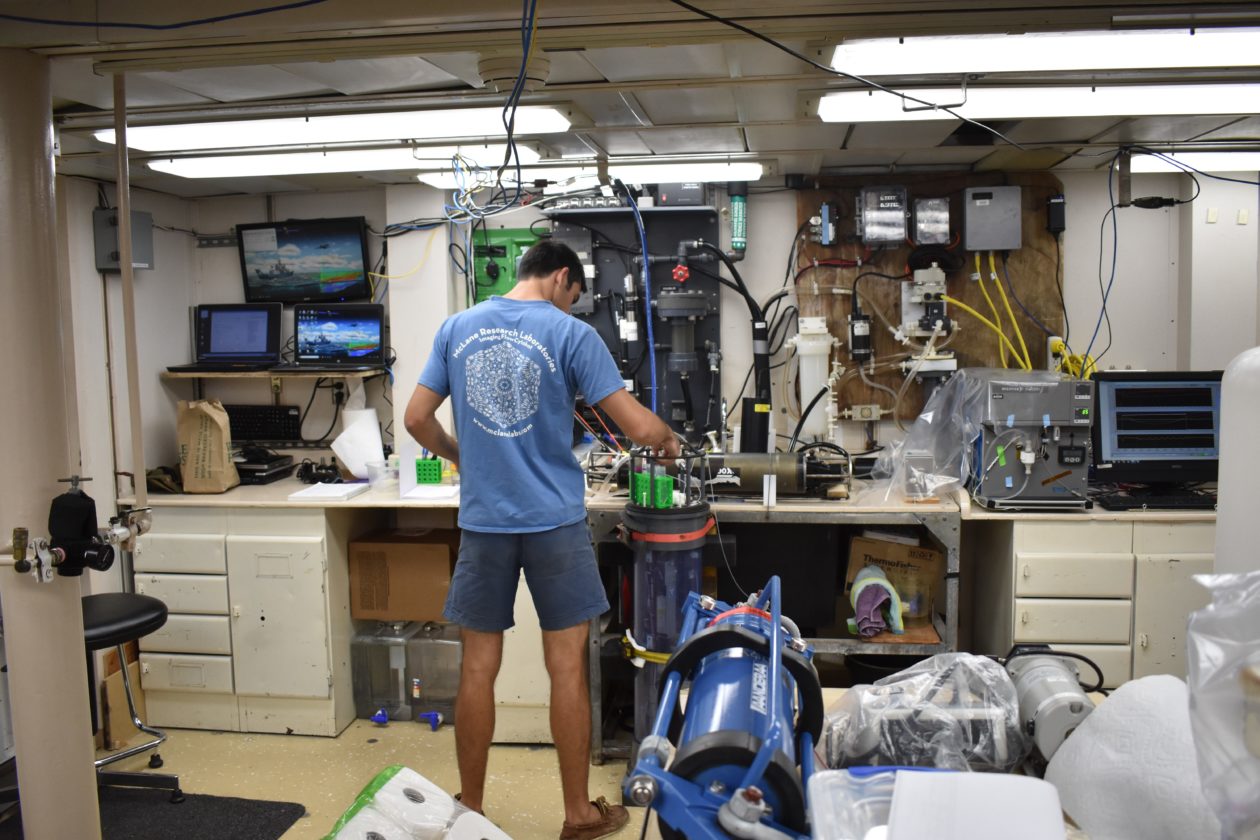 University of Maine oceanographer Nils Haentjens works on equipment that will document ocean color, which is key for correlating data recorded at sea with satellite observations. (GeekWire Photo / Alan Boyle) 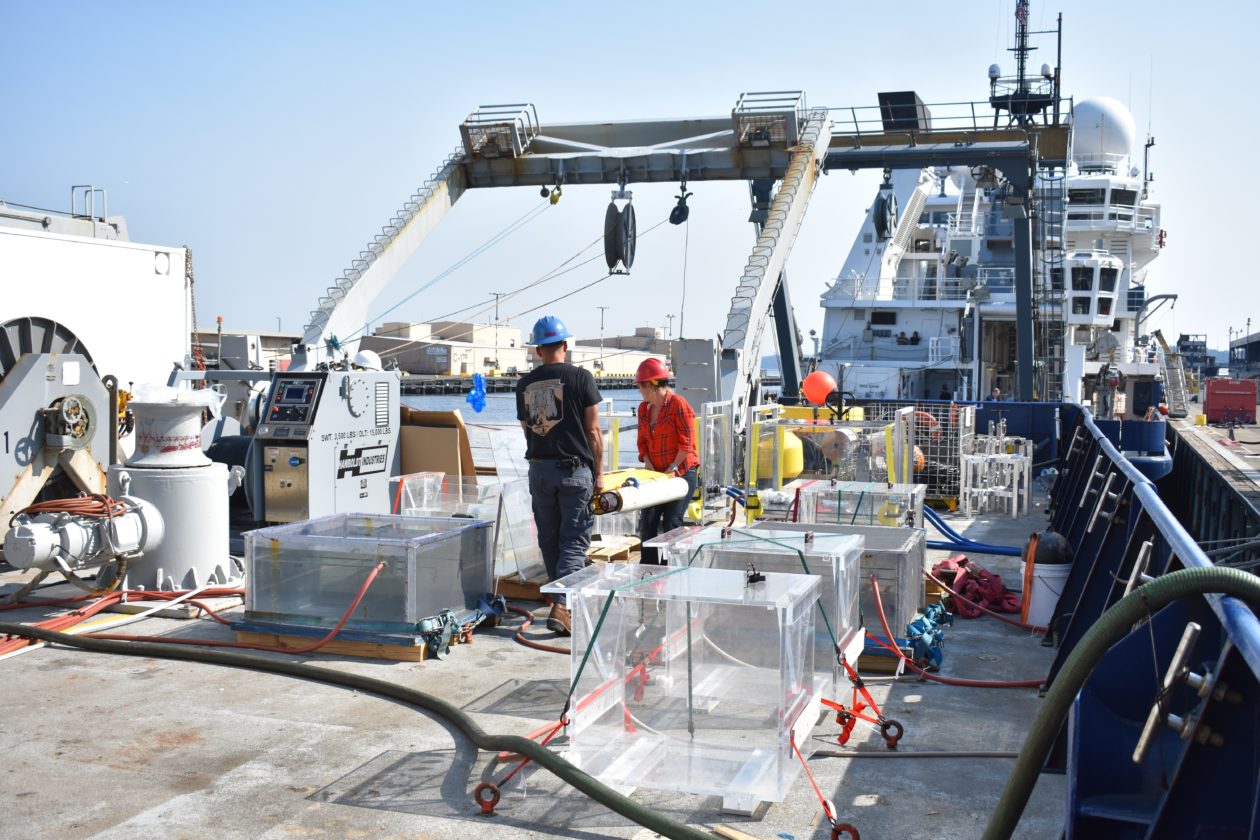 The transparent tanks sitting on the deck of the R/V Roger Revelle will serve as incubators for photoplankton dredged up from the ocean. (GeekWire Photo / Alan Boyle) 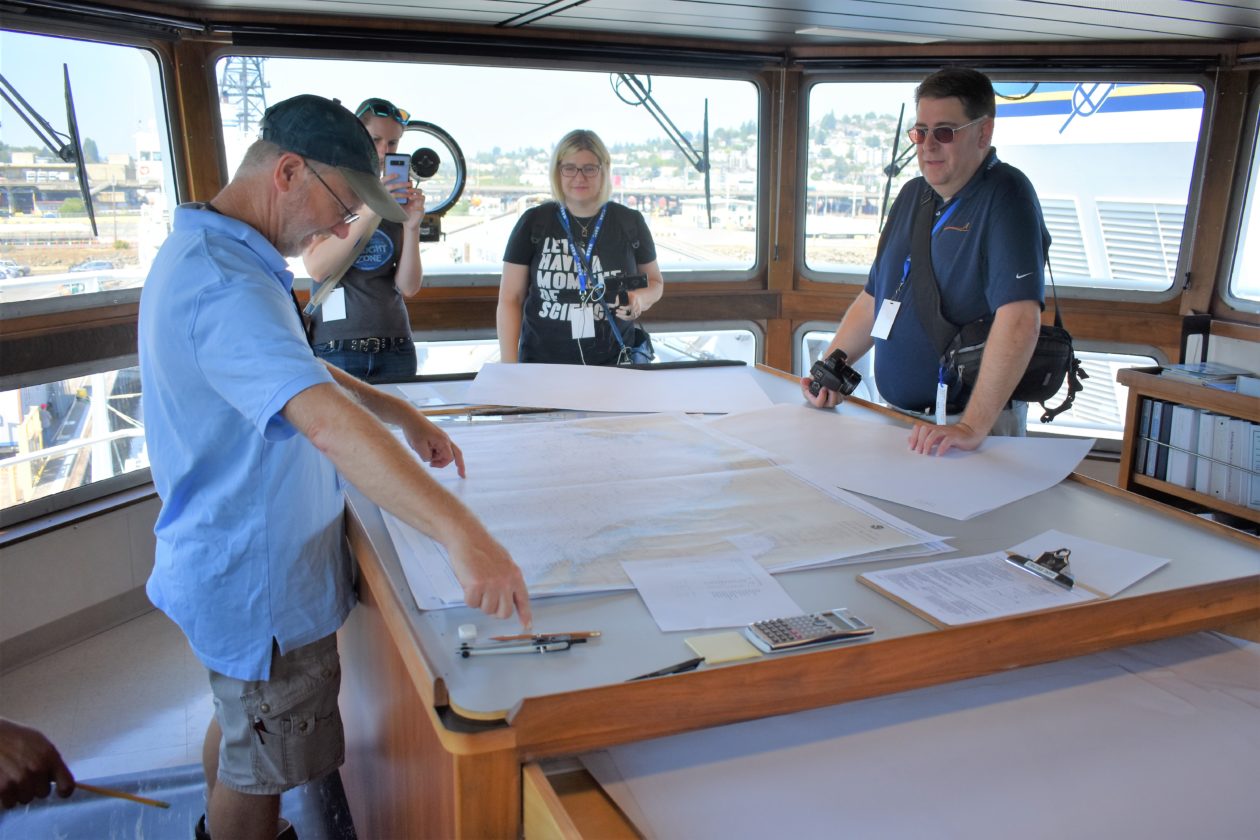 Norm Nelson, an oceanographer at the University of California at Santa Barbara and co-chief scientist on the R/V Sally Ride, points to the ship’s destination on a map with his left hand. His other hand points to where Seattle would be, off the edge of the map. (GeekWire Photo)

EXPORTS’ scientists will be pulling out all the stops to get that field data. Two research vessels, the R/V Sally Ride and the R/V Roger Revelle, will journey to a spot known as Ocean Station Papa, more than 1,000 miles west of Seattle in the North Pacific. (Update for Aug. 10: Both ships have headed out from Seattle.)

Sediment traps and sampling arrays will snag water samples from different depths. Some of the samples will be frozen and stored for later analysis, but others will be studied intensely aboard the ships. Jason Graff, a botanist from Oregon State University who specializes in phytoplankton, will be using a high-tech, high-priced cell sorter to separate out the tiny organisms he’s most interested in studying.

“The joke is that it costs more than a house,” Graff said of the cell sorter. “Well, maybe not in Seattle anymore.”

Meanwhile, underwater vehicles developed at UW’s Applied Physics Laboratory, known as Seagliders, will take readings in the region around Station Papa. The Seagliders, along with a fleet of instrument-laden floats that accompany them, are designed to record data for months. They’ll be on the job long after the scientists return to port in September.

If the campaign turns out as EXPORTS’ scientists hope, the combined ocean observations and satellite observations will provide a baseline by which to judge the future effects of climate change on phytoplankton and the carbon cycle.

“As things get warmer, we know that the ocean ecosystem is going to change,” Siegel said. Can phytoplankton help keep the ecosystem in balance, or will the carbon cycle spin out of control? EXPORTS and follow-up surveys, conducted on the sea and from space, could provide an advance look at the answer.

Keep track of the EXPORTS expedition via the OceanExports.org website and NASA’s Earth Matters blog as well as the @NASAOcean and @NASAEarth Twitter accounts.