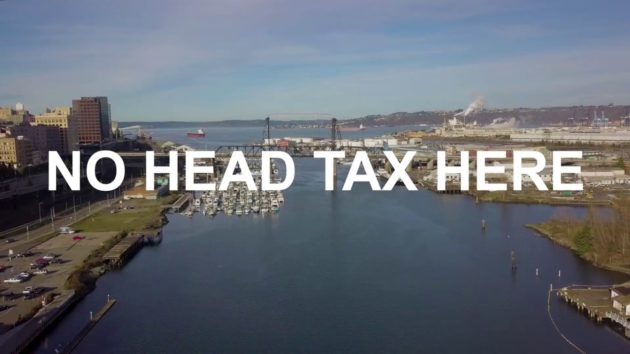 Pierce County on Tuesday plans to introduce a new tax incentive program for employers looking to bring jobs to the county — a direct slap at the City of Seattle which last week introduced a controversial “head tax” on some of its biggest employers.

Pierce County, which includes Tacoma, a port city with a population of just over 200,000 people, plans to offer employers a $275 tax credit per employee —as long as the jobs pay more than $65,000 annually.

The choice of $275 per employee isn’t a coincidence. After all, Seattle approved a plan earlier this month to charge employers with income of $20 million or more $275 per employee, drawing criticism from the business and tech community who say it amounts to a tax on job creation.

Note the value, it's not random. #waleg https://t.co/I5VKIiKwAA

Tacoma — about 35 miles south of Seattle — is using the “head tax” controversy in Seattle to tell its story. And, it hopes to woo some new businesses. More details are expected tomorrow on Pierce County’s new tax incentive program, according to the Tacoma News Tribune.

Business migration patterns have not always worked in Pierce County’s favor, with timber and real estate giant Weyerhaeuser moving its headquarters from Federal Way to downtown Seattle a few years ago. Financial services firm Russell Investments moved from Tacoma to Seattle in 2010.

With the head tax debate raging in Seattle, Tacoma senses an opening. And economic officials in Tacoma and Pierce County released this video last week, appealing to Seattle companies that might want to establish a beachhead just to the south. The unemployment rate in Pierce County stands at 5.8 percent, compared to 3.4 percent in King County (which includes Seattle, Bellevue and Redmond).

The head tax debate has especially roiled CEOs of tech companies — including Amazon, which said the “hostile approach” would force the company to question its growth in Seattle — who feel it penalizes their growth. Manny Medina, the CEO of fast-growing Seattle enterprise software company Outreach, told GeekWire on Monday that the head tax is a “punch in the gut.”

Medina said his company is considering an office in Bellevue, Wash., in response to the head tax.

The tax is expected to generate $45 million to $49 million annually over five years to fund affordable housing construction and homeless services.