In downtown Seattle, the land known as “Amazonia” is dense. And I didn’t know I was walking into it until I was already there.

I’m not from the Seattle area, or even from the Pacific Northwest. I’m a Bay Area native who goes to school in New York, and when I landed here in May as GeekWire’s summer intern, it was my first time in the city. So as an experiment, GeekWire’s editors asked me to take a tour of the Amazon headquarters, taking advantage of my status as a Seattle newbie to assess the tech giant’s presence in its hometown with fresh eyes. 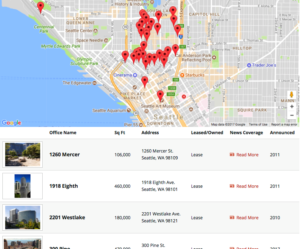 It’s no secret that Amazon has made its imprint on Seattle. The company is the second-largest private employer in the nation, and employs more than 40,000 people in Seattle alone. The Amazon headquarters spans more than 35 buildings in Seattle, from Lake Union to the downtown retail district. There’s a cluster of Amazon buildings both north and south of Denny Park, and the newly-built Spheres are hard to miss.

Amazon said last year that it occupied more than 8 million square feet of office space in Seattle. GeekWire research found that Amazon could eventually expand to as much as 13.5 million square feet across 44 buildings, including occupied property and future commitments. The company’s growth is in question amid the debate over the Seattle head tax, but even now, its scale is enormous.

For Seattle natives, Amazon’s dominance has become an everyday reality. For cities competing for Amazon HQ2, it could be a glimpse of the future. But I didn’t really comprehend it until I joined a guided tour of Amazon HQ — and when I did, it was jolting.

Getting to the starting point of the tour was half the journey. I took the bus, and was dropped off at an intersection where I had no bearings. One thing I noticed, however, was at a certain point the people around me all began carrying the same blue lanyard attached to the same ID cards. Some were carrying Amazon-logoed backpacks. At least I knew I was in the right general area.

Google Maps brought me to the building at 2121 7th Ave. — but to the back of it, not the front. I walked around the block a couple of times before finally eyeing a spot that I thought was the main entrance, and one that I wouldn’t need a badge to enter.

Public spots felt unmarked, and I got lost easily. Where was I allowed to be? Public space bled into private space, and it took me so long to find the right entrance because I wasn’t sure where I could be without getting in trouble.

There were no signs that it was “Amazonia,” nothing that screamed Amazon, except for the Spheres. Despite that, it was inescapably Amazon, in that I understood everyone around had something connecting them together, and I was outside of that. I was in a place that wasn’t meant for me, necessarily.

I checked my phone no less than five times to make sure that I was supposed to be meeting the group in the Day 1 lobby. There was no one who remotely looked like a tour guide or a receptionist desk in what I thought was the lobby. It turned out to be just the ground floor of the building. I glanced around, and hiked up two sets of escalators, which finally brought me into the actual lobby.

Amazon is known as a dog-friendly workplace, and our tour guide let us know that upwards of 6,000 dogs were currently registered and able to come into work with their owners. And that was plenty clear in the Day 1 lobby, where no less than six dogs came and went with their owners in the few minutes I was waiting.

A fun moment of my tour was when a white Samoyed glanced over at me when I passed by the elevator bank. There’s a bowl of dog treats available for the taking at the receptionist’s desk. And there’s a small dog park outside of the building, open for employees and the community.

The Day 1 building, like all other buildings within the Amazon HQ area, has a significant name. In this case, the name references CEO and founder Jeff Bezos’s “Day 1” philosophy. The mantra is repeated in each annual letter, and employees are constantly reminded that it’s “still Day 1.”

And lest you forget it, there’s a handy hint for you in the form of a giant neon sign in the building. It’s still Day 1 at Amazon HQ.

To be honest, I hadn’t known what the Spheres were before I got to Seattle and started to write about Amazon. And if you were to ask me now, I’d still edge on the side of “unsure what Amazon was going for,” but the greenhouse-workspace-cafe is now a recognizable landmark, and another of Amazon’s roots in Seattle.

The Spheres opened in January of this year, only to Amazon employees unless you registered for an Amazon HQ tour. The company announced in April that it was opening the Spheres to the public for two Saturdays a month, based on reservation. 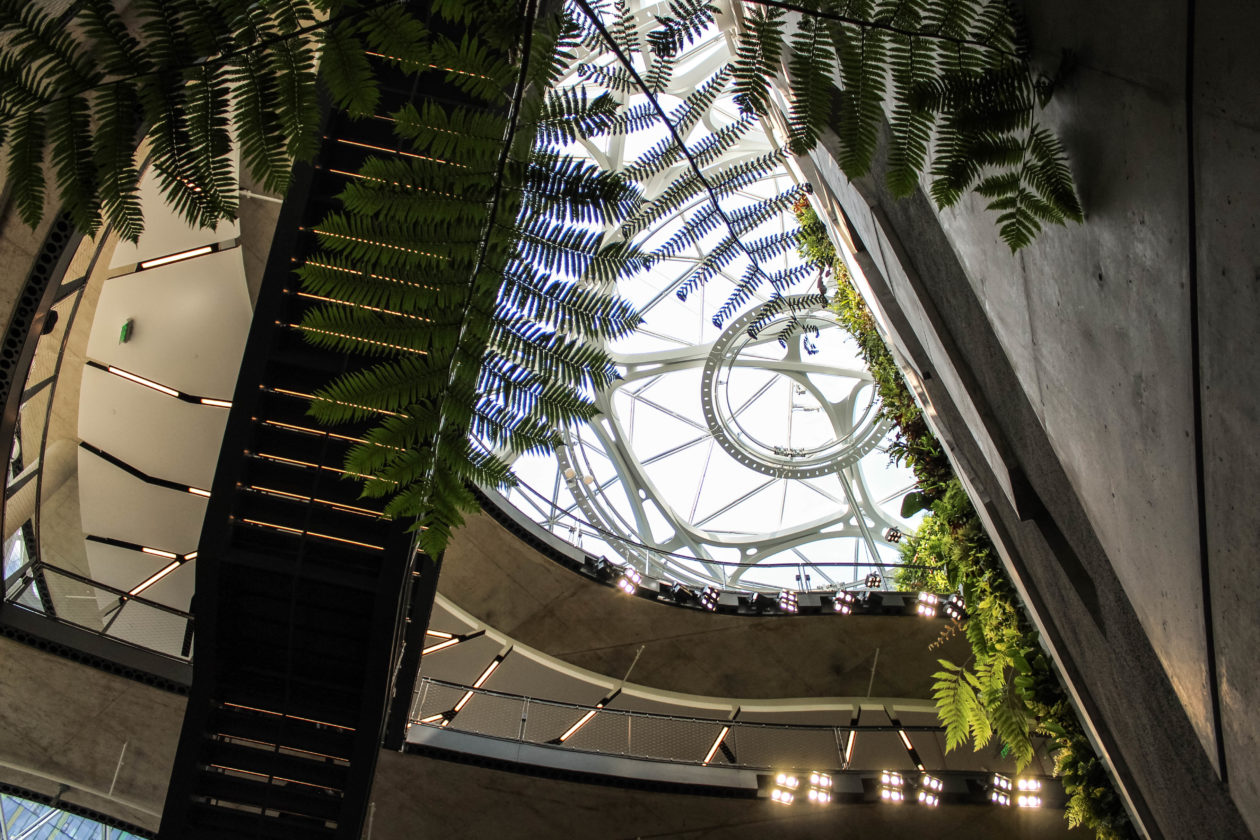 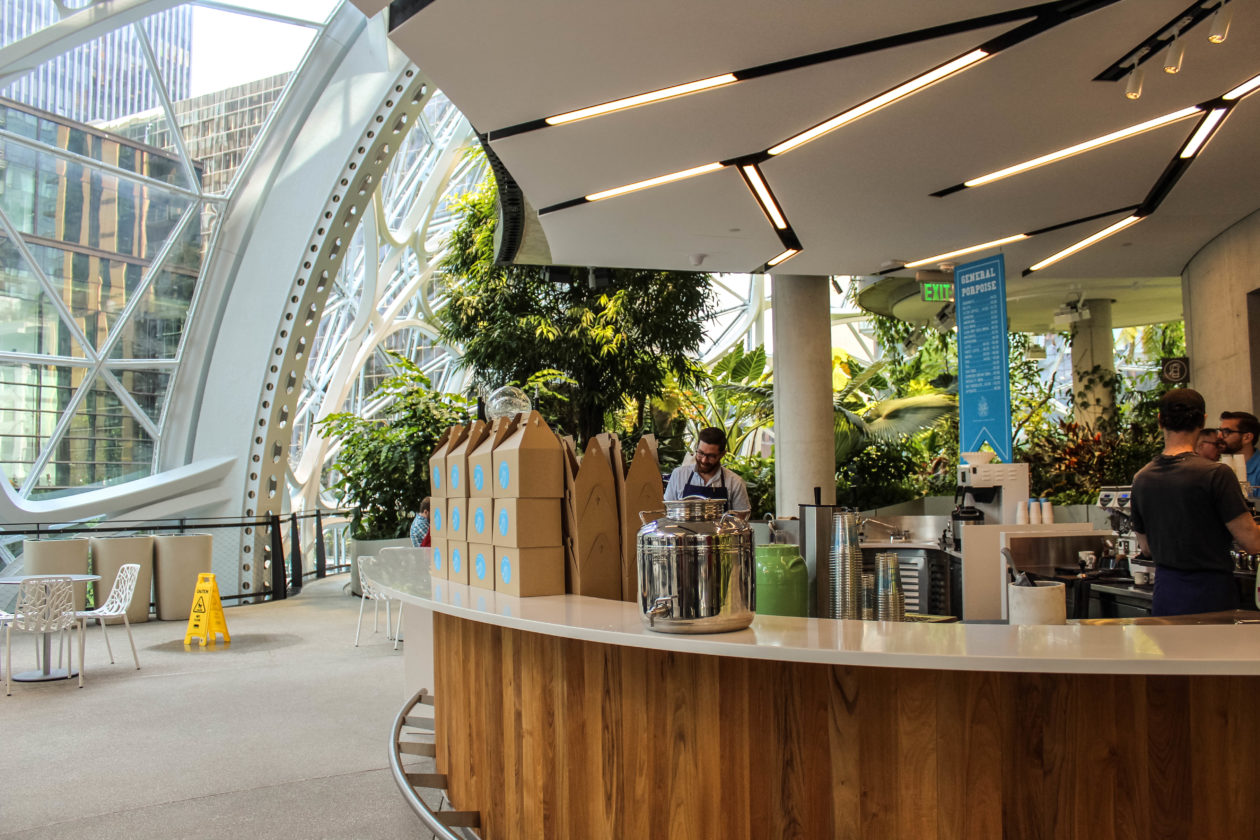 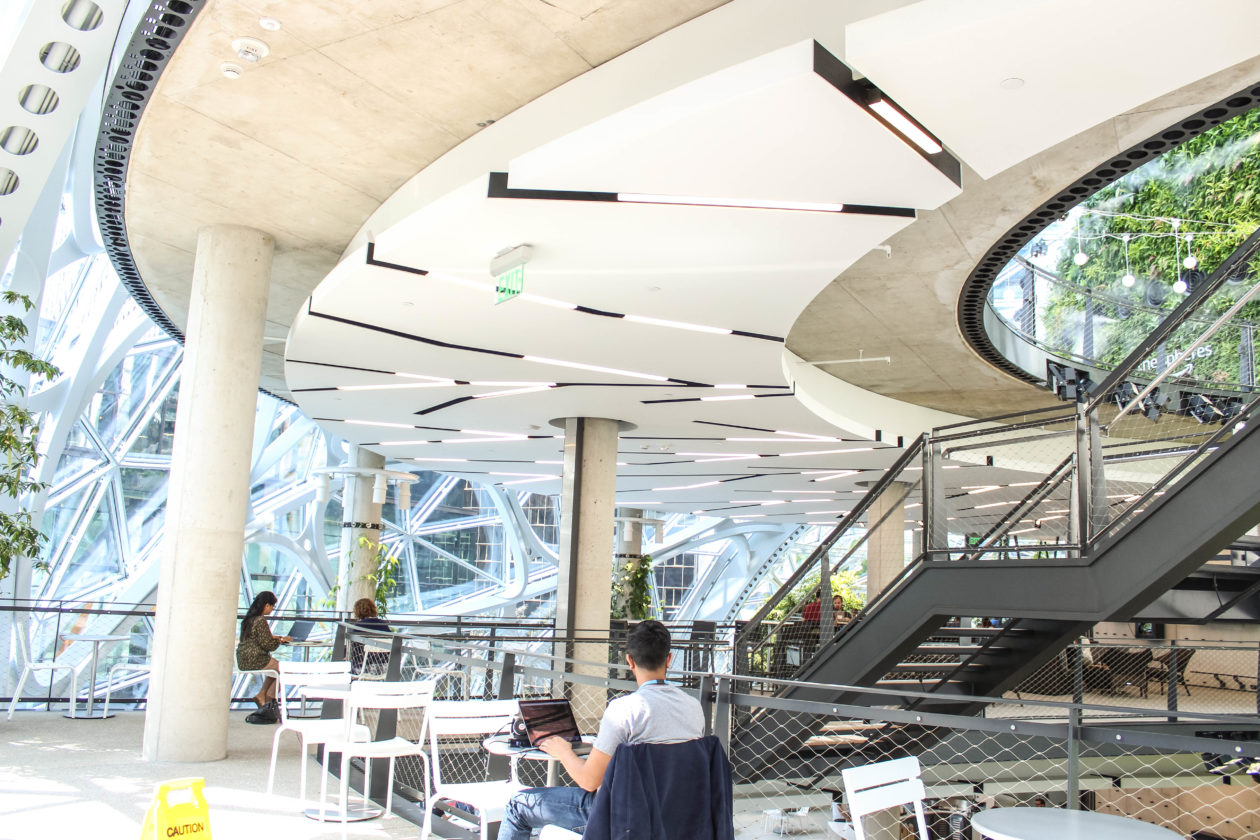 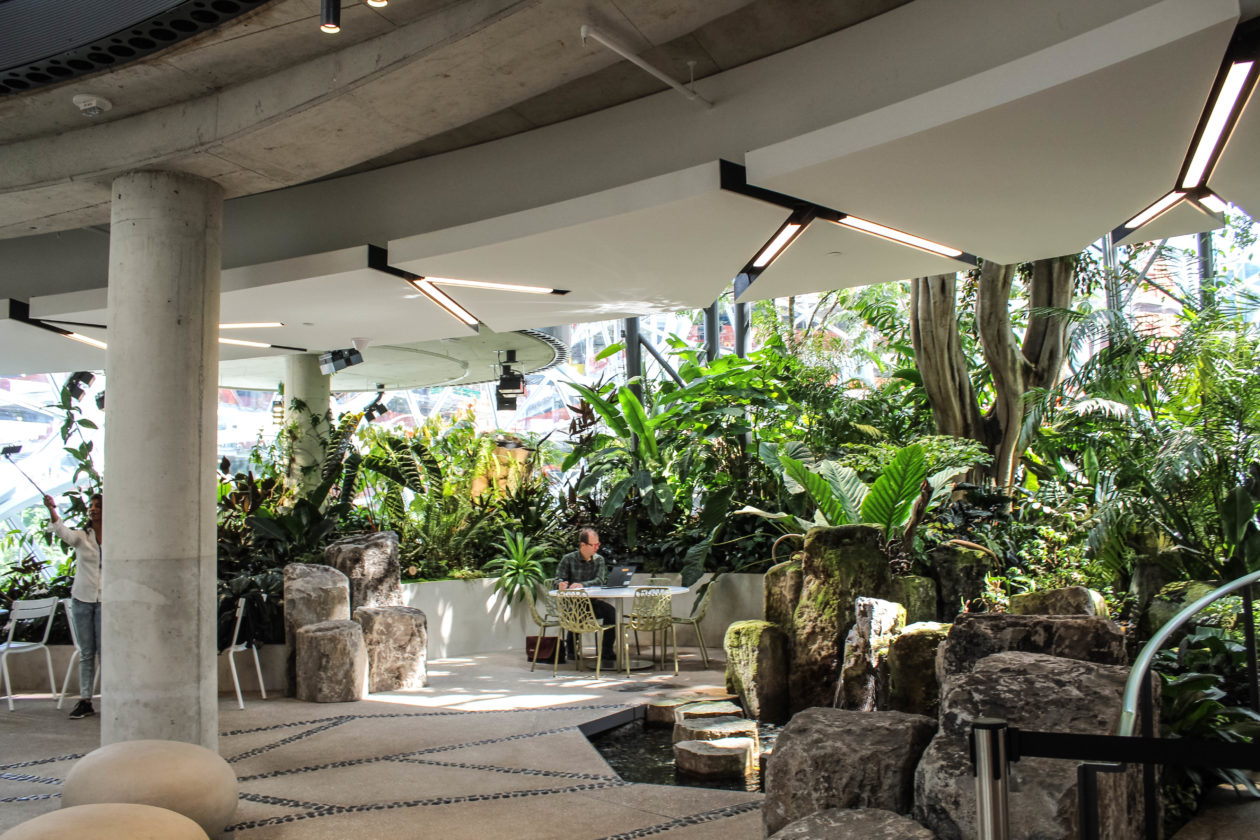 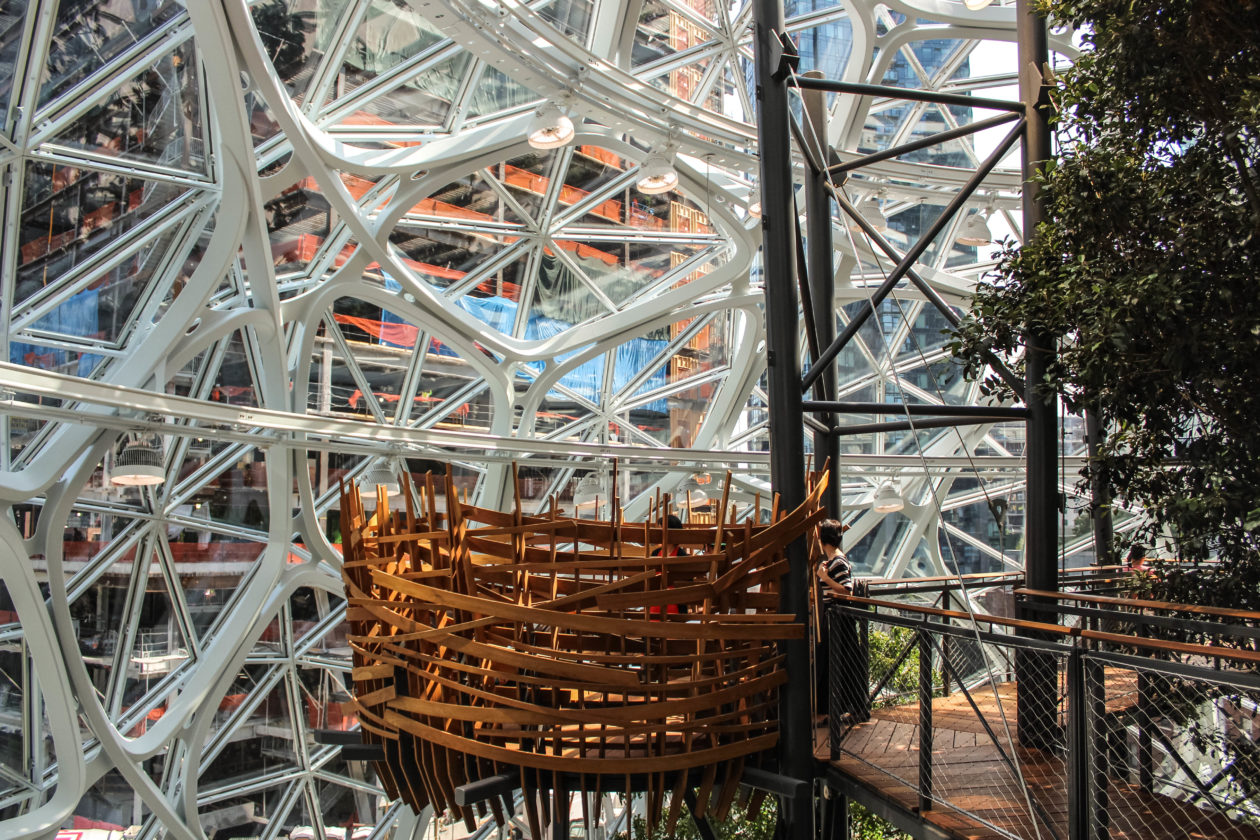 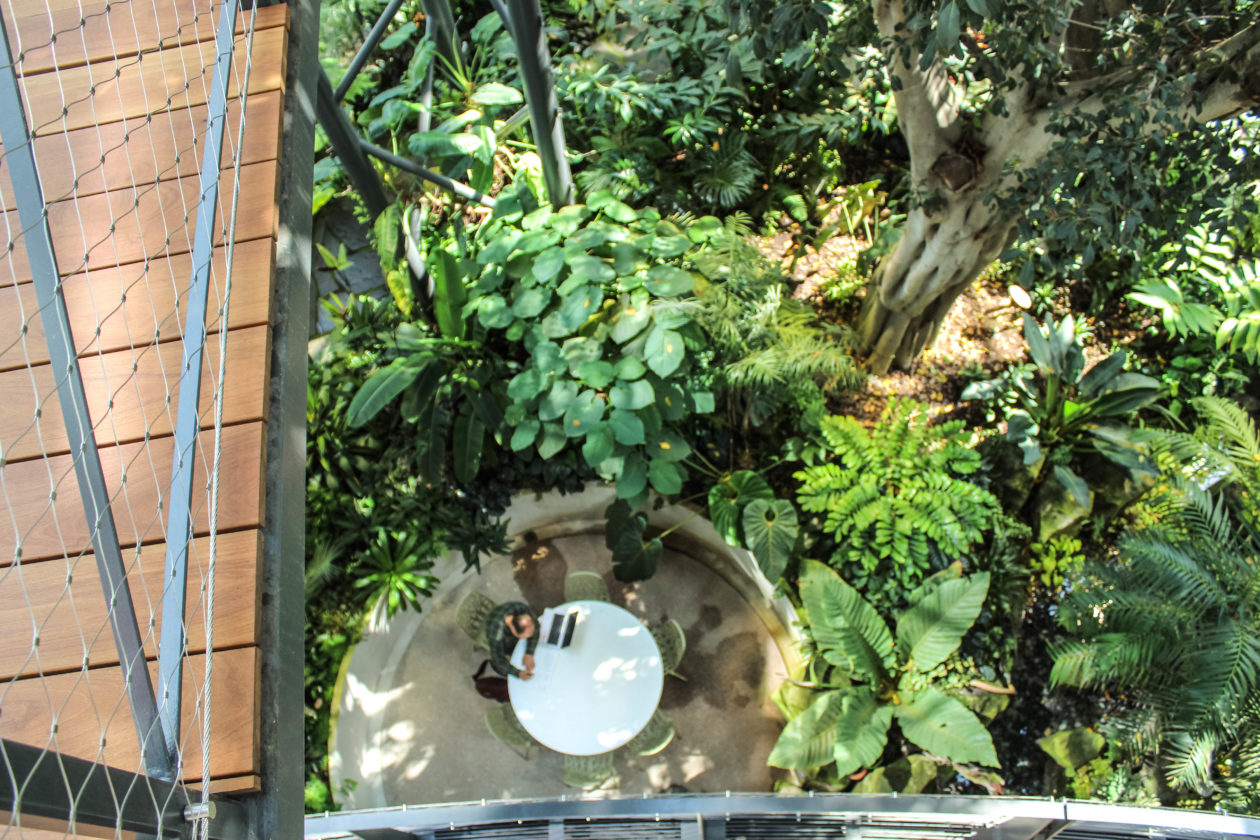 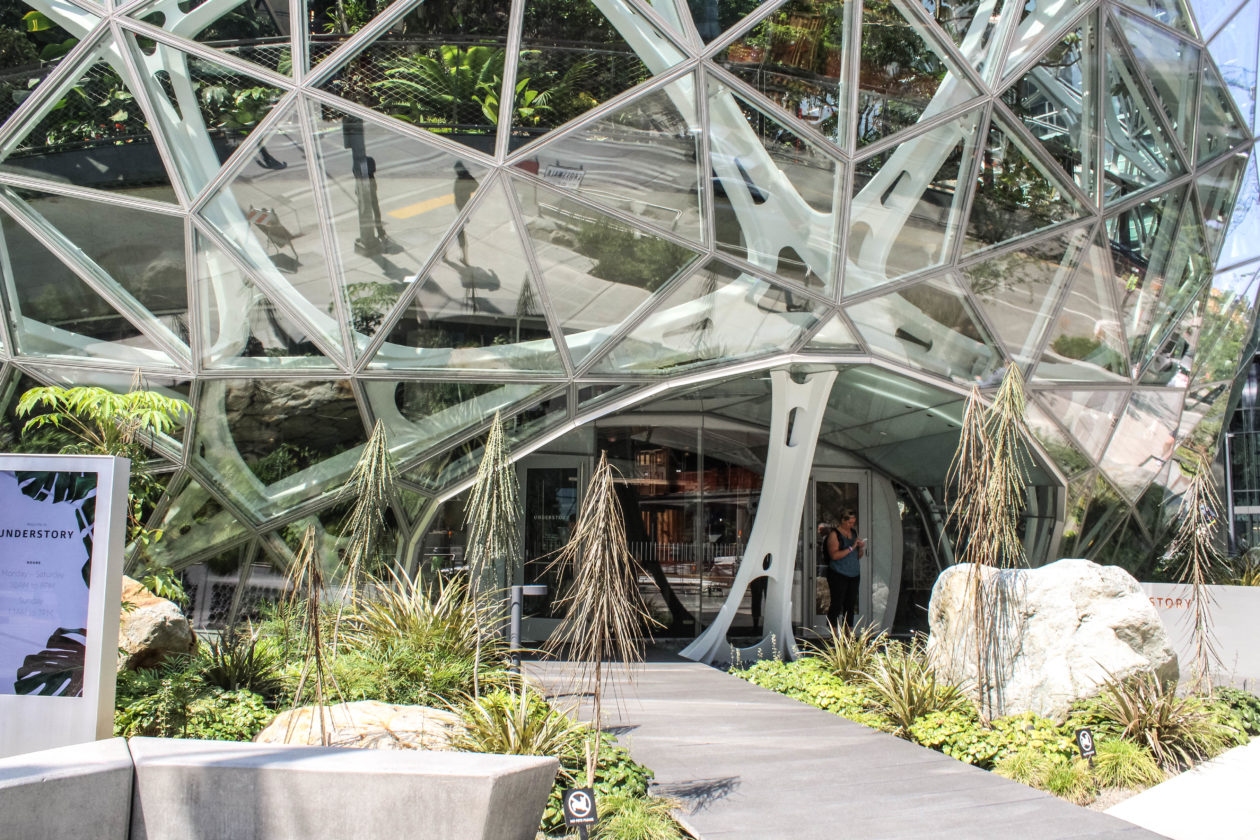 The Spheres are better from the inside than the outside. The light and the greenery are a breath of fresh air in a bustling urban environment.

It matches Seattle’s nature-loving reputation more than any of the towers that Amazon has built. But it was a polished sort of natural — it’s hard to miss the two cafes on two separate floors, nor can you avoid the tables and benches set up for people to work. There seemed to be nothing out of place, which feels like it could be a metaphor.

Amazon’s Doppler building feels much like any other tech office building: the floors with offices are open plan, and include such amenities like kitchens on every floor and foosball tables. Its theme, the tour guide told us, is customer reviews, a vital part of the company’s e-commerce platform. The walls are printed with years upon years worth of Amazon reviews.

The store inside the building is a place for employees to grab a quick bite or something to drink. It’s named for one of the pillars of Amazon’s business, its marketplace, which feels a little too obvious. But it ends up being a representation of what Amazon thinks is important.

The last thing I wanted to check out came after the tour was done. The Amazon Go store, on the ground level of the Day 1 building, promises a fuss-free, automated shopping experience. Simply download the Amazon Go app and connect it with your Amazon account, scan your unique QR code and do your shopping, then leave the store without going through a checkout line.

After I downloaded the app, I noticed I had no less than three Amazon related apps on my phone: the Amazon app, Audible, and now Amazon Go. It was enough to file them all away in a folder titled “Amazon.” It was kind of annoying to have all these apps for different Amazon-related experiences, especially when my phone’s storage is admittedly pretty small. (I’m still stuck with 16 GB.)

The experience went without a hitch, though I had a moment of panic as I finished. Really? Should I just walk out? It went against everything I knew about shopping. It turns out it that yes, I should just walk out. I got my receipt within ten minutes in the app, and I didn’t pay for anything I didn’t grab, nor was it missing any item.

I’m not sure how I feel about the constant overhead surveillance required to maintain this degree of accuracy, however. It’s a tenuous position when we decide to throw tech as a solution for all problems. Something — in this case, privacy — is sacrificed.

With the huge campus, the badges, the landmarks, and the automated grocery store, it felt like I was walking into a self-sustained, distinctly Amazon community in the middle of Seattle. Despite efforts to integrate the company with the outside Seattle community (as with the dog park, or the community banana stand), everything about the area still felt implanted and a little foreign.

If arriving felt like crossing from Seattle into Amazon, I have to admit I felt more comfortable when I left Amazon city limits.