“Porch pirates” are the bane of shoppers who have shifted their allegiance to the convenience of online retail. Stolen packages — especially those delivered by Amazon — are the subject of countless headaches and comments from victims on community message boards.

A new analysis from Shorr Packaging Corp. out of Illinois seeks to better understand which U.S. cities are being hardest hit by the theft of boxes with the familiar smile on the side. The company got at its findings by studying data around Google searches for “Amazon package stolen” and how it relates to census estimates. CNBC reported on the analysis Thursday.

“We started with this basic assumption: When a person searches the phrase ‘Amazon package stolen,’ there’s a high likelihood that person has had a package stolen and they are looking for information about how to respond,” Andy Kerns of Digital Third Coast — the digital marketing and search company that conducted the analysis on behalf of Shorr — told CNBC.

Amazon said it shipped 5 billion packages through its Prime quick delivery program in 2017.

Shorr points out that package theft is pervasive in the country’s technology hubs, with San Francisco and Seattle leading the way. “Notable is the high concentration of wealth in these cities, which could manifest as more packages to steal (more people ordering and consuming more things) or, from a thief’s perspective, more high-value targets relative to cities with less wealth,” the report says.

Top 10 cities where “Amazon package stolen” is most Googled per capita:

Check out Shorr’s report for more details on how search results were checked against FBI crime statistics, and the methodology used in the findings. 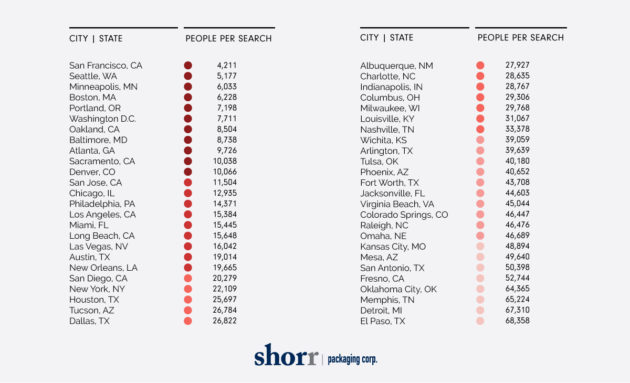