San Francisco-based Getaround is launching in Seattle today with a transportation service that’s a bit like Airbnb for cars.

The car sharing service allows people to rent their cars to their neighbors without the hassle of exchanging keys, offering a new transportation option in a city that’s become increasingly congested.

Getaround equips each car in its marketplace with hardware called Getaround Connect that syncs up with a smartphone app. Users can find cars in the app, make a reservation, and unlock the car without ever meeting its owner. In newer models, the driver can just push to start. In older cars, the keys are kept securely in the vehicle.

Getaround co-founder and CEO Sam Zaid said that even before officially launching, the service is seeing faster growth in Seattle than it did in San Francisco at the beginning. There are already about 60-70 cars available for rent in Seattle.

“The city has tremendous traffic issues and one of the real benefits of what we do is we’re reusing the cars that are normally sitting there parked anyway so we can really help address our congested freeways and take cars off the road,” Zaid said.

Unlike ReachNow or Car2Go — which place their own fleets on city streets — Getaround relies on existing car owners. 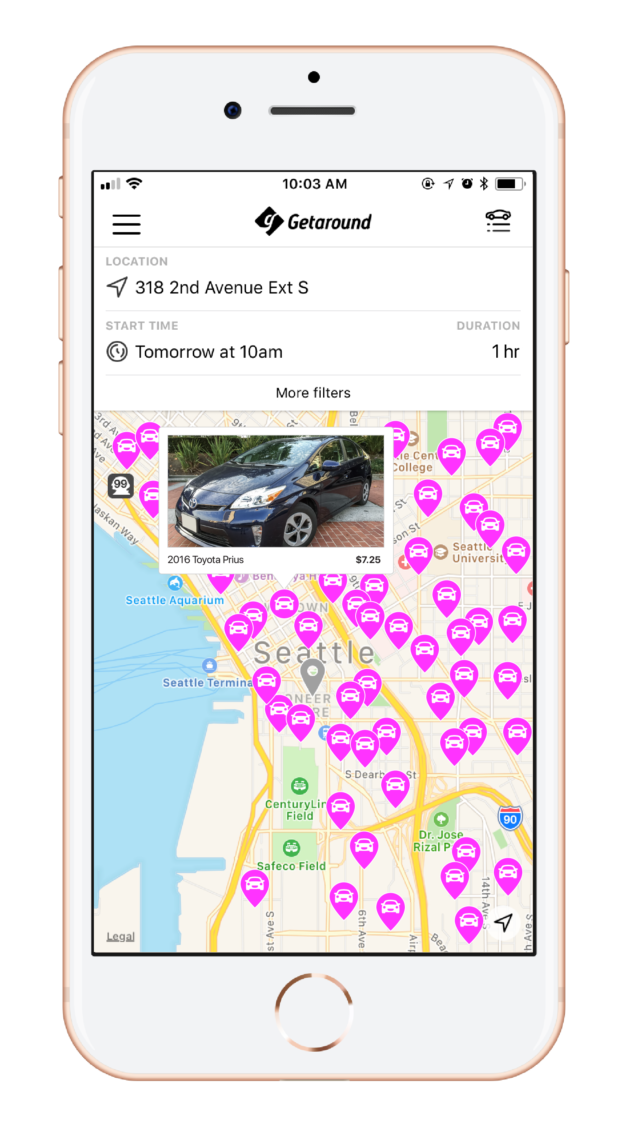 Would-be drivers have the choice of selecting cars in categories such as convertible, snow, luxury and van. The service starts at $5 per hour for a basic sedan. A Porsche runs closer to $20 per hour. Pricing is on a sliding scale with discounts for longer rentals.

Getaround says that car owners who rent their vehicles on the service make about $500 per month, and the average car owner makes about $6,000 annually. Getaround takes a 40 percent cut on rental revenue.

In Seattle, the company has hired Paul Erlandson as general manager and secured office space downtown. It also has inked partnerships with auto-body shops in the region.

“What’s great about Getaround is that so many people in Seattle who take public transit to avoid gridlock can now put their cars to work,” said Erlandson. “They make money and help alleviate the traffic they were trying to avoid in the first place. We bring it full circle, which gives the city a chance to catch up with its booming population.”

Getaround, which operates in more than a dozen cities in the U.S., raised $45 million in venture funding last year from Braemar Energy Ventures, Toyota Motor Corporation, Shanghai Automotive, Menlo Ventures and Triangle Peak Partners. The company has raised $85 million to date, according to Zaid.

The Seattle launch is part of Getaround’s broader plans to expand nationally. Getaround expanded to Los Angeles earlier this year.