Amazon really wants you to know about how Prime members can save money at its Whole Foods grocery stores.

If you’ve been inside a Whole Foods recently, you’ve seen them — the countless blue Prime signs placed, well, “everywhere,” as a Whole Foods cashier put it succinctly to me inside a Seattle store Monday evening.

Amazon is going all out with its messaging inside the stores, notifying shoppers that Prime members — who pay $119 per year for an array of Amazon-related benefits — can get exclusive deals at Whole Foods on various items. 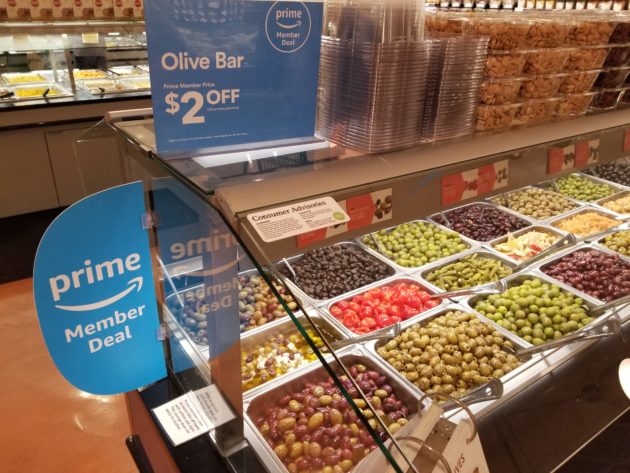 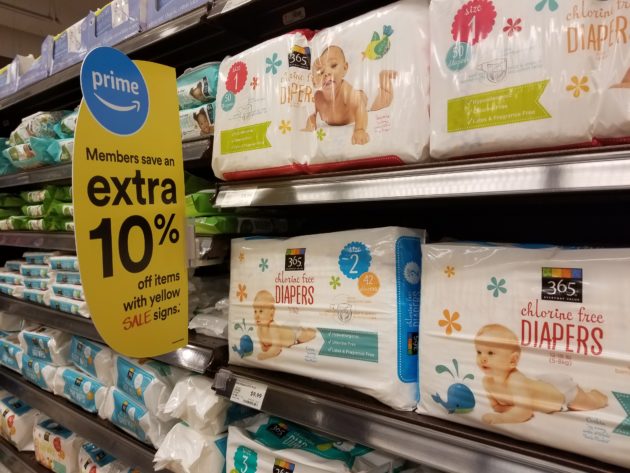 Cashiers and other workers are even wearing Prime-branded uniforms and aprons. They ask customers if they are a Prime member at the register. There is also an appointed “Prime Ambassador” at the stores. 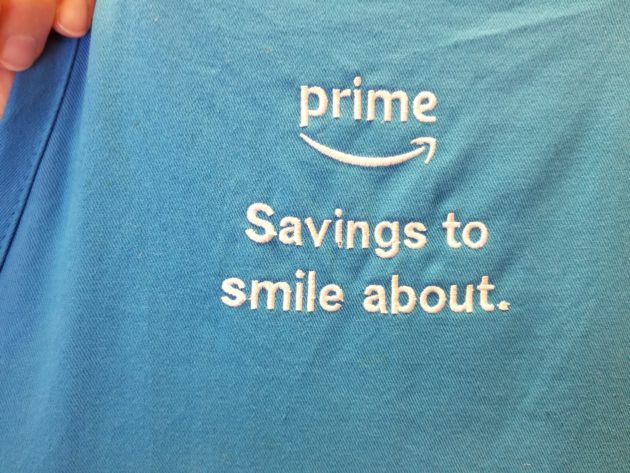 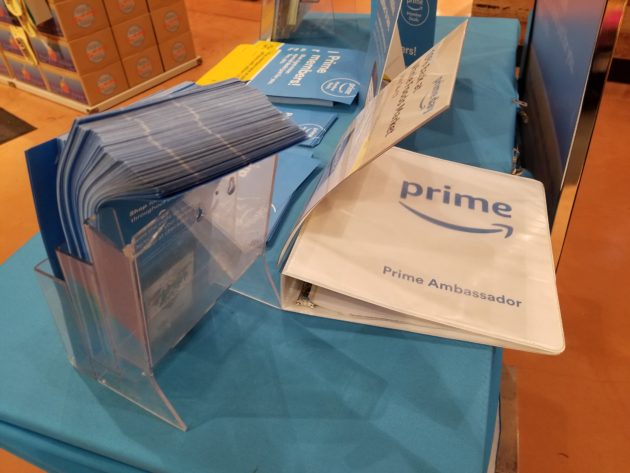 TODAY AT WHOLE FOODS
A PLAY IN ONE ACT

CASHIER: Are you a prime member?
ME: Yes.
CASHIER: You should download the Whole Foods app for special prime discounts.
ME: Oh. I thought you would just scan my retina.
CASHIER: {AWKWARD PAUSE} Ha, that's funny!

NARRATOR: Is it though?

Prime members can receive 10 percent discounts on sale items and other special deals. Amazon first announced the deal in May and expanded it to the 400-plus Whole Foods stores nationwide last month.

Next week, Amazon is amping up the savings even more for the company’s 36-hour Prime Day sales extravaganza that starts July 16. Prime members can get $10 in Amazon account credit when they spend $10 at Whole Foods from July 11 until July 17. The credit is valid during the Prime Day sales event.

Amazon Prime Rewards Visa cardmembers will also get 10 percent back on up to $400 in Whole Foods purchases, double the normal benefit, from July 14 through 17.

Discounts for Prime members work through the Whole Foods Market app. Prime members sign into the app using their Amazon accounts, and then scan the “Prime Code” inside the app when they check out at Whole Foods. They can also provide a phone number linked to the Prime account. Items eligible for additional Prime member discounts are designated by special signs in Whole Foods stores. 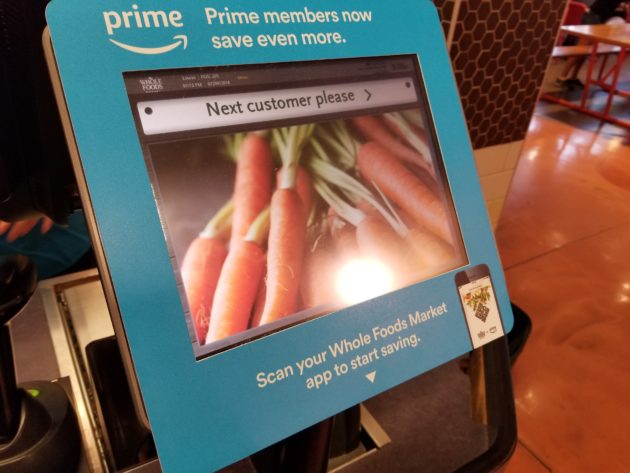 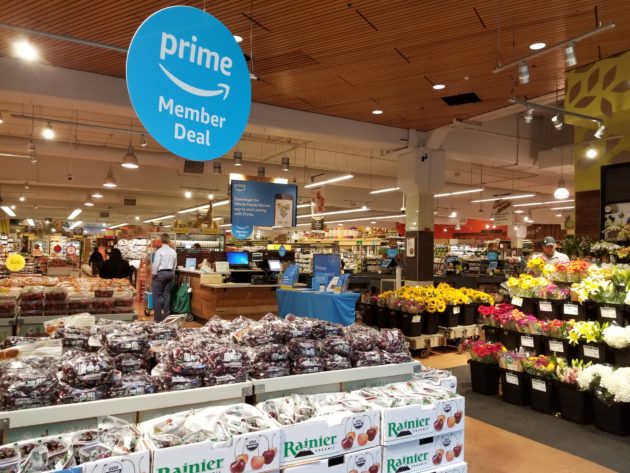 Customers can also get savings with Whole Foods grocery delivery, which is free for Prime members via Prime Now for orders over $35. The grocery delivery service is available in 19 cities, with more to be added this year.

For Prime Day, Amazon is offering $10 off orders for those that haven’t tried Whole Foods delivery through Prime Now, in addition to a $10 credit for use on a future order, until July 17. 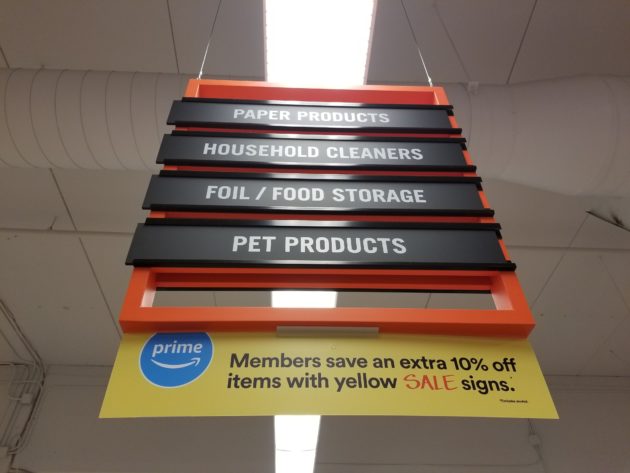 Amazon saw a big opportunity to create more value for its Prime program and add new members when it acquired the grocer for $13.7 billion last year. There are more than 100 million Prime members globally that get benefits like free shipping, cloud storage, streaming media, and more. Amazon increased the annual price in the U.S. to $119 per year, up from $99, earlier in 2018.

Prime members tend to spend more on Amazon products and services per year ($1,300) than non-members ($700), according to Consumer Intelligence Research Partners. Amazon CEO Jeff Bezos once said it’s the company’s goal to make it “irresponsible” for customers not to be a Prime member.

“We are going to try to do a lot to make Prime really valuable for when you’re shopping at Whole Foods,” Jeff Wilke, CEO of Worldwide Consumer at Amazon, said at the GeekWire Summit in October. When the Whole Foods deal closed in August, Wilke said Amazon planned to “make Amazon Prime the customer rewards program at Whole Foods Market.”

The discounts are an attempt by Amazon to give shoppers a rewards program offered by competitors like Kroger’s and Safeway, but one that is differentiated given that the Prime program requires membership fees and is much more robust. 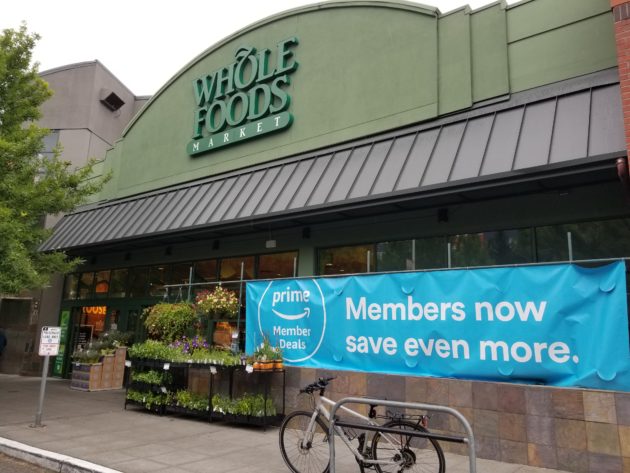 Amazon is trying to make Whole Foods more affordable, attempting to shed the grocer’s “Whole Paycheck” reputation. Amazon cut prices on many items at Whole Foods upon completing the acquisition last year, as part of its broader push into physical retail stores. However, studies showed that some prices later rose.

Some customers noted that despite all the branding, they aren’t actually saving much on their purchases.

The New Food Economy, a non-profit investigative food news website, reported last month that the 10 percent discounts are charged back to Whole Foods vendors. Tensions between Whole Foods executives and the company’s suppliers and employees have risen since the Amazon acquisition. A former Whole Foods vendor told The New Food Economy that Amazon is “playing the long game” and “is always passing savings on to customers at the expense of vendors.”

Amazon has been experimenting with grocery-related services since 2007, when it first began testing its AmazonFresh delivery service in Seattle. It has also tested various other programs from Prime Pantry to Subscribe and Save to Amazon Go, which is expanding in Seattle.