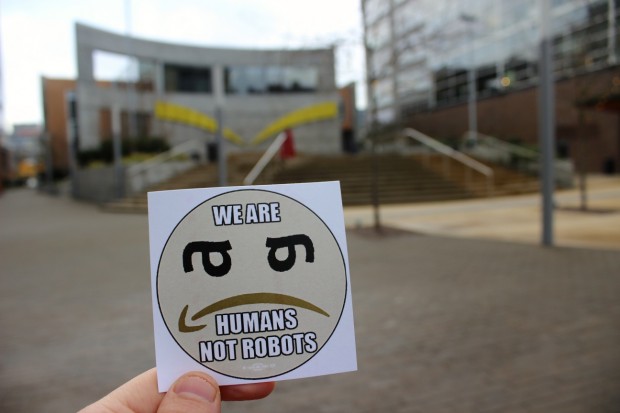 It’s Black Friday in July. Amazon’s banner Prime Day event is back for its fourth year, and is more extensive than ever, spanning 36 hours compared to last year’s 30. But not everyone will be partaking in the tech giant’s manufactured holiday. Amazon has faced mounting protests in the past months for what critics say are unfair labor practices, from low wages to bad working conditions.

And some of those critics are organizing a boycott for Prime Day, vowing not to visit Amazon on July 16-18 in an effort to hit Amazon where it counts: its wallet. Nor will they shop at Whole Foods. Or stream on Twitch. Or browse GoodReads. Or, well, anything related to Amazon and its subsidiaries, which is a vast list that ranges from the flagship Amazon.com marketplace to Amazon-owned companies and operations like Audible, IMDb, and the formidable Amazon Web Services.

This Amazon boycott, which has been generating buzz on social media in the week prior to the event, is meant to support the 72-hour strike Spanish Amazon warehouse workers announced on July 10. According to Reuters, Spanish unions called for a strike of more than 1,000 employees on July 16 to 18 to coincide with Prime Day and protest wage cuts, working conditions, and restrictions on taking time off.

There’s no way to tell just how many people will stay off of Amazon’s sites during the three-day boycott period. And for those trying to fully avoid Amazon and its subsidiaries to affect the company’s profits, it may be more difficult than they thought, thanks to the pervasiveness of Amazon Web Services.

AWS, more than any other Amazon service, bolsters the company’s bottom line. Though Amazon’s retail operation generates tons of revenue, it doesn’t contribute much to the company’s profit. AWS on the other hand, is often Amazon’s most profitable division.

That’s what makes a full-bodied boycott of Amazon so difficult. While it’s definitely possible to avoid ordering batteries from Amazon or salads from Whole Foods, it might be a little harder to avoid the retail giant’s cloud computing arm. As the world’s leading cloud computing service, Amazon Web Services provides critical infrastructure such as compute and storage to thousands of web and mobile applications.

AWS loves to tout its customer list, so you could check to see if your favorite app or service is listed as one of its case studies. But not all developers disclose the back-end services they use to power their apps, and given AWS’s healthy market share, there’s a solid chance that a given app developer is using all or part of AWS to serve their end users.

Another concern is simply that not enough people will boycott to make Amazon take notice. Consumers love Amazon: the company’s well-known customer service-and-convenience ethos has cultivated a sense of loyalty among customers.

Regardless, some people are turning away from Amazon on its busiest shopping day in the hopes of driving a bigger change and making a larger statement. At the very least, the boycotts and strikes have been generating buzz.

The Amazon division of the Comisiones Obreras (CCOO) union in Madrid has been posting on its Facebook page about negotiations with the company and the upcoming strike.

In response to the strike in Spain, the company said in a statement: “Amazon’s total compensation in Madrid is in the high range of the logistics sector and consists of base pay and an extensive benefits package: private medical insurance, a company pension plan, life assurance, employee discount and a Career Choice program that provides employees funding for adult education, offering to pre-pay 95% of tuition and associated feed for nationally recognized courses, over four years. Amazon has already invested over EUR 1.1 billion in Spain and created over 2000 permanent jobs since 2011 and we continue to be committed to Spain.”

The backlash against Amazon’s labor practices has been global. In April, British journalist James Bloodworth released a book detailing shocking warehouse working conditions, including a breakneck push for productivity that might cause employees to pee in plastic bottles instead of taking the time to use the restroom. Amazon has said its median salary (including part-time workers) is $28,446. Critics have contrasted that figure to Jeff Bezos’ six-figure salary. Bezos just became the richest man in modern history.

Amazon employees from Poland, Germany, France, and Italy are also joining the strike.

In a statement, the company said, “Amazon is a fair and responsible employer and as such we are committed to dialogue, which is an inseparable part of our culture. We are committed to ensuring a fair cooperation with all our employees, including positive working conditions and a caring and inclusive environment.”

On Twitter, the #AmazonStrike and #AmazonBoycott hashtags urge people to stand in solidarity with the the striking workers by avoiding Amazon services for three days.

#AmazonStrike begins today but workers are calling for a boycott through #PrimeDay on July 16th.

Amazon workers experience exhaustion, dehydration and injuries at the workplace.

Jeff Bezos is the richest man in the world. His workers deserve better! #UnionStrong #PrimeDay2018 pic.twitter.com/WmSQaJTkNv

If you're staying off Amazon in solidarity with workers for the #amazonstrike, remember to keep away from all their subsidiaries as well! That includes the following: pic.twitter.com/suSrdBgYAz

1/ Doubtful that the call to boycott $AMZN on #primeday will have much impact — Amazon is a beloved consumer service, and a mental monopoly — a triumph of convenience over all other considerations

This is not the only time Amazon has been at the center of ire in the past couple of months. From Seattle’s business head tax to employee pay and labor practices, Amazon has drawn criticism across the nation, and especially in its hometown.