My jaw dropped when I saw that notification pop up on my iPhone lock screen shortly after plugging in my first Amazon Smart Plug this week. Because this actually isn’t my first smart plug. It’s probably more like my 50th, including those I’ve purchased for home and the GeekWire offices, and bought for family and friends.

Never has the setup been this easy. In fact, the third-party voice-controlled plugs I’ve tried have been so difficult to set up that I stopped buying them for other people.

I have spent countless hours trying to set up third-party smart plugs with Alexa. To have this happen immediately after plugging in the new Amazon Smart Plug was amazing. Zero setup. The trick: I had previously stored my WiFi password with Amazon. First-party FTW. pic.twitter.com/BPlYQx4mfY

The new $25 “official” Amazon Smart Plug was released today but is already sold out until Oct. 24, as of this writing. It’s probably the least sexy product in the array of new Alexa-enabled gadgets announced for this fall. But in my mind, it has the potential to have the greatest impact, because it makes the most basic and fundamental of smart home devices far less painful.

Under normal circumstances, using a smart plug or other third-party device with Alexa requires first installing a smartphone app from the device manufacturer, creating an account with that company or remembering your password for your existing account, or more likely resetting the password to gain access, then linking that app to the Alexa app, praying that everything will work, swearing when it doesn’t, realizing it’s because your WiFi settings aren’t compatible with the plug, fixing those settings, then trying five more times, yelling at Alexa, getting weird looks from your family or co-workers, and then after an hour or so of misery, suddenly realizing the plug has magically started working, for no apparent reason.

At least, that is my normal process.

So you can see why I’m a feeling breathless about a plug, of all things.

Yes, the horizontal design is slick, ensuring that it doesn’t cover other plugs in an electrical outlet or power strip. The easy-to-access manual on/off button on the left side is also convenient for when your WiFi is down. 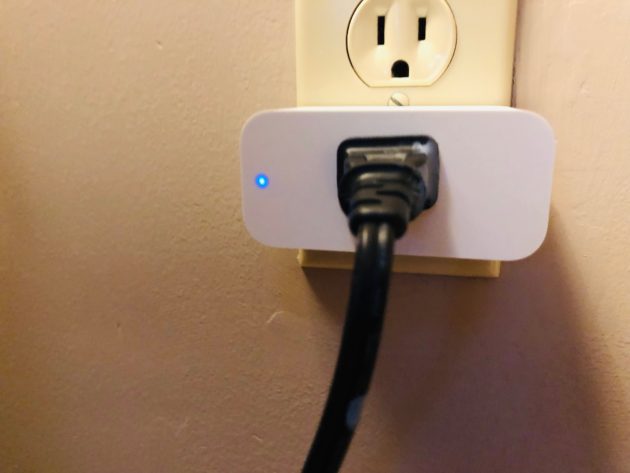 But what won me over is that it required literally no setup other than later renaming the device in the app to match my preference, which was optional.

After receiving the notification above, I plugged in a light and was immediately able to turn it on and off with my voice via the Echo Spot on my desk. (This is an important caveat, by the way: the plug does not have Alexa built in, and must be used in conjunction with a full Alexa device for voice controls.)

The trick is Amazon’s WiFi simple setup technology, which stores your WiFi password to your Amazon account and then uses it to automatically add future Amazon devices to your wireless network when you buy them with your Amazon account. This will also work with the forthcoming Amazon Basics Microwave and newer Echo devices, as described in Amazon’s FAQ on the technology.

Because there’s no third-party app involved, the setup also promises to be easy even when people don’t store their WiFi passwords with Amazon, although I haven’t yet tested that out.

Of course, this is a tricky situation for Amazon, reflecting a classic dilemma for any tech platform that also offers its own first-party apps or devices: After encouraging an ecosystem of third-party devices, it has now leapfrogged them with its own product, thanks in large part to its first-party advantage.

In the interest of full disclosure, the device that I used this week was a loaner from Amazon, for purposes of review, and I’ll be returning it after testing out. Thankfully, I also pre-ordered four of them on my own dime, and they will be arriving later today. My only regret is not buying a dozen more when they were in stock.

Bigger picture, my experience is a reminder of the huge opportunity for companies to stand out amid the coming wave of IoT devices. Often the most valuable feature is simply making something easy to use.