Seattle car owners can now get their tank filled without going to the gas station.

Silicon Valley-based Filld just launched a pilot program in Seattle for its mobile gas delivery service. Users schedule a fill-up on the Filld app and the company drives its truck to your vehicle. Gas prices are based on neighborhood gas station rates, plus a delivery fee that ranges from $3 to $9. Payment is completed through the app.

The company’s trucks operate in Seattle, Portland, and Vancouver B.C. for fleet fill-ups, like its deal with car2go. But this marks Filld’s first expansion of its consumer service outside of the Bay Area.

“Seattle is the perfect use case for testing distribution and building a flexible fueling infrastructure as gas stations increasingly continue to disappear, and city planning and urban development continue to evolve,” Filld CEO Michael Buhr told GeekWire. “The city has a wide footprint — so many people have to drive for their daily commutes or just to get from place to place. A density of drivers is something Filld looks for in determining how it might be able to serve a particular area best.” 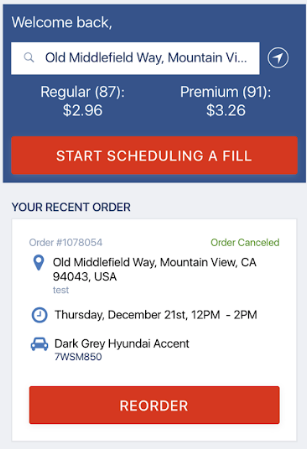 Filld has raised $16 million to date, including a $9.65 million round this past August led by Shea Ventures. The 43-person company has partnerships with car2go, Bentley Motors, Volvo, and Enterprise Rent-A-Car.

“By removing the overhead associated with running a brick-and-mortar station, we’re able to offer prices comparable with your local station, but with the added convenience of delivery,” the company’s website notes. “We enjoy making our customers’ lives easier, and Filld eliminates the chore of stopping for gas (forever).”

Filld competes with Booster Fuels, a company that originally started in Seattle but relocated to SIlicon Valley in 2016. Booster raised a $20 million round this past August and focuses on partnering with big employers in Southern California, Dallas, and the Bay Area.

Other gas delivery startups include Yoshi and Neighborhood Fuel.