Microsoft Surface devices primarily target high-powered creative types at a substantial price point, but the tech giant is looking to change that with a new $399 hybrid tablet.

Microsoft unveiled the new Surface Go tablet Monday, which is aimed at the education market as well as workers on the go. The device adds another option to the Surface lineup, as Microsoft competes with Apple’s iPad and Google’s low-cost Chromebooks that have become a fixture in the classroom.

The device includes the frequently requested USB-C port in addition to the Surface Connect port, a headphone jack, SD card reader and a built-in stand. With a 10-inch display, Go is Microsoft’s smallest and lightest Surface so far. But it doesn’t lack for power, featuring a 7th Generation Intel Pentium Gold Processor 4415Y and a nine-hour battery life.

Surface Go will be released Aug. 2, and an LTE version will follow later this year, Microsoft’s Chief Product Officer Panos Panay wrote in a blog post.

Surface Go will run Windows 10 Home in “S Mode,” the stripped down version of the operating system that folded into Windows after debuting as a standalone product in 2017. Education customers can choose between Windows 10 Home or Pro, which includes more security and management tools. 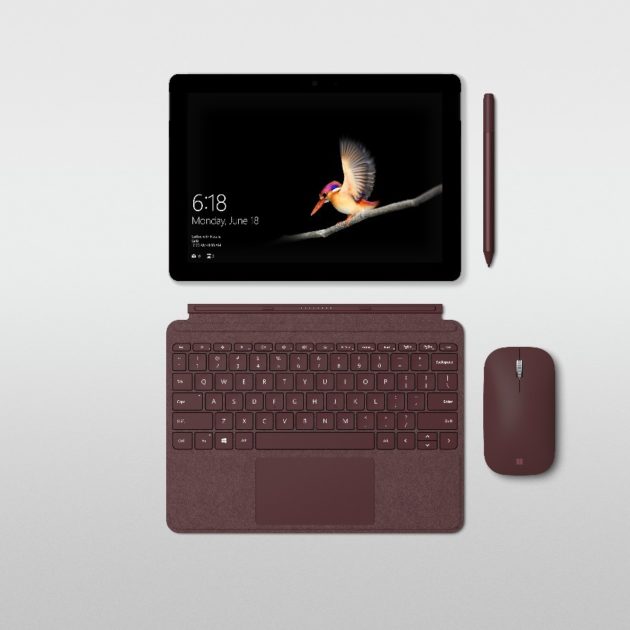 The $399 price is for the device only. Microsoft is rolling out a variety of accessories to go with the device, including a Surface Go-specific keyboard for $100 and a new Surface Mobile Mouse for $35. It is also compatible with the $100 Surface Pen for writing directly on the screen.

Go joins the Surface device laptop lineup that includes the flagship Surface Pro, now in its fifth generation; Surface Laptop; Surface Book and Surface Book 2; Surface Studio and the second generation Surface Hub, which could be available for purchase next year. Starting at $799, the Surface Pro was the least expensive offering among the current generation of devices until Surface Go came along.

Microsoft has had trouble keeping the device a secret, with rumors of Surface Go floating around for sometime. Microsoft even hinted at the release date and time on Twitter this week.

Where will Surface go next? pic.twitter.com/9lz3MJmBAT

Here’s what GeekWire contributor and veteran education technology strategist Frank Catalano had to say about Surface Go and what it means for Microsoft in the education arena after getting a chance to try it out at the International Society for Technology in Education conference in Chicago:

The touchscreen was sharp and very responsive. The Type Cover’s keys, similar in size to shrunken HP Mini netbooks of a decade ago, were comfortable and could be typed on with big adult fingers. But it did take some care and slowed down typing speed, at least until larger hands in theory eventually adjust to it.

Surface Go is not as inexpensive as Apple’s newest $299 (at school pricing) 9.7″ iPad with Apple Pencil support, or a number of Google Chrome OS-based Chromebooks. That includes the first Chromebook tablet, the $329 Acer Chromebook Tab 10.

But it seems as though Microsoft is not trying to claim the low end of the edtech hardware market. There are already a number of low-priced Windows devices from Microsoft partners that the company has been aggressively promoting. Instead, the Surface Go may be more Microsoft firmly stating its intention to be a committed player in education hardware as well as software, much as Apple did when it introduced its new iPad with an emphasis on school uses. And both companies still face an uphill climb against Google and Chromebooks, which have been dominant in U.S. K-12 classrooms.

Microsoft told GeekWire at ISTE that it sees grades K-8 as a likely target for the Surface Go in education, with grades three through six as a sweet spot. The company also said it envisions Surface Go as a secondary device for teachers.