The Seattle startup today announced a new $3 million investment round led by Cowboy Ventures, with participation from Madrona Venture Group, Vulcan Capital, and Greycroft Partners. Total funding in the company is now $5 million.

LumaTax, which spun out of Seattle-based startup studio Pioneer Square Labs last year, takes information from a business and automatically files sales tax returns on their behalf. It audits financial data to ensure companies are staying compliant with tax laws.

LumaTax CEO Robert Schulte told GeekWire that the company prides itself on the idea of a “touch-free tax return.”

“My belief is that if a car can drive itself, a tax return should file itself,” he noted. 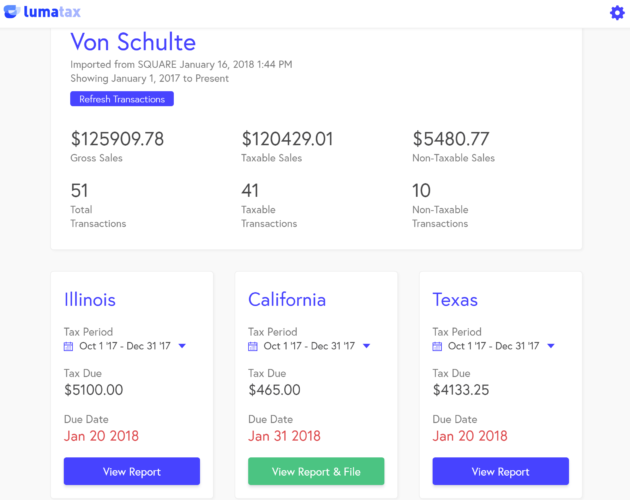 The 20-person company already partnered with Quickbooks to place its product on the Quickbooks App Store; now it is doing something similar with payments giant Square and its Square App Marketplace, giving LumaTax exposure to millions of new small businesses.

Schulte, who was previously a senior tax auditor for the State of California, noted how it’s unfair that small companies must adhere to the same tax regulation and filing process as larger giants that have multiple employees focused solely on taxes.

“We need to level the playing field for all companies if we’re going to move in a direction where e-commerce marketplaces are fair for everyone,” he added. “The small guy needs access to enterprise quality resources, but not at enterprise quality prices.”

Filing taxes may become more complicated for small e-commerce businesses, as the Supreme Court is looking over a potential law reversal that would force online retailers to collect sales taxes, regardless of where they have a physical presence.

If that happened, Schulte said it would be “great” for LumaTax, given that many small businesses would need to figure out how to report sales tax for different states. But he added that the Supreme Court conversation should focus on how much a burden the government places on small businesses.

“There are some things they could do to eliminate that undue burden on the small businesses, which are really the driver of growth in the U.S.,” Schulte said.

LumaTax was one of the first spinouts of Pioneer Square Labs, a Seattle-based startup studio that just raised its own venture capital fund. It has spun out five other startups since 2015: