LinkedIn was a stand out of Microsoft’s latest earnings report, as the business social network saw a 37 percent jump in revenue and record highs in engagement and number of jobs posted.

LinkedIn brought in more than $1.3 billion in revenue this quarter, up from $976 million in its first full quarter under the Microsoft umbrella. LinkedIn is still operating at a loss, mostly due to long-term costs associated with the acquisition, and that figure has declined every quarter since the deal closed.

LinkedIn is part of Microsoft’s Productivity and Business Processes segment, which reported just over $9 billion in revenue for the quarter. LinkedIn accounted for about 14 percent of that segment’s revenue.

Microsoft CEO Satya Nadella called out LinkedIn’s performance on a call with investors Thursday, saying its user-first philosophy has rubbed off on Microsoft’s product development teams.

“From the start we recognized the opportunity for LinkedIn and Microsoft to combine forces and create economic opportunity for every member of the global workforce and enable professionals to be more productive and successful,” Nadella said. “A little over one year in we feel great about the value we are delivering for members, customers and shareholders. Our integration model has helped LinkedIn accelerate growth while retaining its member-first ethos.” 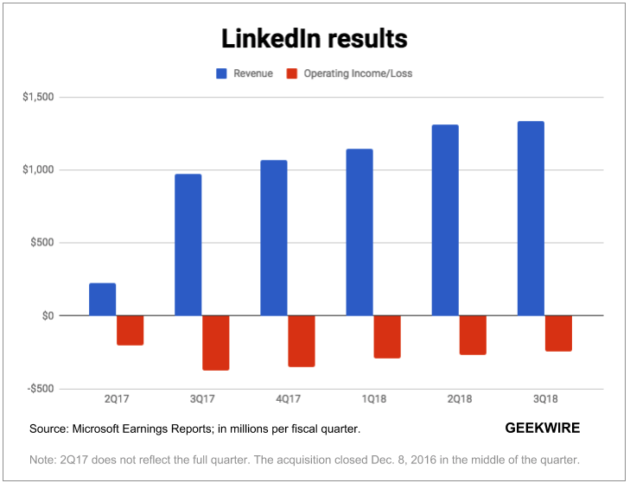 Microsoft’s acquisition of LinkedIn for $26.2 billion was the biggest buy in the company’s history. Since the acquisition, the combined companies have been steadily rolling out integrations like adding LinkedIn data into Office 365 programs such as Outlook.

The deal gives Microsoft a greater reach as LinkedIn has more than 500 million members (as of last year) and a wealth of professional data to fold into its enterprise software products.

In an interview on CNBC last week, LinkedIn CEO Jeff Weiner said the integration with Microsoft has “exceeded expectations” so far. And while LinkedIn continues to operate independently, the injection of Microsoft’s vast treasure chest of resources has helped the company grow.

“LinkedIn continues to operate independently, but we are also able to leverage Microsoft’s huge footprint of roughly 1 billion customers on a global basis, their talent, their infrastructure, their advanced technology,” Weiner said. “So, so far so good.”