Do you find yourself struggling — whether in your startup, day job, or life — and wondering, why does it seem like I’m not getting anywhere?

Maybe it’s not just you.

Despite our American notion of hard work and bootstrapping, it turns out a lot more goes into determining our success than we think — like everyone else around us.

In The Formula: The Universal Laws of Success, Albert-László Barabási tackles the question of who is most likely to rise to the top, and who won’t, by applying his work at Northeastern University’s Center for Complex Network Research, analyzing years of data across multiple fields. Barabási’s five universal laws for success know no bounds — they apply to every field — and can explain the success of everything and everyone, from Exploding Kittens to Einstein.

Barabási even turned the data for success into “formulae we could use to predict future outcomes for ourselves, our colleagues, and even our professional rivals.” 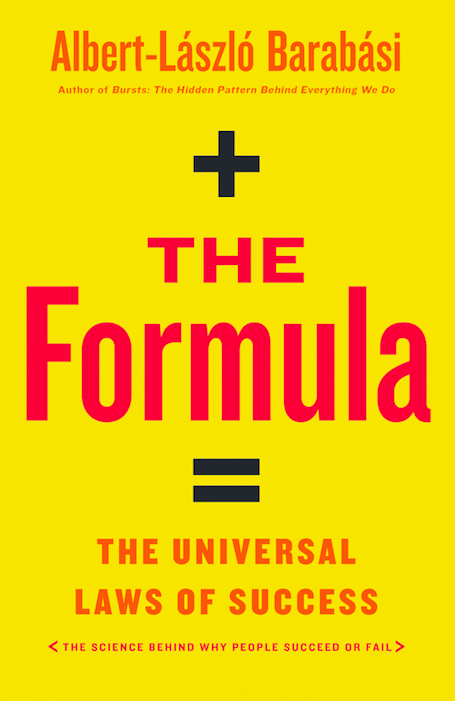 While we’ve had more than a few books that look at success, many from an anecdotal perspective, this is a fantastic book backed by real data. Some of Barabási’s findings may seem like no-brainers — yes, of course, your network helps determine your success — but the difference here is that he explains the why behind what we may already know.

The Formula also happens to be a breezy, enjoyable read. Barabási expertly weaves his storytelling with real-life examples, then goes into explanations, and sets you up with the cliffhanger for the next chapter. It’s rare that a book about success turns out to be such a page-turner, but there you go. File this away with Freakonomics or Outliers.

Here, Barabási answered questions about his book and findings, especially when it comes to what the tech world can learn.

There have been quite a few books about why certain people are successful and others are not. Can you explain how applying your data crunching helped bolster your case and find the patterns to “prove” who is likely to succeed — and who won’t?

Albert-László Barabás: There are many fantastic books on many accomplished individuals’ path to success. They all lack, however, the control cohort: by looking at only those who have achieved something remarkable, you do not really see what distinguishes them from those who failed to achieve the same level of recognition.

In our research, we avoided this methodological blind spot by exploring the career patterns of all scientists, not only those that received a Nobel Prize, and all artists, not only those who made it into the MOMA. In medicine, the FDA forces you to use a placebo to prove that a drug works. Similarly, to unveil the laws of success, we must pay as much attention to those who did not succeed, as to those who did.

Networks play a crucial role in success, and that we’ve known for some time. Please explain how your discoveries about human networks surprised even you when it comes to determining who will be successful.

Networks play a key role when there is no objective way to determine performance. If you are an elite runner, your speed uniquely determines your success. In most areas, we can tell slow from fast, weak from strong, but we cannot truly distinguish two individuals who are both good at what they do.

Indeed, while your performance is about you, your success is about us.

Even music experts are unable to rank the good pianists based on their talent or performance, and wine experts, while they agree on the bad wines, utterly fail reliably telling apart the good wines.

The real surprise was to learn how extreme is the role of networks in art. As there are no inherent, objective criteria of quality in art, value is set by an invisible network of curators, collectors, and critics. The effect is so strong that now that we have mapped this network out, we can predict, with remarkable accuracy, the future career of any artist.

This book puts a lot of potential for success on other people around us, not us. What is your advice for getting out there to increase the quality of your network?

If you are not a runner, and networks do play a role in your profession, I would first focus on your ability to get that network to appreciate what you do. Once you achieve this, then you must start asking which nodes are critical to your success. It’s a myth that we can change the network. It is much bigger than us. We can only hope improve our position in it, to empower our success.

If you are a woman or minority who usually starts a few rungs below on the success ladder, what are some things you can do to even the playing field?

Minorities benefit the most from affiliations with prestigious institutions. Indeed, who does not want to send their kids to Harvard and Stanford, honestly believing that the superb education offered by those elite schools will guarantee their success in life?

Yet, the data clearly shows that it is your kid who makes Stanford great, rather than Stanford making your kid successful. The graduates of the elite schools do well because they were better at admission, rather than the school enhanced their chance of success. These students will succeed, big time, no matter where they graduate from.

Minorities and underrepresented groups are the only exception to this finding — prestigious institutions can significantly enhance their income and career success. For them, the doors that that elite schools open would have remained closed otherwise.

Companies like Likewise in Seattle are tapping into the power of peer reviews, not anonymous, to influence consumer habits. How do you see companies taking the power of preferential attachment even further?

Peer-review based valuations are strongly affected by herd effects. Consequently, the first to voice their opinion often define the conversation and shape disproportionally the opinion of the later reviewers. This pattern affects the music that becomes popular, the products we buy, and even the approval of medical devices by the FDA. And once “expert” opinion is in, a rich-gets-richer phenomenon takes over, and propels the public’s opinion in a direction that may have little relationship to performance.

For many, the fifth law is encouraging, especially in tech, where the perception is that valuable ideas/contributions only come from the young. How have people responded to the “creativity has no age limit” law?

I can certainly say that it had changed my perspective on work and life. All previous research suggested that innovation and youth are deeply intertwined. If I took that data on face value, I should stop doing research, as the chance that I will make a big discovery, at 50, is negligible.

It’s a myth that we can change the network. It is much bigger than us. We can only hope improve our position in it, to empower our success.

Access to big data caused a complete shift: We found that innovation has no age limit — it is productivity that wavers with age. In other words, innovation appears to slow down with age only because people stop trying.

For me, this means that I need to stay focused on my lab, and keep trying to make new discoveries, as it could be the very last paper that I write that will define my career. I certainly hope it will be!

What are you working on next?

We are now taking the science of success tools, test-driven on scientists and artists, and applying it to the rich layers of data increasingly available on entrepreneurs.

Are there patterns that define who and when will found that next unicorn? How important are network effects, and which networks matter in this space? Do institutions, like successful VC firms, incubators, bring success to the individual? Or are they just like Harvard — who admit only those destined for success?

We hope to bring the power of big data and network science to gain quantitative answers to these questions.

The Formula: The Universal Laws of Success by Albert-László Barabási is out this week.