Trending: Leafly slashes 18% of workforce to align business with ‘market realities’ of tech and cannabis industry
Sponsored by 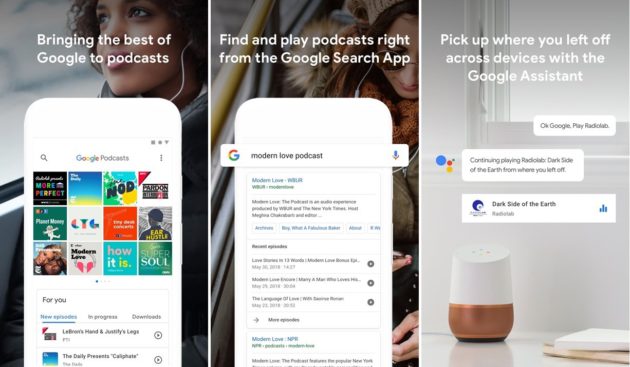 Details of Google Podcasts, the search giant’s new Android app for listening to audio shows, leaked overnight in advance of its official release, and one feature is especially noteworthy for anyone who has ever tried to continue listening to a podcast on a smart speaker after starting a show on a smartphone, or vice versa.

The new app will use the Google Assistant to let listeners pick up where they left off on Google Home speakers or other devices connected to their Google accounts, according to a promotional slide published on Product Hunt along with other details of the new app.

Yes, it’s a simple thing, and it should be seamless in our increasingly connected world, but it’s actually not easy to do on Amazon’s Alexa-enabled Echo speakers.

The new Google Podcasts functionality also integrates with the Google search app to let users find and play podcasts inside the search experience.

In effect, Google is using two of its biggest strengths, Internet search and Android, to one-up Amazon Alexa and attempt to catch up with Apple in podcasts.

However, the Google Podcasts app has other limitations, most notably the fact that it’s Android-only — no iOS app for now. Apple has been a longtime leader in podcasts, originally with iTunes and now with its Apple Podcasts app.

Google is focusing on its own mobile platform for now, hoping to make up lost ground with a global release of the new Google Podcasts app on Android.

We discuss the new app in more detail on our Geared Up podcast. Listen to the episode in the player below or subscribe to Geared Up in your favorite podcast app to listen on the go.

“Over two billion people use Android, and we believe Google Podcasts can help double worldwide podcast listening over the next couple of years, primarily through seamless integration with Google Assistant and AI-powered features starting with personalized recommendations,” says Google Podcasts product manager Zack Reneau-Wedeen in a post on Product Hunt this morning.

Based on my searching this morning, the podcast integration within the Google search app doesn’t appear to be available on iOS either, at least not yet.

Steve Pratt of Pacific Content broke the news of Google’s new podcast strategy in late April. Android Police has more details on the impending launch of the app. Paul Thurrott has an early hands-on review of the Android experience. Google Podcasts should be available here in the Google Play store when it launches.