Rigado has raised a $15 million investment round to fuel growth of its commercial IoT technology products and services.

Founded in 2010, the Portland-based startup sells a “edge-as-a-service” solution to more than 300 customers that need connectivity for smart buildings, asset tracking, connected retail, and other applications.

Madrona Venture Group led the Series A round, which included participation from Vanedge Capital, Rogue Ventures, FusionX Ventures and the Oregon Venture Fund.

Len Jordan, managing director at Madrona, told GeekWire that the Seattle-based firm is focused on the “accelerating market trends around cloud and edge computing.”

“Our investment in Rigado unifies these two themes as their platform marries edge computing with the cloud while providing the management, scale and security for next-generation IoT applications,” he added. 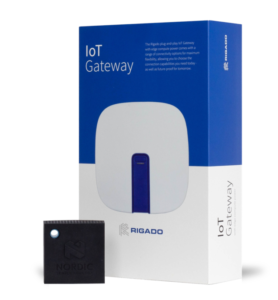 “With Cascade, developers are able to get started faster, focusing on their applications rather than supporting systems and infrastructure,” explained Rigado CEO Ben Corrado. “IoT support teams are able to efficiently secure, monitor and update edge solutions with little to no additional team or tools. And business teams benefit from reduced development, support and no up-front hardware costs, creating a faster path to ROI and aligning Cascade with the SaaS models common in commercial IoT.”

Some of Rigado’s customers include large quick serve restaurants which use the edge computing technology to power table food delivery service. Other use cases include smart accessories; exercise equipment; concrete sensors, and more.

Corrado said Rigado is different than companies in consumer or industrial IoT, which are either focused on smartphones or heavy-duty expensive systems.

“Neither of these technical approaches are very well suited to the needs of commercial IoT, in which popular applications like smart lighting, asset tracking or patient monitoring are being deployed into workplaces, restaurants or hospitals,” he said.

Rigado added that many companies try to employ a do-it-yourself approach for the wireless design process.

“However, most find that the design, development, test, certification and management of a custom wireless platform for their IoT products is not within their expertise — or the best use of their resources,” he said.