Addressing Microsoft’s GitHub deal Wednesday at a Fortune Magazine event in San Francisco, Greene said, “I wouldn’t have minded buying them, but it’s OK,” according to a Bloomberg report. Her comments followed an earlier CNBC report that Google had discussed a potential deal with GitHub in the weeks leading up to the announcement of Microsoft’s $7.5 billion acquisition.

Greene added, “I really hope Microsoft can keep them totally neutral,” pointing to Google’s own use of GitHub.

Her comments echoed concerns raised by some of GitHub’s users after Microsoft announced that it would buy the company and install a Microsoft executive, former Xamarin CEO Nat Friedman, as GitHub’s next CEO.

Those concerns are rooted in part in Microsoft’s contentious history with open-source projects, which is still remembered by many developers even as the Redmond company has become the top contributor to GitHub as part of a larger move toward open-source technologies.

“Our key goal, primary goal, is to not mess with what’s working there, and so you’re going to see us take a very hands-off approach,” Russinovich said.

GeekWire’s Tom Krazit asked Russinovich if making it easier to use Azure via GitHub means it won’t be as easy to use rival public cloud services from Google or Amazon Web Services.

“Absolutely not,” Russinovich said. “It’s going to be all very light touch.”

“You’re not to see any kind of major preferential difference or advantage given to us over anybody else,” Russinovich said. “We realize that that’s really important. So many people are concerned that we’re going to come over and mess with it and channel it all to Azure and really just fundamentally violate the whole principle of what GitHub was founded on. We’re very sensitive to that.” 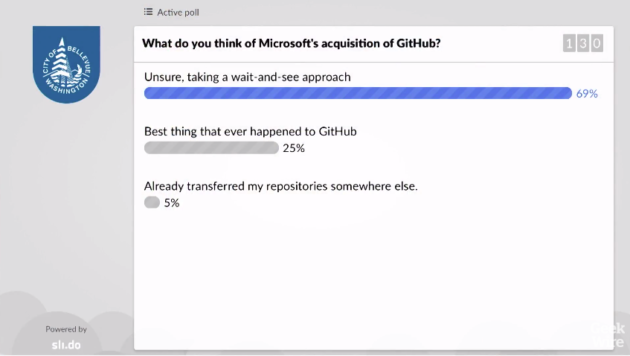 Even after reiterating that promise, Russinovich witnessed the concerns first-hand. Later in the session, the initial results from an informal poll of Cloud Tech Summit attendees showed that 69 percent of respondents were unsure about the deal, and taking a wait-and-see approach.

Twenty-five percent picked option #2, calling it the best thing that ever happened to GitHub, and 5 percent said they’d already transferred their repositories elsewhere.

Asked what he’d say to those taking a wait-and-see approach, Russinovich said,  “I’d say wait and see, because we’re going to prove #2 right.”