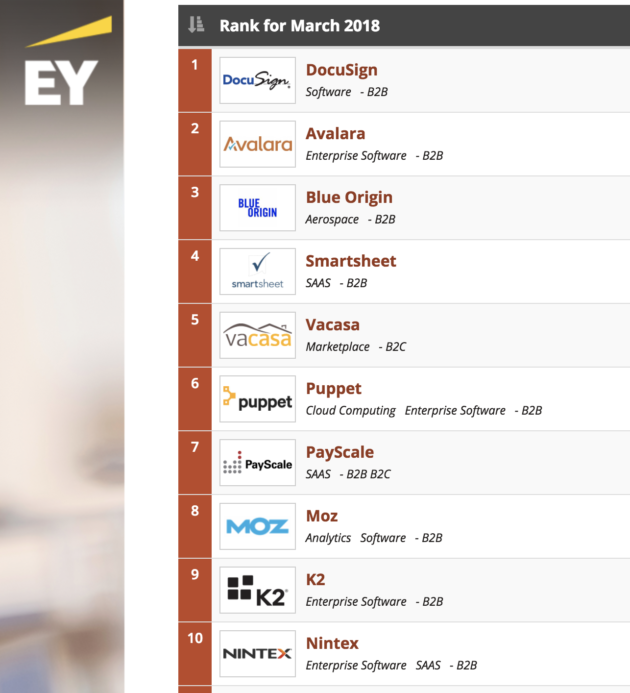 Two of the top five companies GeekWire 200, our ranking of the Pacific Northwest’s top startups, are going public, leaving several top spots up for grabs for the first time in years.

Smartsheet, the Bellevue, Wash. startup that manages and automates key work processes and currently occupies the fourth spot on our list, filed for an initial public offering Monday. Not to be outdone, digital signature giant DocuSign, which has loomed over the GeekWire 200 as the top company for the better part of three years, filed to go public just two days later.

In one week, that’s more GeekWire 200 IPO action than we saw all of last year, when only Redfin exited our list by going public. Note to those companies looking to climb the rankings, DocuSign and Smartsheet will remain on the list until their stocks start trading.

GeekWire staffers John Cook and Taylor Soper said DocuSign and Smartsheet would be off the list by year’s end as part of our GeekWire 200 predictions for 2018. However, both leaned on acquisitions over IPOs, so they only get half points. I listed the favorite to take over the top spot following DocuSign’s IPO, sales tax automation company Avalara, as an IPO candidate this year, along with OfferUp and Rover. Make me look smart, folks!

NurseGrid, a Portland, Ore. startup that builds a staffing and scheduling technology platform exclusively for nurses, was the biggest riser this month, climbing a whopping 36 spots to number 128.

The company raised $5.7 million in January to expand its platform and add new services. As it takes on money, NurseGrid has taken on a lot of new people too. The team nearly doubled to 34 employees in 2017, and LinkedIn puts its current employee count at 48.

Simplifying the healthcare system is a herculean task, but one that a lot of different startups are tackling. Last month we highlighted 98point6, a Seattle startup building primary care system that’s entirely virtual and aims to bring down healthcare costs while increasing access.

LiveStories provides a platform that helps government agencies manage, visualize and publish data, and it is a 2014 graduate of TechStars Seattle. This month, LiveStories rose 15 spots to number 164.

Last summer, LiveStories raised a $10 million Series A round to bring its total funding to $13.9 million. The company said it had about 20 employees when it landed the funding round, and today its LinkedIn count is roughly double that.

Investors are getting more bullish on startups with a civic lean. According to data from PitchBook, impact investing — putting money into startups looking to do social or environmental good — is on the rise, with $3.4 billion committed to impact funds across the globe in 2017. PitchBook reports that major investors such as TPG and Bain Capital have started making impact investments. The push is spurred, according to PitchBook, in part by the pension, insurance and government funds that contribute to the investment groups.

IndieFlix, an independent film company and streaming service in Seattle, is getting a lot of attention for a documentary called Angst that aims to raise awareness around anxiety disorders. The company rose 10 spots to number 162 this month.

In addition to the documentary, which is being shown in theaters across the country, IndieFlix offers a complementary virtual reality experience that simulates what it’s like to have a panic attack. “By experiencing the Angst VR component in addition to watching Angst the movie, we believe we can have an even deeper and more meaningful conversation around mental health,” according to the product website.

IndieFlix’s streaming service costs $4.99 a month, a bargain compared to Netflix and Amazon Prime Video. And you get a little something different, as the company lives up to its name by offering more independent shows and movies on its service.

Here are a look at some of the other big risers this month:

Five startups made their debut on the GeekWire 200 or returned to the list in March. They are Algorithmia, RiskLens, Crowd Cow, Utrip, Bag Borrow or Steal.