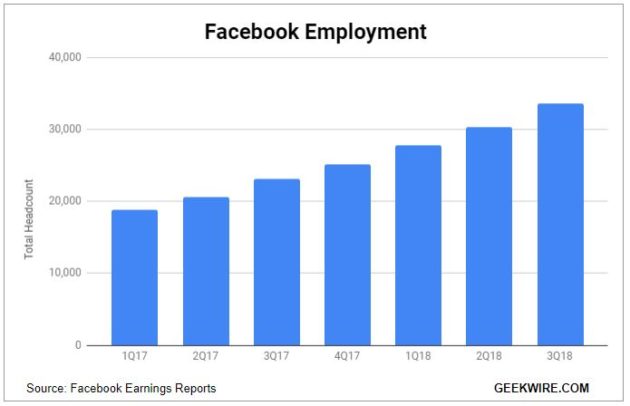 Facebook is making regular headlines for expanding its footprint with big new office leases in the Seattle region, and new numbers from the social networking giant help to explain what’s generating the appetite for space.

The company added more than 10,000 people worldwide in the past year, a 45 percent increase that brings its total headcount to 33,606 people as of Sept. 30, according to numbers disclosed in its third-quarter results. Facebook added more than 3,300 people in the last three months alone.

That still pales in comparison to older tech companies like Amazon (613,000 employees, including Whole Foods), Google parent Alphabet (94,000), and Microsoft (135,000). But it’s a record for Facebook in both yearly and quarterly growth, underscoring the fact that the company is still very much in growth mode, even as it grapples with privacy challenges, increased regulatory scrutiny and the departure of key executives from past acquisitions.

Facebook has been expanding rapidly in the Seattle area, solidifying the region’s position as its largest engineering center outside of its headquarters. The company opened a large new office building in Seattle earlier this year, less than two years after opening another big new building nearby, giving itself enough room for 3,000 people in the city.

Meanwhile, the company has been growing significantly in nearby Redmond and Bellevue, Wash., including two new office leases confirmed this week.

For the September quarter, Facebook posted $13.73 billion in revenue, coming up just short of analysts’ expectations of $13.78 billion, but beat expectations on the bottom line with earnings of $1.76/share, compared with expectations of 1.47/share.