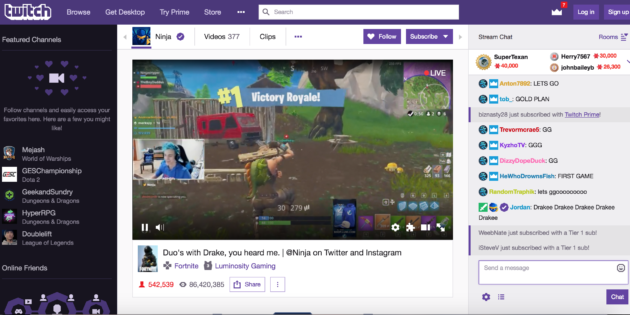 Ninja (Tyler Blevins) live streamed the action on Twitch — he looped in Drake’s voice mic via Discord — and broke concurrent streaming records. More than 600,000 people tuned in at once, smashing the previous record of 388,000.

Drake tweeted the Twitch link to his 36.8 million followers.

It was a bit surreal hearing Drake’s voice and watching him play video games. While the two played “Duo” — 50 teams of two players, battling until the last team stands — they also talked about everything from music to food. In between bites of pizza, Drake said he had been playing Fortnite for a few months. The rapper, who also revealed that he no longer eats meat, said he likes to play Fortnite as a way to relax after making music in the studio for 20 hours.

The pair won their first game — Ninja certainly carried the load, but Drake has some impressive skills for a newbie.

I want to play Fortnite now ?

Tell the boy drizzy he don’t want it with Bobby! ??

Drake started following Ninja on Instagram last week. Ninja is one of the most popular Fortnite streamers who is making $350,000 per month from Twitch subscriptions. It’s unclear how tonight’s session was organized but much of it seemed organic — just a couple gamers teaming up for some Fortnite action on a Wednesday. Pretty cool, right?

I really can’t express how happy I am for Ninja. He’s been grinding for so many years and I remember watching him in Halo way back. Dude has always been a freak of nature at gaming. Now his genuine personality is getting the attention it deserves. The future is bright.

It was a historic moment for the gaming industry, and also for Amazon, which acquired Twitch for nearly $1 billion in 2014. At one point during the stream, Ninja asked viewers to subscribe to Twitch Prime, a bundle of Amazon Prime benefits specifically aimed at gamers.

I feel like we'll look back on this as a moment in esports/Twitch history 20 years from now. Fun times ahead. https://t.co/mJYbciOtMq

It's moments like these that show the real mainstream influence of gaming. And it's only going to keep growing!

Huge props to Twitch, Epic, & Ninja. Tonight marks the craziest moment in gaming I have ever witnessed in my life.

Twitch counts 15 million daily active users who spend an average of 106 minutes on the platform.

Fortnite, meanwhile, is the most popular multiplayer game right now, with more than 40 million players worldwide.