Washington voters defeated an initiative to combat climate change that drew endorsements and millions of dollars in support from the tech sector. Initiative 1631 lost with 56 percent of voters siding against the measure. The initiative passed in the state’s populous King County, which includes Seattle and Bellevue, as well as Jefferson and San Juan counties.

The side opposing I-1631 was led by international oil and gas companies and raised nearly twice as much as those in favor, which included environmental groups, technology leaders and labor interests. The “no” campaign ponied up some $31.5 million, while proponents raised $16 million.

Those in favor of state-led actions to fight the dire effects of global warming were closely watching Washington’s ballot measure. If approved, it would have marked the first time that voters anywhere elected to put a price on carbon dioxide pollution.

On Tuesday evening, Nick Abraham, a spokesperson for Yes on 1631, vowed to keep fighting for the cause.

“[W]in or lose, this problem isn’t going anywhere and neither is this coalition,” Abraham said.

Opponents celebrated their win with a message that curiously pegged the vote as a boon to the environment.

“This is a clear victory for working families, consumers, small businesses and family farmers across our state — as well as for our environment,” said Dana Bieber, No on 1631’s spokesperson.  “Washington voters have soundly defeated this costly, unfair and ineffective energy tax.” 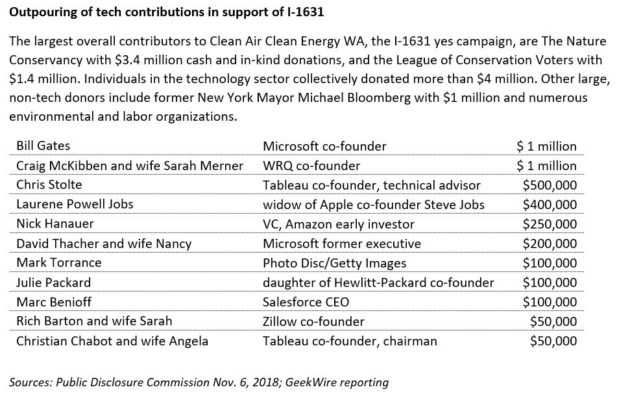 I-1631 proposed a fee on carbon collected from petroleum companies and utilities, bringing in $2.3 billion over the first five years of implementation. The money would be invested in clean energy technologies, with the aim of improving forest health and preventing wildfires and assisting communities most harmed by climate change.

The measure was arguably a natural fit for technology leaders, entrepreneurs and employees. Many in the sector tout technology as a solution to some of the world’s greatest challenges, and plenty of people — Microsoft co-founder Bill Gates among them — believe that climate change is one of the planet’s most urgent and daunting threats. The fee was intended to accelerate those solutions, creating jobs and startup opportunities in technologies to save energy, create clean power, make better batteries and improve fuel efficiency in transportation.

Last month, top scientists warned that the world will experience severe effects from climate change sooner than expected unless we quickly embrace significant cuts to greenhouse gas emissions. The report by the Intergovernmental Panel on Climate Change said that the planet must dramatically curb the release of carbon dioxide and other pollutants over the next dozen years to cap warming at 1.5 C, otherwise risk serious flooding, droughts, and heat waves. They predicted worsening wildfires, food shortages and massive die-offs of coral reefs.

Those opposing the initiative argued that it would cost residents and businesses too much in higher prices at the pump and utility bills. While financial support came largely from international refineries — namely BP, Phillips 66 and Andeavor, which was previously known as Tesoro — some state and local business and farming groups signed on in opposition. That included the National Federation of Independent Business local chapter, which represents small businesses, the Association of Washington Business and the Building Industry Association of Washington. 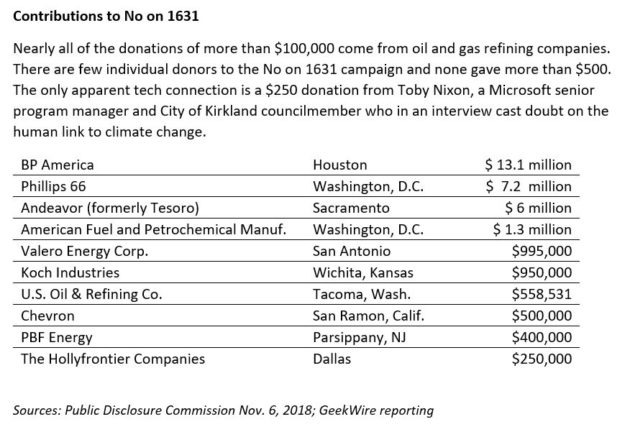 Washington voters rejected another carbon measure two years ago, and Gov. Jay Inslee took a shot at putting a price on planet warming pollutants  in 2014 and 2018. Other West Coast governments have succeeded where the Evergreen State has failed. British Columbia and California both have policy in place to discourage climate-warming pollution.