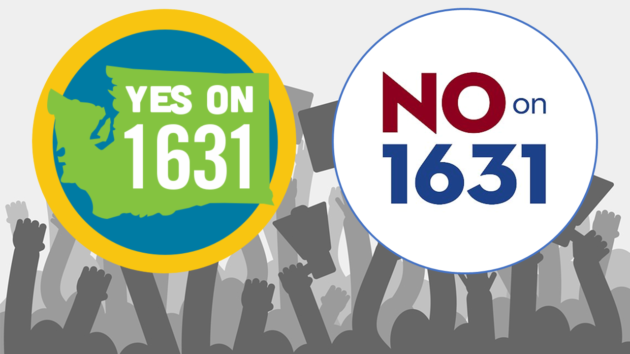 Initiative 1631 — the measure on Washington state’s Nov. 6 ballot to address climate change — is turning into an unexpected showdown between big oil and the Northwest’s tech sector.

On one side is a slate of international petroleum giants dominated by BP, Phillips 66 and Andeavor, which was previously known as Tesoro. That trio alone has contributed more than $25 million of the opposition’s nearly $30 million war chest — the largest amount ever raised for an initiative in the Evergreen State.

On the other is a coalition led by environmental organizations and individual supporters, dozens of whom have ties to the technology industry, from ultra-rich CEOs and entrepreneurs to rank-and-file software engineers from companies such as Amazon, Microsoft, Google, Tableau, Expedia and the gaming company Valve.

Many of the largest personal donations for I-1631 come from the tech sector, including $1 million from Microsoft’s Bill Gates, as well as Craig McKibben, co-founder of the software company WRQ, and his wife, Sarah Merner. Tableau co-founder and technical advisor Chris Stolte contributed $500,000. Nick Hanauer, a venture capitalist and early Amazon investor, gave $250,000.

Outside of Washington, Laurene Powell Jobs, widow of Apple co-founder Steve Jobs, gave $400,000 in favor of the campaign and Marc Benioff, CEO of Salesforce, donated $100,000. 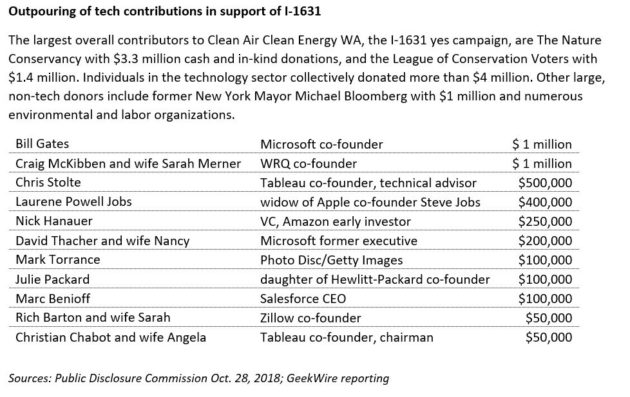 The measure is being watched carefully around the country as passage of I-1631 would mark the first time that voters anywhere elected to put a price on planet-warming carbon dioxide. Under the initiative, a fee on carbon would be collected from petroleum companies and utilities, bringing in $2.3 billion over the first five years of implementation. The money would be invested in clean energy technologies, with the aim of improving forest health and preventing wildfires and assisting communities most harmed by climate change.

Supporters of the measure have raised more than $14 million, with a roughly 50-50 split between individual donors and organizations including nonprofits and businesses. More than half of funds collected from individuals come from people linked to technology and engineering.

Perhaps it shouldn’t be a surprise that some tech leaders would rally in favor of I-1631. Many in the sector tout technology as a solution to some of the world’s greatest challenges, and plenty of people — Gates among them — believe that climate change is one of the planet’s most urgent and daunting threats. The fee is intended to accelerate those solutions, boosting the growth and expansion of businesses tackling energy efficiency and cleaner alternatives in transportation and power generation.

“Energy and clean energy isn’t an industry, it’s a collection of industries. There is every kind of technology that anyone can imagine,” said Aaron Goldfeder, co-founder and CEO of EnergySavvy, a Seattle-based software company that works with utilities to run more efficiently.

Energy and clean energy isn’t an industry, it’s a collection of industries. There is every kind of technology that anyone can imagine.

“There is an abundance of new technology right now that can be deployed,” said Goldfeder, who recently hosted a panel discussion in support of I-1631 held at EnergySavvy’s downtown offices.

A handful of tech companies have ponied up funds for the yes vote, most notably Microsoft, which donated $50,000. Earlier this month, Lucas Joppa, Microsoft’s chief environmental officer announced the move.

“I-1631 represents an important first step on carbon policy,” Joppa wrote in a blog post. “We believe it offers opportunity; an opportunity for businesses of all kinds to come together to find workable solutions that lower emissions while keeping our economy strong, for Washington state to take the lead on this important issue, and for citizens to take an active role in supporting the state’s clean energy economy and a better future.”

The No on 1631 campaign rejects those claims, calling the proposal an “unfair energy tax” and warning that the measure will raise gas and electricity prices and “have a negative impact on the state’s economy,” said Dana Bieber, spokeswoman for the committee leading the opposition.

The measure could harm some tech enterprises, she said. “A lot of technology companies, like other businesses, start as small businesses,” Bieber said, and that’s who they expect will face some of the greatest harm from the measure.

A price on carbon pollution

This isn’t the first time that Washington has attempted to put a price on carbon. Gov. Jay Inslee took a shot at it in 2014 and 2018, and voters defeated Initiative 732 two years ago. But other governments have succeeded: British Columbia approved a carbon tax in 2008 and California in 2013 launched a cap-and-trade program to reduce greenhouse gas emissions.

Washington is taking a slightly different approach with I-1631, and supporters have worked to build a broad coalition of support including labor, representatives of minority groups and tribal members. Here’s how it works: 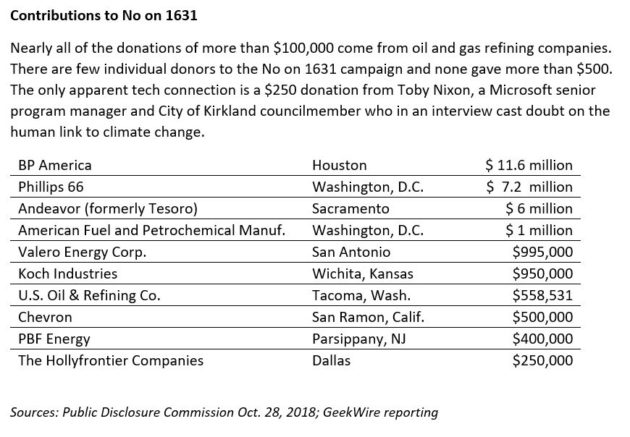 One of the bigger sticking points between the two sides is what the measure will cost residents and businesses in Washington.

The No on 1631 campaign predicts that the measure will cost the average Washington household an additional $440 a year in 2020, based on a study that they paid for from NERA Economic Consulting, an independent analysis company.

The structure of the initiative means “you put the costs and the burden on small businesses,” said Bieber.

The NERA report also concluded that the fee would not significantly reduce greenhouse gas levels — an assertion strongly contested by proponents.

The nonprofit Washington State Budget and Policy Center, which supports I-1631, estimates that the measure will cost households $159 more year in gas and electricity costs when first implemented. The estimate assumes that the petroleum companies will pass the entirety of the fee on to consumers.

Part of the challenge in making predictions about the effects of such a fee is the difficulty in accounting for the effects of climate change. The cost models here don’t consider the economic hit that communities face, for example, when wildfire smoke hammers a community’s tourism dollars.

“We can’t solve the global crisis, but we can take care of our state,” said Mo McBroom, director of government relations with The Nature Conservancy in Washington.

Believe it or not, there is one thing that both sides agree on.

“Climate change is a serious issue,” Bieber said, “and it deserves a serious response.”

I-1631 falls well short of the challenge, she said, though her campaign didn’t offer an alternative. “Our coalition came together for one reason and one reason only: to defeat this initiative.”

Others, given the urgency of the problem, are ready to take action.

“I’m hopeful that it passes and whatever works we keep, and whatever is broken we fix,” said Eric Berman, co-chair of E8, an Seattle organization of angel investors that was previously called Element 8. “Just as a signal to the country, it’s super important that you have a voter-approved price on carbon.”

E8 is focused on cleantech startups, but has not taken a position on the initiative.

Experts on clean energy and cleantech said they see potential for jobs and growth around the implementation of these planet-friendly solutions. That includes a wide variety of software to determine where electricity and water are being wasted, managing batteries and energy storage, getting better performance out of the power grid, and financial technology (fintech) to lower the cost of clean-power customer acquisition.

“These are total software plays, but they unlock the deployment,” Berman said.

Tim Woodward is a long-time venture capitalist in cleantech and managing director for San Francisco’s Prelude Ventures. His focus, too, is on getting the existing solutions out in the field.

“We don’t need massive technology improvements from what we have today in solar and wind,” Woodward said, citing how price-competitive these energy sources have become in many cases.

Washington is a pretty amazing place for innovation, and we’ve seen that decade after decade.

“We don’t need big breakthroughs in those technologies,” he said. “We need more capital to help in deployment, to help in risk reduction of projects that are on the margin (of affordability).”

“Washington is a pretty amazing place for innovation, and we’ve seen that decade after decade,” McBroom said.

“This policy is about innovation and the tech industry recognizes that better than anyone else,” she said, “and recognizes the opportunity for our economy and the importance of protecting this place.”