Because the emails were sent to users based on where they’ve ridden, not necessarily where they live, some users may have inadvertently gotten notifications about Ofo leaving cities where we may not be.

Ofo’s future in Seattle remains uncertain as the city considers new regulations that would change the bikesharing market.

Ofo, the Beijing-based dockless bikesharing giant, is shutting down operations in Seattle.

The company, which currently has thousands of bright yellow bicycles on Seattle streets, notified customers in the area that it is leaving the market. Riders in other cities around the country are likely seeing the same message. Last week, Ofo confirmed widespread layoffs across the U.S. to GeekWire.

“We’ve done some critical thinking about the markets we operate in, and how to deliver the best ofo experience possible to our riders,” the company said in the email. “That’s why it’s with great sadness that we’ll be leaving your town over the next week.”

Ofo will refund customers who have already paid for rides and passes in Seattle within 30 days. GeekWire contacted Ofo to comment on the departure. We will update this story when we hear back.

Seattle was one of the first cities to venture into dockless bikesharing, launching a pilot that allowed Ofo, Lime, and Spin to deploy bikes in the city over the past year. The pilot has come to an end and Seattle is considering a new set of regulations to govern the city’s permanent dockless bikeshare program. The Seattle Department of Transportation recommended the city adopt a $250,000 annual permit for bikeshare operators.

In March, Ofo raised a whopping $866 million funding round led by Alibaba, China’s rival to Amazon. Dockless bikesharing has become one of the most heavily venture-backed industries. Despite the fresh cash, Ofo is reportedly shutting down most of its U.S. operations.

Ofo sent the email below to Seattle customers: 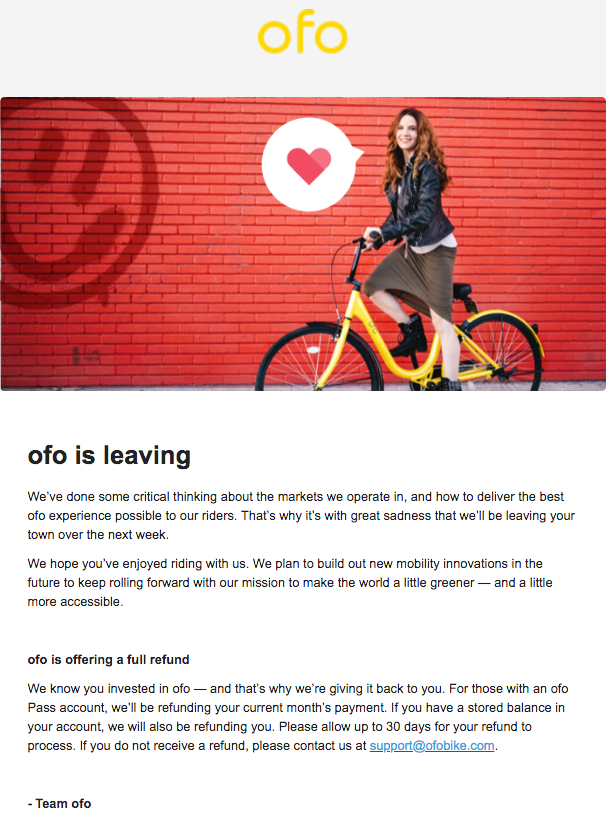