For the last twenty years, the Marvel vs. Capcom series has been (in)famous among fighting-game fans. It’s a franchise that pits an assortment of characters from Capcom’s various titles—Street Fighter, Resident Evil, Devil May Cry, Darkstalkers, etc.—against Marvel Comics’ stable of superheroes and – villains. Since 1996’s X-Men vs. Street Fighter, the series has been known for being flashy and chaotic, and most of the games tend to have serious balance problems in one way or another. Despite all of that, or maybe because of it, MvC’s fans are some of the most raucous and dedicated players out there.

Cerebrawl is, in many ways, a deliberate attempt to create a sort of spiritual, independent sequel to Marvel vs. Capcom. In fact, as of this writing, there’s an automatic redirect at marvelvscapcom5.com that brings you to Cerebrawl’s website. 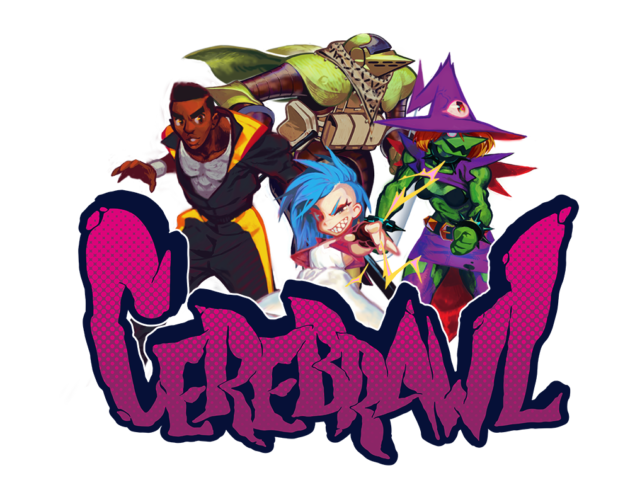 The game is an independent production by a six-person team, based in part in Seattle, that calls itself Zero Dimension. Its crew consists of veterans of companies such as Harmonix, Disney, Microsoft, the Indie Megabooth, and 38 Studios, and many of them are also long-time presences on various fighting games’ tournament scenes. Zero Dimension’s members have been working on Cerebrawl between other projects for the last three years, during which time they were regular sights on the Seattle indie games circuit. They’re currently working on funding the last big push to get their game finished.

The ideas was to “make a more Marvel-type game rather than a ‘gentleman’s game,’” says the game’s art director, Eliot Min. “I played a lot of Street Fighter 4 in tournaments when I lived in Massachusetts [and] there’s something about the Marvel scene… I’ve always been more attracted to that scene, rather than the game itself. I wanted to build that kind of scene. It’s sensory overload… it’s like a reflection of the game that they play.”

Cerebrawl’s producer, Aaron Oak, is a former “semi-pro” player with a background in Counterstrike and Starcraft. “The fighting-game community is very far apart from that. It’s way more exciting. In Starcraft, no emotion is shown… that was exciting to me as well, having that bright, vibrant community that’s really excited about what they do.”

I played Cerebrawl for a few rounds against Oak. It’s more frantic and fluid than a Street Fighter game, with big, screen-filling moves and animations, but doesn’t quite reach the explosive, technicolor heights of a Marvel vs. Capcom. In play, it looks like the game adaptation of some ‘90s independent comic or late-night cult cartoon that doesn’t actually exist; most of the characters would look perfectly at home as graffiti on a wall, or as decals you could buy at a skate shop.

You can play Cerebrawl as a typical head-to-head fighter, where both players select two characters and battle it out as a tag match, or as a four-player game, where each character is controlled by a separate player, with two fighting onscreen at a time. Much like Marvel vs. Capcom, a big part of Cerebrawl is off-screen assist moves, where an inactive character leaps in to help out the active one. Unlike MvC, however, if you’re playing with a teammate, that teammate can choose when to use his or her assist, or even tag in to get you out of a bind. (For fighting-game fans, think of the Burst Moves in Guilty Gear: it’s a limited-use, high-risk ability that’s designed to break you out of an opponent’s combo.) It’s a common sort of feature in a lot of wrestling video games, but it’s rare to see it in a tournament fighter.

It’s an ambitious project, particularly for an independent game running on relatively recent software, and it’s been on a slow boil for most of its production so far. At the start of this month, Zero Dimension launched a particularly ambitious Kickstarter in order to finally complete Cerebrawl.

“We have a team… of six,” says Oak, regarding Zero Dimension’s funding goal, “and all these people need to be taken care of. Even with the amount that we have, we’ve taken pay cuts in order to arrive at that number. Our combat designer, Wilson [Fermin], has to quit his job so that he can come work with us. …plus the licensing fees, plus the soundtrack, plus all that stuff added up to that number. We spent months getting to that number.”

“We were kind of in a pinch when we came up with that number,” adds Min. “We could go two routes. We could go the safe route, because we know that [game Kickstarters] usually aim for around 50K, but if we went that route we would have to come back for more funding before the game was… in a showable state. We decided—this is kind of hard to say—that if we were going to fail, we’d rather fail the Kickstarter rather than fail on delivery.”

In the event the Kickstarter fails, that doesn’t necessarily mean the end of Cerebrawl.

“It’s been a wild three years,” Min says. “We’ve been able to build up an incredible community, and with the Kickstarter happening, we’ve got all these new followers. We still want to be able to use that in some way. We have these people who would support us regardless of what happens, which is incredible. We’re still talking about it, but it’s a tough decision to make.”

Development on Cerebrawl continues as of this writing, with regular streams on the game’s Twitch channel.