For female entrepreneurs, trying to pitch investors and raise money can be a tough proposition in a technology industry where less than 3 percent of venture capital dollars went to all-women founding teams last year.

That’s partly why Seattle-area investors and the Female Founders Alliance helped host the first-ever “Meet the VCs” event on Thursday.

Top local female investors gathered in Seattle to participate in a panel discussion and later provided 1-on-1 feedback to female entrepreneurs from across the Pacific Northwest. The event was inspired by a similar idea that started in San Francisco this past winter.

The 11 panelists shared several pieces of advice for female entrepreneurs who want to raise money for their companies.

Julie Sandler, managing director at Pioneer Square Labs, said women need to be more “bombastic” in front of investors, particularly those at big funds. She said females often tend to say things like, “this is my first time at this,” or, “here’s what I don’t know yet.”

If you aren’t walking out of that room feeling like the most bombastic braggadocio version of yourself, you are not even close.

“If you aren’t walking out of that room feeling like the most bombastic braggadocio version of yourself, you are not even close,” Sandler said of advice she gives female founders. “And if you are, you’re only closer to what your male founders are conveying in that room.”

Heather Redman, managing director at Flying Fish Partners, encouraged female founders to find a male counterpart but to make sure they “be the face” of a company.

“Right now the reality is you will have an easier path and probably a more transformative path by partnering with men in founding your companies,” she said. “If you do that, be sure you are not in the back room. We see a lot of women taking care of all the hard stuff on the inside but not necessarily showing up in the press or speaking at conferences.”

Judy Loehr, formerly a venture partner at Cloud Apps Capital Partners, said women should do their homework on which firms to pitch.

“If they don’t have a single woman on their investing team and they haven’t actually invested in a woman, save your time,” she said.

The lack of diversity within VC firms is why more than 500 venture-backed entrepreneurs this month put their support behind Founders for Change, an initiative that launched out of the #MeToo movement and the numerous harassment stories from Silicon Valley over the past year. A 2016 survey conducted by the National Venture Capital Association and Deloitte found that 11 percent of VC firm investment partners were women. 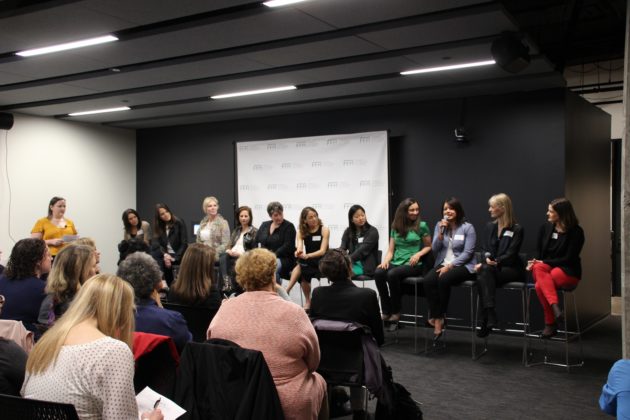 A majority of the advice shared on Thursday was useful for any entrepreneur, regardless of gender. For example, Sarah Imbach, a local angel investor, said if she doesn’t see signs of grit in a founder within 15 minutes, she’s not writing a check. Corey Schmid, a partner at Seven Peaks Ventures, said she thinks about how inspiring a founder is and whether or not she’d work for them.

Amy McCullough, managing director at Trilogy Equity Partners, said founders need to be prepared to talk about their business, inside and out.

“Be OK with putting the Powerpoint down and putting the script down, and go up to the whiteboard and talk about your business,” she explained. “Demonstrate that you understand it and have a very strong grasp about what’s going on. That cuts across male, female, whatever — be really confident in how you talk about your company.”

They echoed a lot of what was said at Thursday’s VC Office Hours event. Gonser said there are amazing female entrepreneurs who get afraid or discouraged when they are in a room with a majority men and it’s their first time pitching. “I would just say go for it … go at it harder,” he said.

Singh said “go at it with your full authentic person.”

“It makes no difference to me as an investor who the entrepreneur is,” said Singh, who previously co-founded Concur. “Is it a great idea? Do you believe in it? If those two things are checked, let’s go, let’s go make some money and build a great business.”

The panel agreed that increasing diversity at startups and investment firms is not only about gender. Imbach noted that there is data linking outsized returns and diverse teams. She said it’s important that companies, particularly within the leadership ranks, avoid having everyone think or sound the same.

“If you want to sell to people, whether it’s the longtail consumer or an enterprise, and you can’t get inside the mind of that customer because everybody at your table doesn’t look like or represent that customer, it is going to be harder for you than it is for someone who can actually do that,” Imbach said. “The companies I’m working with that take that seriously from the very beginning are able to recruit better and retain employees at a better rate, and they get to sales faster. That’s how you get good money.”

The same line of thinking can be applied to investment firms. Michelle Goldberg, a partner at Ignition Partners who spoke at Thursday’s Meet the VCs event, also spoke last week at a separate event about women and investing. Goldberg explained how investors are taught to invest in what they know and have experienced — and if investors at a VC firm aren’t diverse, it’s less likely that they’ll invest in entrepreneurs or companies they can’t relate to or aren’t familiar with.

“There is this narrow band thinking,” Goldberg said. “That’s why you just need more diversity in the room [and investors] who have their own set of things they know.”