The 2014 midterm election saw the lowest voter turnout in 70 years, with just 36.4 percent of eligible voters making it to the polls. As we approach another, arguably more consequential, midterm election in November, a handful of Seattle and Washington D.C. technologists have launched an app to encourage more people to vote.

VoteWithMe relies on a database of publicly available voting records and compares it to your contact list, with permission. The app then shows which friends are registered as a Democrat or Republican, or are unaffiliated, and which ones live in tight districts where their vote is especially impactful.

Armed with that information, users can send messages to their friends reminding them to vote. VoteWithMe suggests messages but ultimately leaves the final word up to the user. 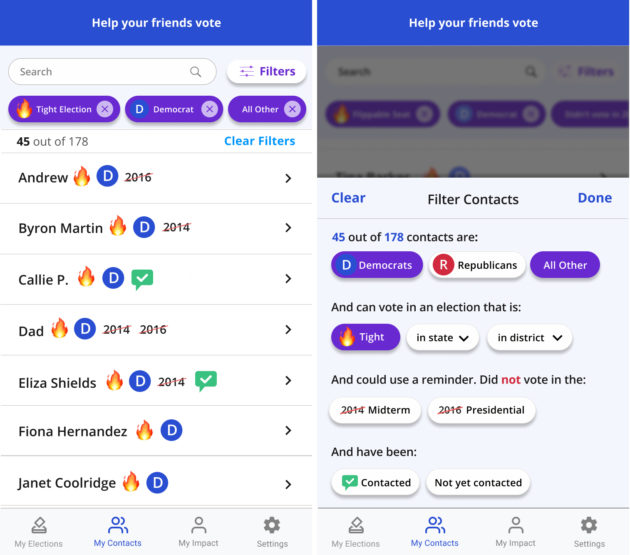 VoteWithMe’s origin story traces back to the Obama White House. A Google engineer by the name of Mikey Dickerson had been volunteering his skills for Barack Obama’s 2012 campaign. When Obama’s Healthcare.gov portal infamously crashed on launch day, the president called Dickerson to come to the rescue.

That was the beginning of the U.S. Digital Service, which helps other federal agencies improve and deploy software. Dickerson left the USDS in 2017, as did Kim Rachmeler, a former Amazon executive who had served as one of Dickerson’s lieutenants since 2015.

Back in Seattle, Rachmeler got a call from Dickerson. He was starting a nonprofit called the New Data Project. She agreed to lead the Seattle engineering team developing VoteWithMe.

“I think the three takeaways for VoteWithMe is it’s free, it’s easy and it works,” she said. “That’s really what you need to know. This is using public data and putting that power into the hands of individuals who feel very, very strongly that voting is important and that it is the way we are going to change the current political situation.”

There’s no shortage of voting and political apps cropping up as we near the midterms, but Will Friedman, co-founder of the New Data Project’s Seattle office, believes VoteWithMe is different. The app doesn’t require users to register with them or collect email addresses. It’s free of advertisements and doesn’t support donations.

“I think people are really excited to see this concept and we do believe it’s well executed and easy to use, which makes a difference,” he said.

Like Rachmeler, Friedman was inspired to get more politically engaged after the 2016 presidential election. A Microsoft vet, he was most recently president of Cozi, an app to keep families organized, before joining the New Data Project.

VoteWithMe has raised more than $1 million from donors, many of whom are in the technology industry. The app launched in early September in the Apple and Android stores.

Both Friedman and Rachmeler are currently working on VoteWithMe full-time. But that may change after the midterms, depending on whether or not the app is funded for the long-term.