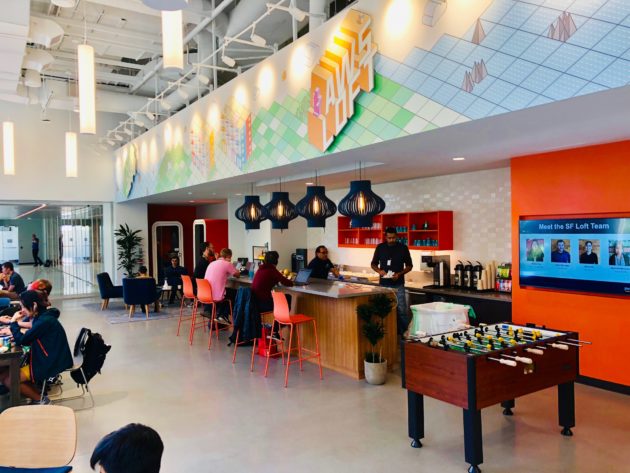 SAN FRANCISCO — The co-working space at 525 Market St. looks, at first glance, like many others in this city and other tech hubs.

Every weekday, startup founders and developers huddle around their laptops at open tables, take advantage of the free coffee and occasional snacks, make calls in sound-proof booths, sit in on workshops in a nearby classroom, and get advice from technical experts at a help desk. Tall windows fill the space with light, and upbeat music plays under the hum of conversation.

But the secret to entering this space isn’t a monthly membership fee. It’s an Amazon Web Services account. 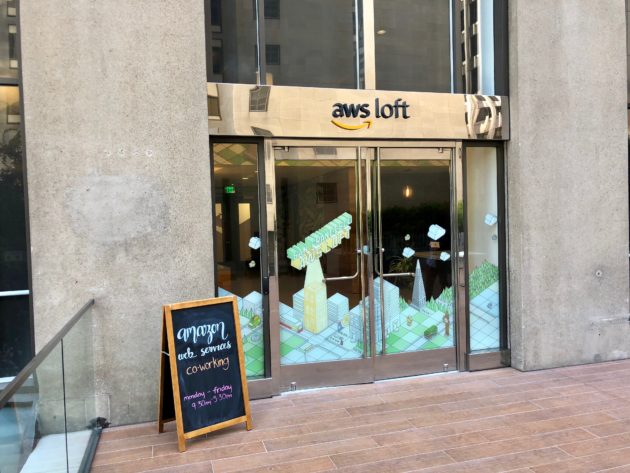 This is the AWS Loft in San Francisco, part of a growing network of physical locations where the public cloud leader connects with its customers. The spaces are free to use as long as you have an AWS account.

Just to the right of the check-in desk is a reminder of how big and influential this club has become. Giant magnetized logos for prominent AWS customers cover three walls, ranging from household names such as Hulu and Kickstarter to Seattle-area mainstays Convoy and OfferUp. 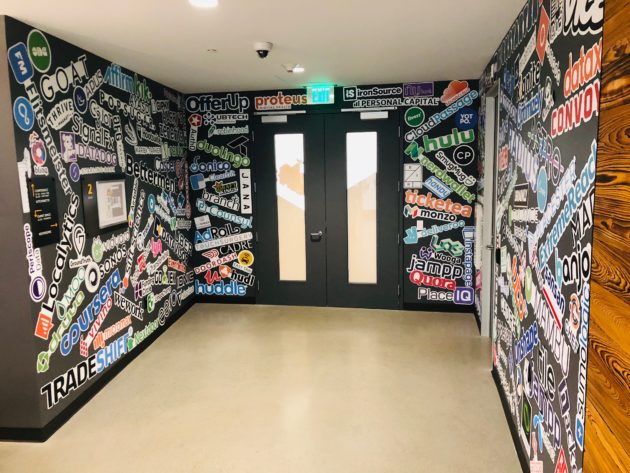 Amazon’s retail business has made headlines for bridging the divide between the virtual and physical worlds. Amazon operates a growing number of brick-and-mortar retail locations, including bookstores and grocery stores, and a new “Amazon 4-star” retail store that opened in New York City two weeks ago.

The company’s cloud business has quietly been making a similar move, on a smaller scale. After getting their start in temporary locations several years ago, AWS Lofts have evolved past their initial “pop-up” status with permanent locations in San Francisco and New York. Just last week, Amazon Web Services opened a new AWS Loft in Tokyo.

Although the physical retail and co-working initiatives are unrelated, they both reflect the Seattle tech giant’s realization of the importance of real-world connections.

“If you think about AWS, and think about cloud computing and servers, it’s all virtual,” said Adam FitzGerald, Amazon Web Services head of worldwide developer marketing. “But the truth is, when it comes to actual decision-making, and in particular when it comes to entrepreneurship, personal interaction really matters.”

AWS isn’t alone in this realization. Microsoft and Google, Amazon’s two biggest rivals in the public cloud, have also experimented with their own co-working spaces.

In addition to the three permanent AWS Loft locations, Amazon has operated temporary AWS Loft Pop-Ups in places such as Tel Aviv, London, Stockholm and other major cities around the world.

The AWS Lofts in New York and San Francisco started out in temporary locations before putting down roots in their current spots. Amazon’s 10,000-square-foot permanent AWS Loft in San Francisco opened this past spring.

Established locations offer a variety of advantages over pop-ups, such as separate, dedicated areas for public conversations and technical sessions without distracting people who want to keep working. For example, this is “Database Week” at the AWS Loft in San Francisco, with four days of sessions on a wide variety of cloud database topics. Amazon also equips the spaces for recording and distributing videos such as public discussions with startup founders and investors. 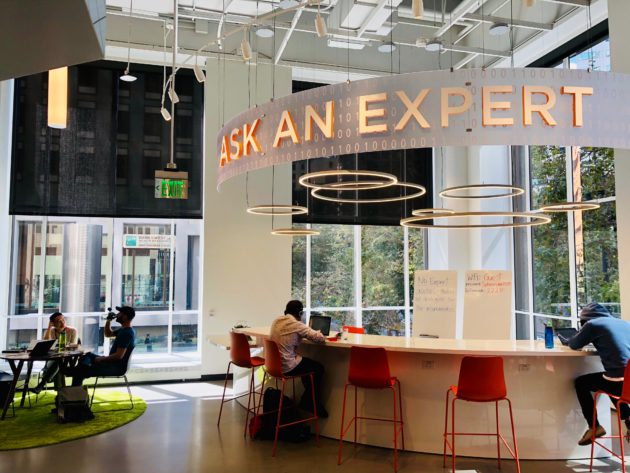 Amazon Web Services technical experts keep regular hours for walk-in appointments at the “Ask an Expert” desk, but when GeekWire visited the AWS Loft in San Francisco on a recent Friday afternoon, people from different companies and teams were engaged in conversations at a variety of tables.

FitzGerald described these connections as one of the major appeals of the space. “What we’ve found that customers like the most is that there are other customers just like them,” he said. “The more we can have all these things — not just the tactical advice, not just the business advice, but the ability for startups to share with one another — the more we can put those three things together, the more successful we think our customers will be, and that makes AWS successful.”

For a visitor from the Pacific Northwest, all of this leads to the natural question: Why isn’t there a permanent AWS Loft in Amazon’s hometown of Seattle?

There has been some discussion of the possibility but no concrete plans, FitzGerald said. After all, the entire town is pretty much an AWS Loft already.

“You could probably walk into your local Starbucks and run into an AWS person and get some good advice,” he said, only half-joking. “If you want a meeting with AWS in Seattle, I’m pretty sure we can make it happen.”