Amazon is tapping one of the world’s leading human-robot interaction experts to help manage a robotics operation that has become an integral part of the company’s fulfillment centers.

The Seattle tech giant has hired Siddhartha “Sidd” Srinivasa, a computer science professor at the University of Washington, as its director of robotics.

Srinivasa arrived in Seattle last year after moving his entire team of more than a dozen researchers from Carnegie Mellon University to the UW. He became the latest renowned technologist to join the top-ranked University of Washington computer science program, which will house Srinivasa’s team in its new building slated to open in January.

Srinivasa will split time between his new role at Amazon and the University of Washington. At Amazon, Srinivasa will work with Brad Porter, currently vice president and distinguished engineer of robotics.

GeekWire spoke with Srinivasa on Thursday evening after he gave a presentation on campus as part of an engineering lecture series. The self-described “full-stack roboticist” said working for Amazon wasn’t on his radar when making the move from Pittsburgh to Seattle.

“The UW and Amazon have had a long history of collaboration, and I’m really grateful to both organizations for letting me be a bridge between the science we are developing at the UW, and the applications of that science at Amazon,” Srinivasa said.

We’ve reached out to Amazon for comment and will update this story when we hear back. 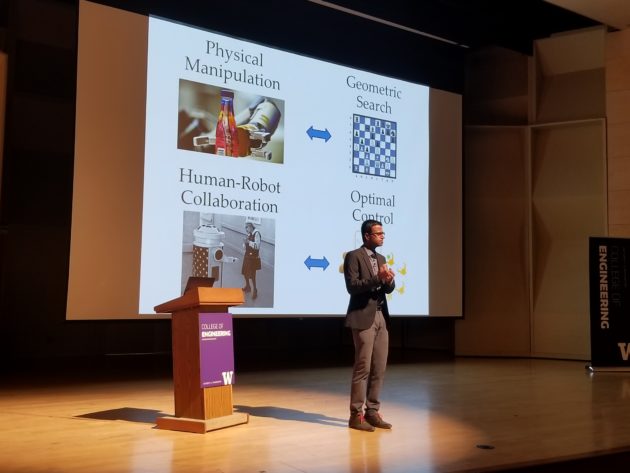 Srinivasa joins Amazon at a time when tech giants are increasingly looking to bring in professors from top universities to work on long-term research projects.

Ed Lazowska, a professor of computer science at the UW, said there are a number of other faculty also splitting time between the university and outside research institutions or tech companies.

“There are obviously some short-term stresses and strains on our end, but there are major long-term benefits, too: a stronger region, a stronger Amazon, and a stronger UW robotics effort,” he said of Srinivasa’s hiring at Amazon.

Lazowska said the challenge is to establish ground rules for these arrangements so that everyone benefits — the company, the individual, the university, and the region. He called it a “tragedy of commons,” in that the industry needs a vibrant university system, but individual companies want to recruit top researchers from schools.

“At one extreme, Microsoft has been an extraordinary partner of ours for decades — working to make us stronger in many ways, and being scrupulous about not raiding our faculty,” Lazowska said. “At the other extreme, one major company with a Seattle engineering office has attempted broad raids on our faculty, and on the faculty of at least one other computer science program.

“We need to create a playing field in which the principled companies don’t feel like chumps, and in which the universities and their regional companies can flourish together.”

Lazowska didn’t name the company, but Facebook has made headlines for hiring top AI and robotics professors, part of a so-called “talent drain” among top research institutions. The company insists that it views universities as partners rather than competitors to poach top talent from.

In March, GeekWire reported that Luke Zettlemoyer, a well-known computer science professor at the UW who was most recently a senior research manager at Seattle’s Allen Institute for Artificial Intelligence, was joining Facebook as part of its AI research lab in Seattle. Similar to Srinivasa, Zettlemoyer is working part-time as a UW professor while at Facebook.

Srinivasa previously founded the Personal Robotics Lab in 2005 at CMU, the world’s biggest robotics institute. His research specializes in robotic manipulation, or designing robots that can perform complex tasks in unpredictable scenarios, with and around people.

You may not recognize Srinivasa’s name but perhaps have seen his robots. He’s the mastermind behind HERB, short for the “Home Exploring Robot Butler,” which gained fame after successfully separating an Oreo cookie from the cream in 2013. HERB also appeared in an X-Files episode earlier this year.

Srinivasa’s algorithms have been used on the NASA Robonaut and the Mars rover; he’s also done work with Google, Intel, and DARPA.

Amazon made a big investment in robotics when it paid $775 million to acquire Massachusetts-based Kiva Systems in 2012. The deal helped Amazon infuse robotics and automation into its fulfillment centers, where employees work side-by-side with robots that do everything from sort packages to lift heavy 3,000-pound pallets 24 feet into the air. Amazon also created a subsidiary based in North Reading, Mass., called Amazon Robotics.

Srinivasa’s work at Amazon could extend beyond its 75 fulfillment centers across North America. Bloomberg reported in April that the company is working on a top-secret project to build robots for the home. The prototype robots “can navigate through homes like a self-driving car,” according to Bloomberg, which said Amazon may begin testing the robots in employees’ homes this year, with a possible public release in 2019.

I’ve always wanted to build robots that would actually help people, to actually go out in the world, to get robots out of factory floors and into people’s homes.

Srinivasa’s 45-minute presentation at the UW on Thursday painted a vision for how robots can interact with and help humans. His research at the UW aims to solve complex challenges that an in-home robot may face, such as rummaging through a crowded refrigerator to grasp a casserole dish, or feeding food to a human with an assistive arm.

“I always wanted to build robots that could actually help people, to actually go out and do things in the world, to get robots out of the factory floors and into people’s homes,” he said.

Humans should not fear robots, Srinivasa said. He envisions a future where humans and robots “treat each other as equals.”

“I want to build a robot that can act like a caregiver acts with a person,” he said.

Srinivasa made multiple references to Rosie, the robot maid in The Jetson’s. He said people sometimes forget that Rosie’s main role was to be a caregiver.

“We need to always think about the applications of our work and the social good that can come out of it,” he said.

After his presentation, an audience member asked about the biggest hurdle that is keeping consumers from buying a caregiver-like robot on Amazon.com.

“Working on it,” Srinivasa said, adding that “we don’t yet have human-level intelligence in our physical robots.”

Srinivasa, also a competitive runner and squash player, added that he misses Pittsburgh, but called the UW “fantastic.”

“The University of Washington has been amazing in the way they’ve received us,” he told GeekWire. “I’ve learned so much working in the School of Computer Science, and I’m looking forward to a lot more.”