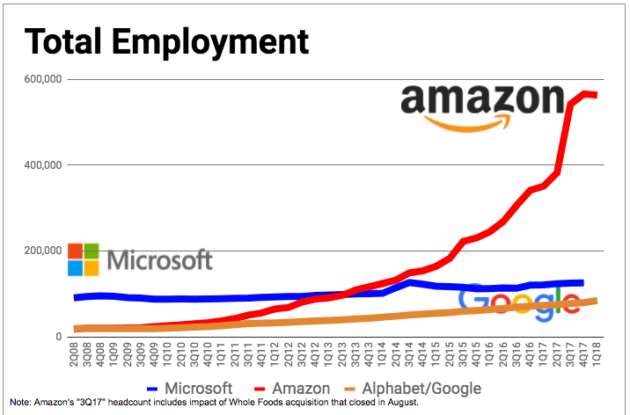 Amazon’s overall headcount declined by 2,900 people to 563,100 full- and part-time employees in the first quarter, according to new data released by the company as part of its earnings report Thursday.

It’s the company’s first sequential quarterly decline in employment since early 2009, and its largest employment decline on record, according to historical data compiled by GeekWire.

“We are certainly evaluating all hiring as we always do, but we continue to hire for the investment areas that we see, and a lot of software engineers in particular,” Olsavsky said.

Amazon cut hundreds of positions at its headquarters in Seattle in February.

“As part of our annual planning process, we are making headcount adjustments across the company – small reductions in a couple of places and aggressive hiring in many others,” the company said at the time of the cuts. “For affected employees, we work to find roles in the areas where we are hiring.”

Amazon released the new employment data today as part of a blockbuster earnings report, blowing away Wall Street’s expectations with earnings per share of $3.27 on revenue of $51 billion, up 43 percent year-over-year. We’ve contacted the company for comment on the numbers.

Employment at the company is still up significantly year-over-year, thanks to hiring and Amazon’s acquisition of Whole Foods Market. Amazon’s headcount a year ago was 351,000 people.