Fast-growing Amazon is cutting hundreds of staffers as the Seattle-based company makes adjustments in its core consumer retail business.

“As part of our annual planning process, we are making headcount adjustments across the company – small reductions in a couple of places and aggressive hiring in many others,” the company said in a statement provided to GeekWire. “For affected employees, we work to find roles in the areas where we are hiring.”

About 500 people are losing their jobs, though those impacted were offered other positions inside the company, a source tells GeekWire.

Citing several unnamed employees, The Seattle Times reports that the layoffs occurred due to the accelerated growth of the past few years, which resulted in a situation where some teams were over budget. It also reported that senior executives at Amazon were looking to reinforce the company’s leadership principle related to frugality, which has long been a tenet of Amazon.

Cutbacks are unusual for Amazon, which recently reported worldwide employee headcount of 566,000. That marked an addition of 24,100 people in the fourth quarter alone. Amazon employs more than 40,000 people in the Seattle area at its ever-expanding headquarters in the South Lake Union and Denny Triangle neighborhoods. It continues to hire aggressively in Seattle, with 4,044 job openings across various units. The company also committed to about one million square feet of new office space in Seattle in the past six months, including the Rainier Tower and Macy’s building. 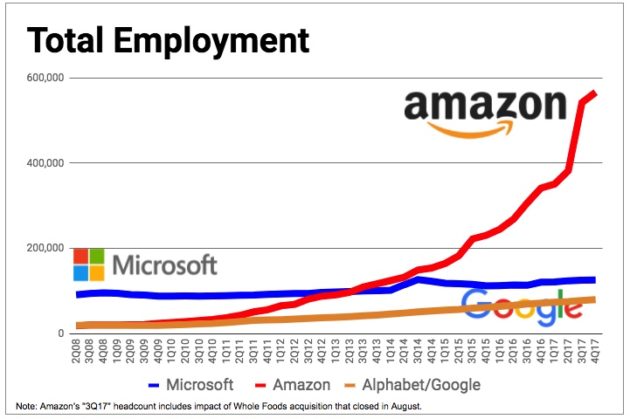 The cutbacks come as Amazon searches for a second North American corporate headquarters, dubbed HQ2, recently narrowing the field to a list of 20 remaining cities in the U.S. and Canada. The company has announced plans to cut other positions recently, including 58 jobs, mostly in customer service in South Carolina, at its self-publishing unit Createspace, as well as about 30 jobs at online shopping site Zappos.

Amazon is coming off one of its strongest holiday shopping periods ever, resulting in a robust earnings report on February 1. It posted $60.5 billion in net sales during the fourth quarter of 2017, resulting in profits of $1.9 billion. Its market value now stands at $667 billion, making it one of the most valuable companies on the planet. The stock is up Monday morning, trading up more than 3 percent at $1,386.