“Let’s shake Jeff Bezos down! We need housing in this town!”

“We are ready to fight! Housing is a human right!”

“Amazon, you can’t hide! We can see your greedy side!” 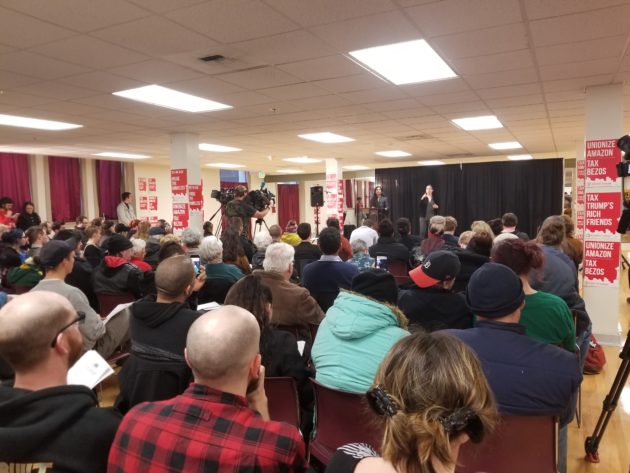 Emotions ran high inside the Langston Hughes Performing Arts Institute on Tuesday evening as leaders from the Seattle community voiced their support for a tax on the city’s largest companies to help provide $150 million annually for affordable housing and homeless services. 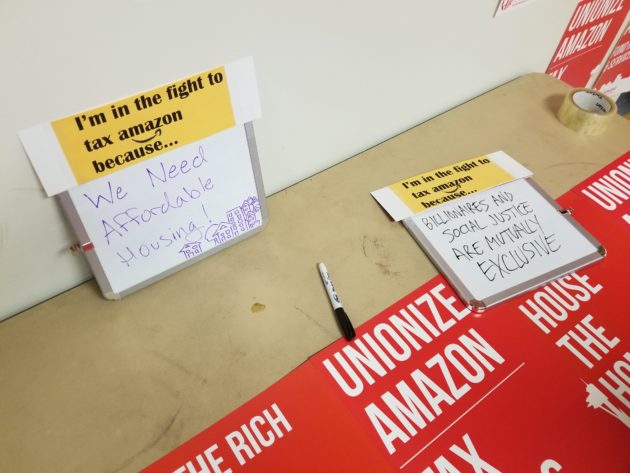 A proposal that would have taxed Seattle businesses earning more than $10 million in gross annual receipts was narrowly voted down by the City Council this past November.

But now the tax, also known as the employee-hours tax or “head tax,” is back on the table at City Hall after a task force earlier this month recommended that City Council pass a tax that would generate $75 million per year in funding — and as much as $150 million per year with additional “progressive revenue options” — to alleviate homelessness and housing issues in Seattle.

Sawant said the city is facing a “social crisis” with rising rent costs and a growing number of people who can’t afford a home. She said Seattle has “become a deeply unequal city.”

There are several huge corporations in Seattle, but Amazon and its CEO Jeff Bezos were clearly the target on Tuesday.

Sawant said the tax would allow the city to build 750 permanently affordable, high quality homes every year. She also said the head tax would affect the top 5-to-10 percent of companies in Seattle.

“That means not small businesses, but the Amazon’s, the Facebook’s, the Macy’s, the Nordstrom’s — all the companies that are not suffering in any way and can easily, easily afford to pay a small portion of their profits so that we could build affordable homes for everyone.”

In an editorial in The Stranger, Sawant wrote that the tax “would also set an inspiring national example, at a time when Trump is brutally attacking public services, and after his recent ‘tax reform’ bill carried out one of the biggest acts of corporate robbery in decades.”

Others who spoke at the event on Tuesday included people from the Democratic Socialists of America; Socialist Alternative; NAACP; Real Change; a University of Washington grad student; a coffee shop owner; and others. 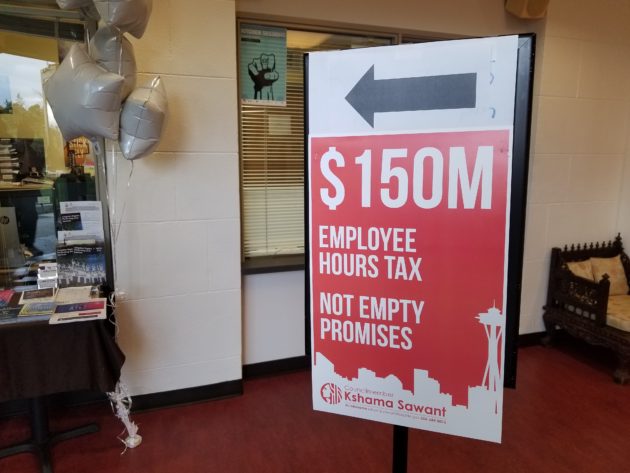 The head tax that was defeated in December would have collected about $125 per employee, per year from the city’s top-grossing businesses. The Council said approximately 1,100 companies would have been subject to the tax. It would have generated between $20-$25 million per year.

Some members of the Seattle business community have pushed back on the employee-hours tax. More than 180 business leaders wrote a letter to the Council on Tuesday, asking lawmakers to reject the new $150 million tax proposal.

Last winter, the Seattle Metropolitan Chamber of Commerce mobilized its members to write letters to the Council questioning its methods for fighting homelessness. Ninety-one business leaders, organized by the Downtown Seattle Association, also sent a letter to the Council arguing that the tax is not an appropriate solution to the city’s homelessness crisis.

Documentary filmmaker and Seattle resident Christopher Rufo has penned editorials in the Seattle Times and Crosscut this month in opposition of additional taxes. Here’s what he told GeekWire this week:

“Amazon is the most innovative company in the world and has created 40,000 high-wage jobs in Seattle. They’ve done far more good for our city than our incompetent City Council.

Sadly, instead of learning from the HQ2 debacle, Councilwoman Sawant and her cronies seem intent on chasing the entire company out of town. It seems they would prefer to turn South Lake Union back into blight and send Amazon’s tech workers into city-funded homeless encampments.

The reality is that we already spend $1 billion a year on homelessness in Seattle, but have seen no improvement over the past decade. But instead of taking responsibility for their failures, our City Council simply looks for another scapegoat and asks taxpayers for more money.

Don’t be fooled: we don’t have a funding problem in Seattle, we have a leadership problem. It’s time we send Comrade Sawant and her socialist cronies packing.”

The council is expected to discuss the new head tax proposal at Wednesday’s council meeting. A vote could come as soon as May. Sawant and the Affordable Housing Alliance plan to organize a protest at Amazon’s Spheres on April 10 at 5:30 p.m.