RealSelf has raised its first substantial round of outside capital to bring the cosmetic treatment review hub to users around the globe.

The Seattle-based company today announced a $40 million round led by Elephant, a venture capital firm led by Warby Parker co-founder Andy Hunt, who will join the RealSelf board. Capital World Investors, a subsidiary of Capital Research and Management Company, also participated.

RealSelf raised a small seed round when it first started more than a decade ago but has otherwise bootstrapped, building a Yelp-like marketplace business that helps people learn more about cosmetic procedures.

But with the opportunity to grow the company’s presence internationally — 40 percent of traffic to RealSelf comes from outside the U.S. — the time was right to take investment and accelerate growth, said RealSelf CEO Tom Seery.

“We didn’t need to go raise money — and that’s the best time to raise money, actually,” Seery said. “We had product market fit long ago, but now it’s time to really expand.”

RealSelf has more than two million reviews and 20,000 registered doctors on its platform, which helps users learn about procedures like botox, Invisalign, or breast implants. Last year, 94 million people from 100 countries used RealSelf; it averages 10 million unique visitors per month.

“We’ve watched the market evolve from a time where people discussed treatments options in guarded whispers to a world where just about everything is shared on social media,” Rich Barton, an early RealSelf investor and co-founder of companies like Expedia and Zillow, said in a statement. “RealSelf was ahead of the curve in building a marketplace for aesthetics before the category went mainstream. Tom and team have built an incredible business by bootstrapping on a tiny amount of seed capital, and this Elephant-led financing enables us to hit the gas.”

Seery, a former Expedia executive, said the company has seen more and more people paying for minimally invasive, non-surgical treatments. RealSelf originally focused on plastic surgeries, but the rise of botox, fillers, lasers, micro-needling, and other non-surgical procedures has increased the value of the company’s platform, Seery said.

“Consumers want to be really informed and educated,” Seery said. “We offer authentic stories, reviews, insights from experts that they can’t get elsewhere easily.” 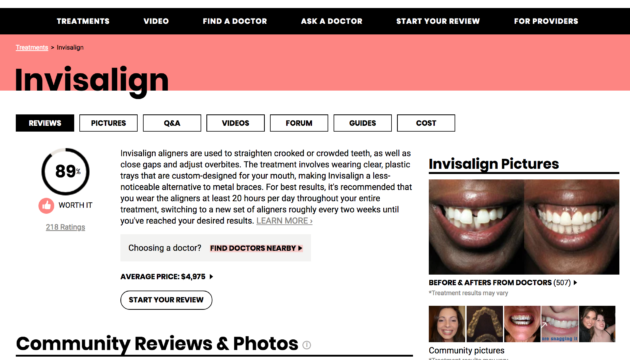 RealSelf makes money by charging doctors for targeted exposure, much like a subscription ad product used by companies like Zillow and Avvo.

“We’ve been increasingly focused on a model that helps doctors and clinics get a really great ROI from our platform,” Seery added. “We can do that by helping them increase their relevance to consumers by being more transparent.”

Seery said RealSelf doesn’t have much direct competition, but rather a lot of “companies that have elements of what we do,” from Yelp to Google to Instagram. There is a similar platform in China called SoYoung, which just raised a $60 million round this past January.

“This is not a transaction,” Seery noted. “This is a decision people make in an emotional and thoughtful way. We have resonance with people in a way that’s deeply impactful and important to them.”

With the new funding, RealSelf plans to develop localized versions of its site to more countries worldwide. A majority of people using RealSelf are women, though one-third of its traffic comes from men.

RealSelf plans to grow its employee count to as many as 300 people by the end of 2018. It expanded to a new Seattle headquarters in 2016 and is adding another floor to make room for more employees. It hired its first new chief marketing officer, former Amazon executive Tanja Omeze, earlier this month.

“Historically, we have invested in companies that provide consumers with transparency in complex markets,” Hunt, founder and general partner at Elephant, said in a statement. “RealSelf has built the leading platform allowing consumers to find detailed information, share stories and make better, safer decisions about extremely personal aesthetics choices.”