It was only a matter of time before Amazon’s controversial search for a second North American headquarters made its way into John Oliver’s crosshairs.

The comedian targeted Amazon’s HQ2 contest on this week’s “Last Week Tonight” for seeking government incentives — “as they mentioned in their instructions 21 times” — in a segment on economic development programs. In September, Amazon released a request for proposals listing instructions for cities to apply for HQ2 and a list of preferences for the location.

“A stable and business-friendly environment and tax structure will be high-priority considerations for the Project,” the RFP says. “Incentives offered by the state/province and local communities to offset initial capital outlay and ongoing operational costs will be significant factors in the decision-making process.”

Oliver couldn’t resist a few swipes at all of the wacky publicity stunts cities have pulled to get Amazon’s attention, including Stonecrest, Ga. which offered to create the “City of Amazon.”

“To compete, I’m surprised Omaha, Nebraska didn’t offer to let Jeff Bezos kill any three people he likes because you know he would,” Oliver said, artfully employing the infamous Buff Bezos photo from the summer. “Look at him. He wants it so bad. It’s the only thing he can’t have and he wants it.” 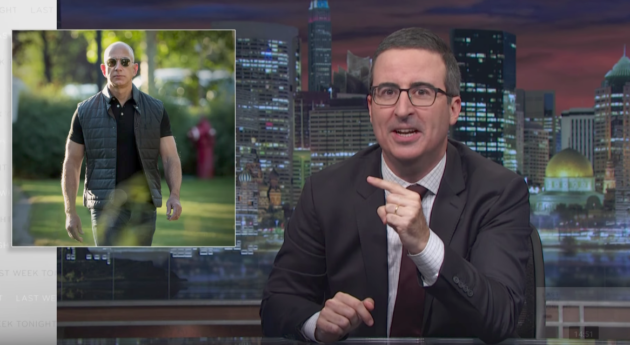 But “those stunts are just window dressing,” Oliver says, noting that incentives are much more likely to get Amazon’s attention. Take New Jersey, where local officials are offering up to $7 billion in tax credits if they land HQ2.

“That could mean billions of tax dollars that would not be collected for things like roads or schools or hospitals and Amazon already has more money than it knows what to do with,” Oliver said. “How else would you explain the existence of Goliath, a show that — and this is true — literally nobody has ever seen? Nobody. No human. No animal. Nobody.”

Oliver isn’t the first to criticize Amazon for publicly seeking incentives. The preference has been called “disgusting” and a “race to the bottom” by leaders in the company’s backyard and across the country.

But — all jokes aside — Oliver shifts the responsibility from corporations to local governments, who he says should demand more accountability when offering tax breaks.

“It’s pretty clear that economic development needs to be done in a much smarter way and I don’t fully blame the companies for this because if governments are going to offer ridiculous incentives, they are going to take them,” he said. “So governments need to hold themselves and companies more accountable and if companies aren’t producing what they promised, we need a system to claw our money back. “