President Trump is targeting Amazon again, tweeting this morning that the U.S. Postal Service should be charging the e-commerce giant and other companies significantly more to deliver packages.

Why is the United States Post Office, which is losing many billions of dollars a year, while charging Amazon and others so little to deliver their packages, making Amazon richer and the Post Office dumber and poorer? Should be charging MUCH MORE!

The U.S. Postal Service reported revenues of $69.6 billion in fiscal 2017, down $1.8 billion, due largely to decreases in first-class and marketing mail. USPS said package volumes were actually up 11.4 percent for the year, making Amazon shipments a rare area of growth for the USPS.

“The growth in our Shipping and Packages business provided some help to the financial picture of the Postal Service,” the USPS said in its year-end report, noting that shipping and packaging revenue was up $2.1 billion, or 11.8 percent, for the 2017 fiscal year.

Overall, the USPS reported a net loss of $2.7 billion for fiscal 2017, but that was an improvement over the agency’s net loss of $5.8 billion the prior year. 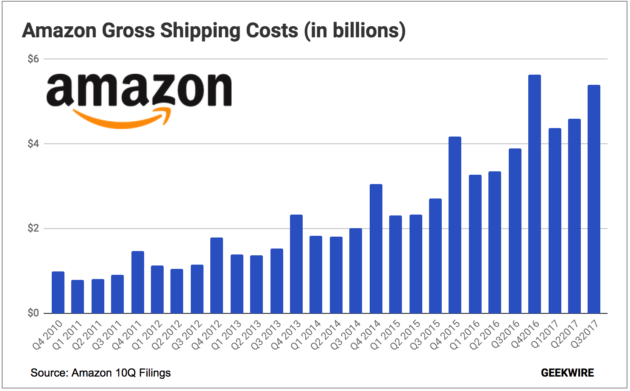 Amazon reported more than $14 billion in gross shipping costs in the first nine months of this year, across a variety of carriers — including the USPS, UPS, FedEx and its own shipping operations.

I was an Amazon delivery driver: What it’s like to work in the tech giant’s citizen package brigade

The company appeared poised to spend a record $7 billion on shipping, at least, during the peak holiday season. Its financial results for the holiday quarter won’t be made public until its earnings report next month.

Amazon offsets its gross shipping costs by charging customers for shipping, either directly when they order, or indirectly through the annual Prime membership fee. The company also charges third-party sellers that use its Fulfillment By Amazon (FBA) program, further offsetting its overall shipping costs.

This is the latest in a series of attacks by Trump against Amazon and its CEO Jeff Bezos — who separately owns The Washington Post — signaling that the company is still in the president’s crosshairs as his first year in office comes to a close. We’ve contacted Amazon for comment.

PREVIOUSLY: Trump and tech: Collisions, cooperation, and consequences in the first full year of his presidency