One of the biggest shifts in American music and culture, and arguably in a city’s identity, happened in Seattle before the internet and before social media, before camera phones and Amazon.

The grunge era that washed over the Pacific Northwest caught a number of noteworthy personalities in its wake. Photographer Charles Peterson was one of them, as he spent the better part of the 1980s and 90s documenting the rise of rock icons including Nirvana, Pearl Jam, Soundgarden, Mudhoney and many more.

And now, 30 years after making a name by shooting concerts on film and developing prints to tell the emerging story of the Seattle sound, Peterson has caught up to a slice of the digital experience that grips so many of us. Seven years after Instagram launched to eventually become the go-to photo-sharing platform, Peterson signed on last week, sharing some of his classic images and his vision of everyday life.

“Yep, I’m that guy, the famous grunge photographer,” his bio reads. “Now a modern dad working from a Seattle home basement with a beautiful family.”

Married since 2008, the 53-year-old Peterson is a father to two kids, Felix, 8, and Leica, 5 (yes, like the German camera maker). Fifteen posts and 700 followers into the Instagram experience, his feed looks like what you’d expect from an art photographer feeling his way around a new mode for revealing his “eye.”

With more than 4,100 friends on Facebook and a website dedicated to his work, it’s not like Peterson is dipping his toes in online waters for the first time. But it was hard to imagine, with its 800 million monthly users, that up until now Instagram could be cruising along without a photographer who has so much to show off.

I’m old school. The digital transition was somewhat difficult for me at first.

“I’m old school. I come from the dark room days,” Peterson told GeekWire. “You know, the digital transition was somewhat difficult for me at first. And the early digital technology paled compared to film, what you could still do with film.”

Picture, for example, Peterson’s life in 1994, when Nirvana frontman Kurt Cobain died. He didn’t have digital images or the ability to email them. There was no web archive for publishers to select what they wanted to use.

“I didn’t have time to grieve for two days,” Peterson said. “My phone was ringing off the hook and I was going into the dark room making dozens of 8 1/2 x 11’s and sorting those all out — which should go to People? which should go to Entertainment Weekly? which should go to Alternative Press? — etc. etc. And sending those off, running to the FedEx office before they closed at 5.”

Peterson said that when everybody else eventually decided to spend thousands of dollars on Canon 1DX Mark II cameras, he went out and bought a high-end Imacon desktop scanner.

“That sort of changed my life in one aspect, to be able to start digitizing my archives and get out of the dark room, because the dark room was literally killing me, from the chemistry,” he said.

Peterson’s career and finances are tied almost 100 percent to the images he shot three decades ago. Through print sales and licensing he makes more than he can on “nickel and dime everyday stuff” as a photographer.

And taking a fresh look at the work, whether it’s through his digitization processes or social channels, has renewed his appreciation for it. With a couple of books behind him, another is in the early stages and will focus on what he calls “the grunge years.”

“I put a little time between me and the work. I went traveling and worked on some other personal projects,” Peterson said. “And then I came back to the work and I was like, ‘Holy shit, this is some good stuff.’ You know, every band wants to put that freshman record behind them but usually it’s the record that often stands the test of time more than some of the others.”

After so many years around bands and the scene he covered, the music analogy is clearly an easy one for Peterson to make. He ties it to changing Seattle, the rise of technology and how everything — including images — is consumed nowadays.

“This was the last great music scene before the age of the internet,” Peterson said of Seattle. “The internet — I hate to over-dramatize or anything — but it did kind of blow up that local scene kind of thing. If it’s good it’s suddenly global almost instantaneously. And I’m not saying there’s not bands locally working hard or out there still in their Ford Econolines, because you still have to do that work. But you’re not popping a mix tape in the mail anymore, or at least you shouldn’t be. It’s just a different way of consuming music, just as things like Instagram and whatnot are a different way of consuming imagery.”

It’s clear based on the comments on an image he posted of Pearl Jam’s 1992 “Drop in the Park” concert at Magnuson Park in Seattle (below), that his photographs are as much of a touchstone as the music they set out to capture.

“One of the greatest rock ‘n’ roll moments I ever witnessed,” said one user. “I got this print for Christmas from my husband, plus several others from you. Hands down THE BEST GIFT EVER!” said another.

Pearl Jam, Drop In the Park, Seattle 1992. Never published but recently scanned. A client requested a print. You should too.

Peterson said people kept bugging him about not being on Instagram, but he saw it as primarily a mobile platform. Being saddled with what he called a “crappy phone” that he didn’t use to take pictures, he figured why bother?

But a desktop upload program called Flume proved to be a deal changer, along with getting his archive and backup hard drive situation nailed down.

“I was like, ‘OK, I cleaned up that aspect of my digital life, now let’s keep narrowing down here,” Peterson said. And sure enough, he went ahead and got a great phone for mobile photography when he bought a used Google Pixel XL for $300.

But unlike seemingly everyone who takes pictures these days, reaching for the phone is not his first instinct.

“When you own a Leica M10 it’s like, ‘Jesus, just pick up the camera take a real picture,” Peterson said. “But there are definitely situations where I don’t have the camera and it picks up the slack. Before, I felt for the most part fumble-fingered with a camera phone. Where’s the shutter speed? Where are the nobs? And it was always a little too slow, kind of behind the beat. And I find [the Pixel] to be pretty accurate and fast.”

Like any good dad on Instagram, among the rare images of Eddie Vedder or Chris Cornell, there will be plenty of images of his kids.

But of course Peterson, who figures he’s shot 60,000 photographs of his children over the years, approaches that subject like anything he shoots professionally.

Instagram relies on the instantaneousness of imagery more, I think, than I’m used to, so I kind of have to find my way through it.

“The kids thing is funny,” he said. “There’s two types of kid photography I’m doing: there’s one where I’m sort of documenting their daily life, and that’s great for grandma and friends to see and what not. But I am working on a longer-term project — and I’ll try as I go through this to point this out on Instagram — with a working title ‘Child’s Play.'”

Peterson called these images more universal in their intention and message, shooting the kids from behind or keeping them smaller in the frame. He’s trying to use color and light to evoke an emotion in viewers about their own childhood. 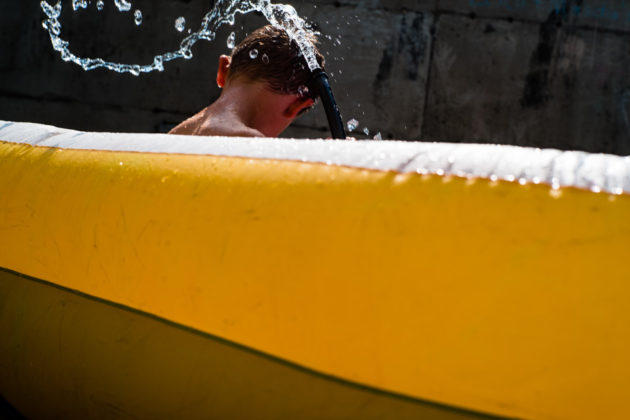 “You know how you’re walking down the street and you get, I don’t a know, a warm breeze or a whiff of something or just, the sunlight hits you and you’re like 5 years old again? That’s sort of what I’m trying to do with the photographs, because ultimately at the end of the day, who gives a flying F about your cool pictures of your kids, because every photographer has got cool pictures of their kids. I have to make it more than that and it’s been interesting to do.”

He’s got equally entertaining opinions about other mainstays of your Instagram feed and modern photography in general:

My favorite photo of 2017. Leica with Cowboy, San Juan Island, WA September 2017. Leica has taken riding lessons with cowboy for the last couple of years whenever visiting her grandmother. It’s been great to see that trust build with an animal so much larger than her. #Leica #LeicaM10

Peterson preaches about the importance of holding some stuff back and being a good editor, not immediately sharing everything you shoot.

He believes the digital medium can be tied so directly to the passing of time and he likes to let images percolate to see how they might work in relation to other things he shoots.

“It just relies on the instantaneousness of imagery more, I think, than I’m used to, so I kind of have to find my way through it,” Peterson said of Instagram, before referencing his historic catalog and new ways to share it with a tech-savvy generation.

“I’m thinking about having a #TGIGF — Thank God It’s Grunge Friday — and just publishing something that no one’s seen before, whether it’s Nirvana or Love Battery or whatever. Just sort of keep that interest going there, especially as I edit the book and I dig up stuff.”