President Donald Trump plans to sign a series of executive orders today aimed at cracking down on abuse of the work visa program that tech companies rely on to hire talent from overseas.

The legislation, titled “Buy American, Hire American,” asks for a “full legal review and analysis” from the Departments of Labor, Justice, Homeland Security and State. The president is asking those agencies to suggest policies to reduce fraud and abuse of the H-1B visa. Once the federal government has that information, it’s possible that the program itself could be altered. The Trump administration also said that administrative changes to how the visas are allocated could be forthcoming.

In a press briefing, senior White House officials said that the review could lead to axing the lottery based system that doles out 85,000 H-1B visas a year in favor of a merit-based system that would give priority to the highest-paid or most educated applicants.

Lola Zakharova, an immigration attorney who counsels corporations on H-1B visas, believes the Trump administration isn’t telling the whole story about the process.

“Being randomly selected in the lottery does not guarantee that an H-1B status will be approved … Once selected in the lottery, the petition must undergo a close scrutiny by the USCIS adjudicator on the merits, ensuring that the petition is for a ‘specialty occupation,’ that is that it requires theoretical and practical application of a body of highly specialized knowledge, which requires the attainment of Bachelor’s degree or higher in a specific specialty, she said. “So rigorous merit-based system is already in place.”

The review may also lead to administrative changes, like increasing fees for processing applications or adjusting the salary requirements of applicants.

“The Hire American rules that govern many of our visa and guest worker policies have gone unenforced or have been abused to the point of rendered, in some cases, even inoperative,” said a White House official during the briefing.

The Trump administration claims that 80 percent of people working in the U.S. on H-1B visas are paid less than the median wage in their fields. The review is targeted at what officials call “outsourcing firms,” that is companies that flood the H-1B lottery system with as many applications as possible, bringing in a higher percentage of workers and contracting their services out to other companies.

“The result of that is that workers are often brought in well below market rates to replace American workers, again, sort of violating the principle of the program, which is supposed to be a means for bringing in skilled labor, and instead you’re bringing in a lot of times workers who are actually less skilled and lower paid than the workers that they’re replacing,” an official said.

But those firms, several of which officials mentioned by name, aren’t the only organizations that rely on the H-1B. Redmond, Wash.-based software giant Microsoft is one of the largest filers of H-1B visa applications and other tech giants like Google, Facebook, and IBM also use the program to bring in large numbers of workers. 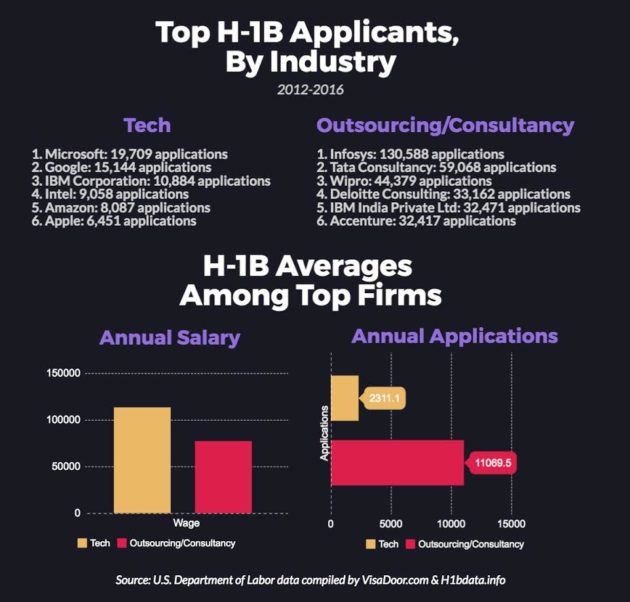 “The premise of the ‘review’ is that H-1B visas are allegedly being abused by staffing firms who use it to outsource jobs to cheaper labor and away from Americans qualified to do those jobs,” said Michael Schutzler, CEO of the Washington Technology Industry Association. “There is some evidence that supports this claim, but it’s not how the tech industry operates. Microsoft and Amazon are by far the largest H-1B tech company employers and the rest of the smaller tech companies in total are only 8,000 people in Washington. Of the 250,000 working in our sector, that’s a small percent.”

Trump plans to sign the executive order — which also calls for stricter enforcement of rules requiring the federal government to buy American-made goods when possible — at the Snap-on tool company in Kenosha, Wis., today.