Seattle has become known as one of the top tech hubs in the country, but it was a company from the more traditional field of insurance that took down a competitive field full of tech companies big and small, and organizations from a variety of other industries, at the 2017 GeekWire Bash dodgeball tournament.

The striped-polo clad AHTers took down the Seattle-based real-time IT analytics company ExtraHop in a spirited 3-1 win in the best of five series in this year’s dodgeball tournament. ExtraHop had the crowd behind them at the CenturyLink-sponsored courts, but AHT’s comprehensive approach to the game paid dividends.

ExtraHop hyped its new machine learning product Addy on its matching T-shirts, and the team looked like a well-oiled machine throughout the day. In an interesting twist, ExtraHop jokingly pointed out that AHT is actually its benefits broker, so it will be interesting to see how Wednesday’s dodgeball duel will affect the two companies’ relationship going forward.

Both semifinal matchups — AHT versus location analytics company Placed and ExtraHop over Zillow — came down to the final game in a best-of-three series, and the last couple players. Zillow looked dominant from the jump, but a game ExtraHop squad overcame the real estate powerhouse in a matchup that got a little chippy toward the end and dashed the possibility of an all FIRE final.

Excitement moments took place throughout the more than three-hour tournament. The most anticipated matchup of the day came in the first round, when online real estate companies Zillow and Redfin faced off. Despite plenty of hype in the GeekWire office over the fortuitous matchup, Zillow made quick work of its rival, rolling to the second round after a victory in this real estate rumble.

In one of the biggest surprises of the night, defending champion Tune was taken out in the first round by BMW car share service ReachNow.

We almost had a cinderella moment, as team GeekWire (and friends from other teams) came this close to making the semi-finals. But the intrepid geeks — led by local superhero Captain GeekWire — fell short to Placed.

In a first round game between PicMonkey and SkyKick, the action was so intense that even the cage designed to protect the audience from getting pelted by wayward green fastballs couldn’t contain the players and was knocked down briefly.

Here is the full bracket from the tournament: 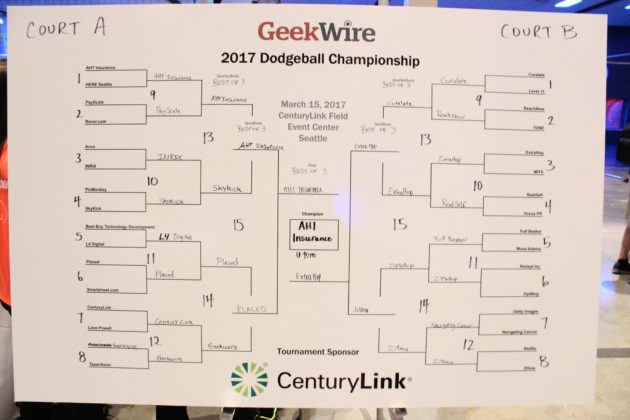