Don’t judge a fruit or vegetable by its cover.

That’s one of my takeaways after testing Imperfect Produce, a food delivery service that brings boxes of “ugly” fruits and veggies to your doorstep at up to 30-to-50 percent off grocery store prices.

The 2-year-old company takes misshapen produce that is typically thrown away from farms due to cosmetic defects and collects them at a warehouse, where it packages fruits and veggies into individual boxes and delivers them to customers in San Francisco, Los Angeles, Portland, and Seattle, where the service launched a few weeks ago.

Given my interest in food delivery, I gave Imperfect Produce a test run this week. For $21.99 ($17 plus a $5 delivery fee), I had about nine pounds of organic produce — ranging from chioggia beets to grapefruit — show up at my house on a rainy and windy evening in Seattle.

Here’s what I learned about this unique retail concept.

The potatoes were deformed; the pomegranates had scars; the red onions were considerably smaller than normal.

But the items in my box tasted totally fine. In fact, they were juicy, ripe, and pleasant to eat. 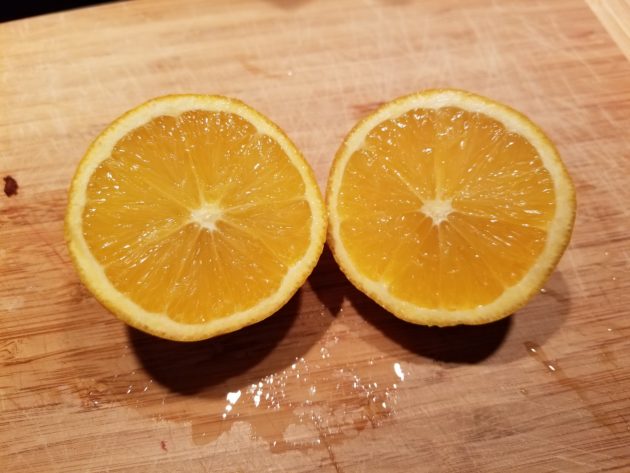 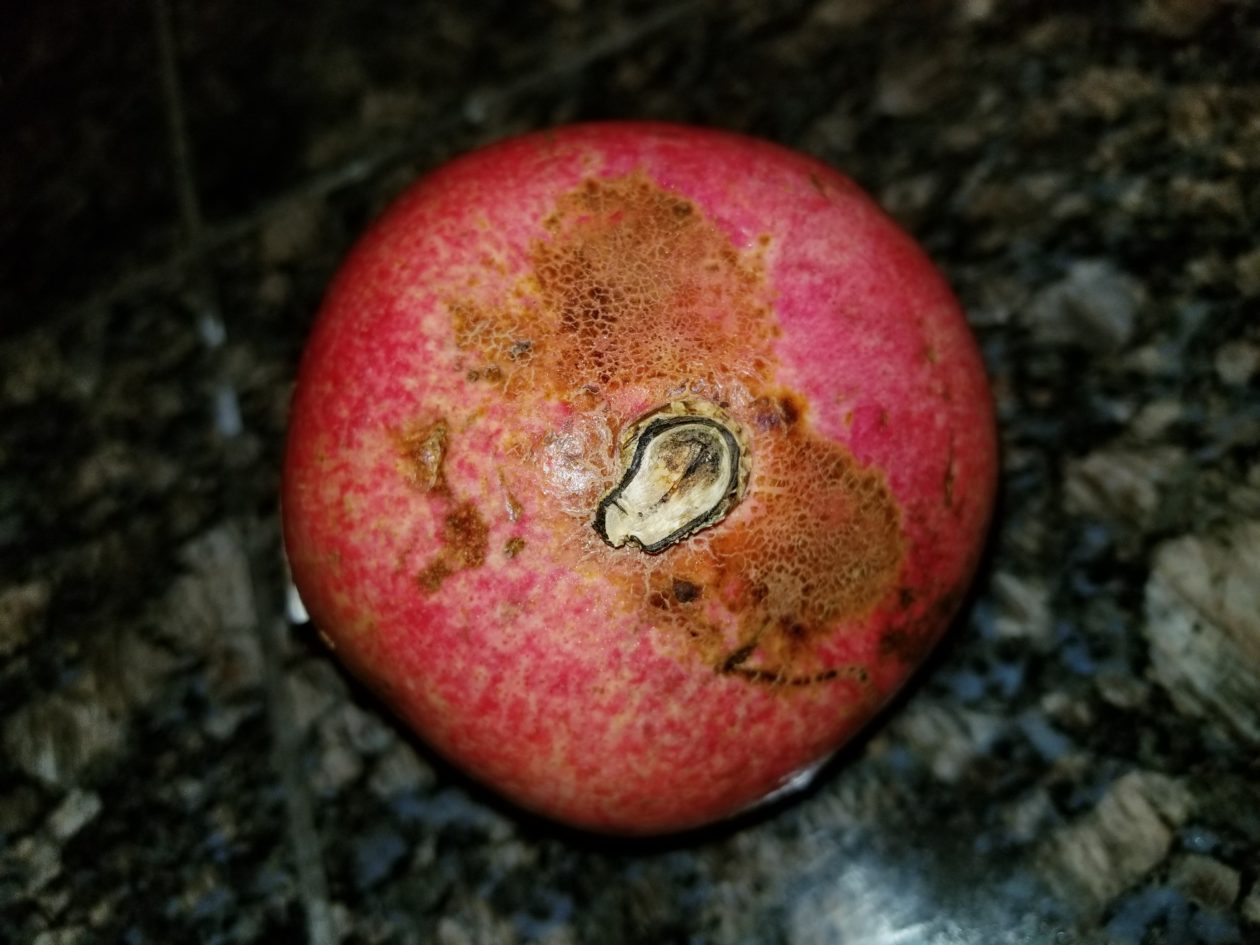 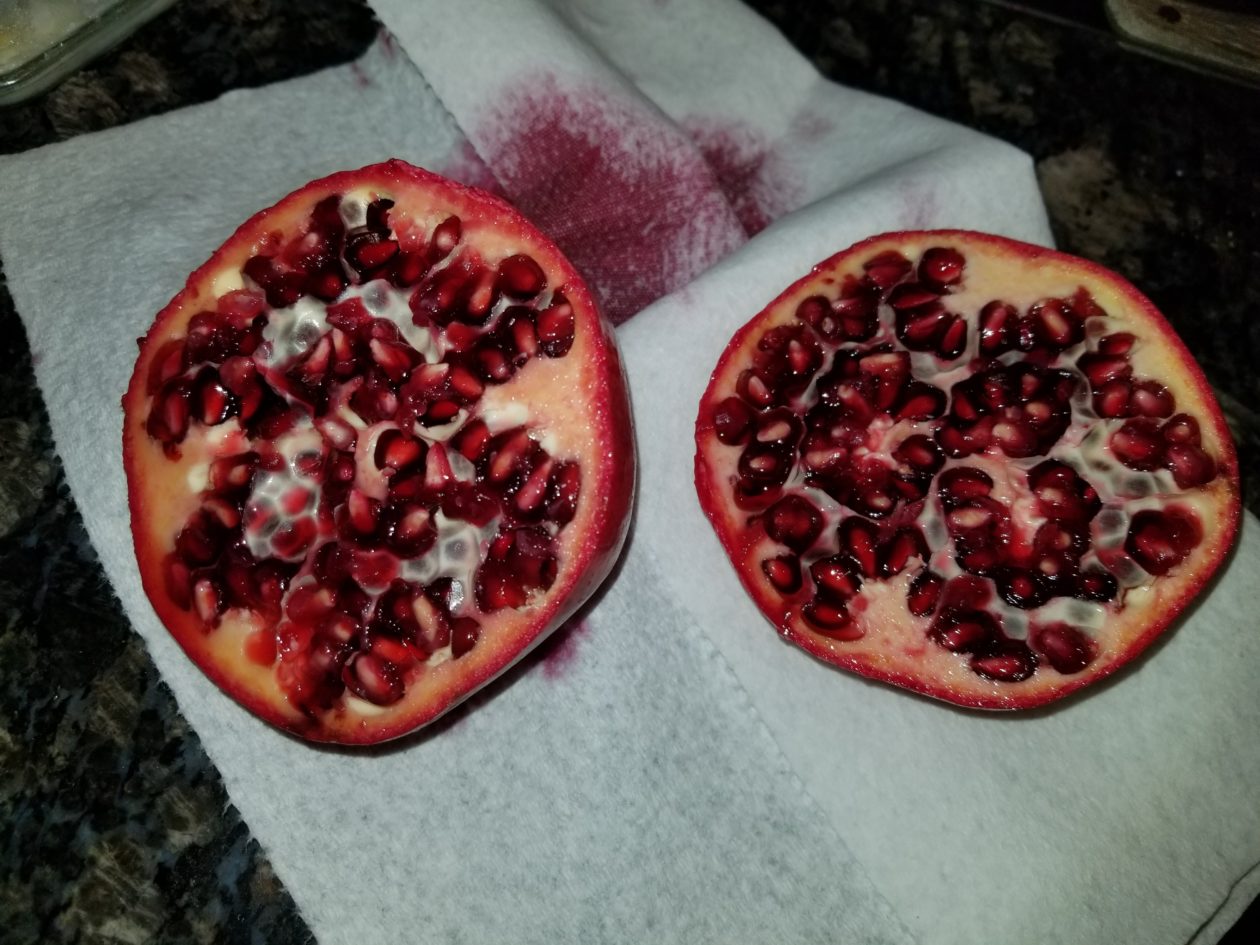 I probably wouldn’t pick out most of these items at the grocery store; choosing the best-looking produce is important for folks and is a reason why many still prefer to do their own shopping over relying on a delivery service like Instacart.

But the price discount that Imperfect Produce offers is a game changer. Given the choice of “pretty” but more expensive produce, or “ugly” but cheaper produce, going with the latter seems like a no-brainer — especially considering that it all tastes the same and provides identical nutritional value. 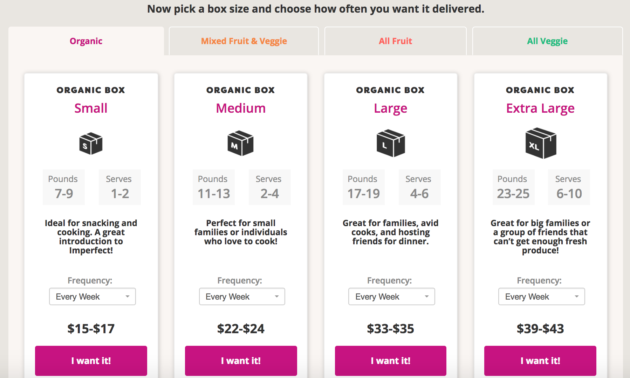 The Imperfect Produce ordering process was slick. Signing up was easy and the company does a good job of laying out the buying options.

Customers can pick from different sized boxes — small, medium, large, extra large — and type of produce (organic; mixed; all fruit; all veggie). Prices are based on a per-pound rate that varies slightly each week but stays within a tight range.

Imperfect delivers every Monday during given timeframes, depending on when you want the box to show up; customers can do once-a-week or bi-weekly deliveries and it’s easy to skip a week if needed. The system also lets you customize your box starting on Thursday the week prior. 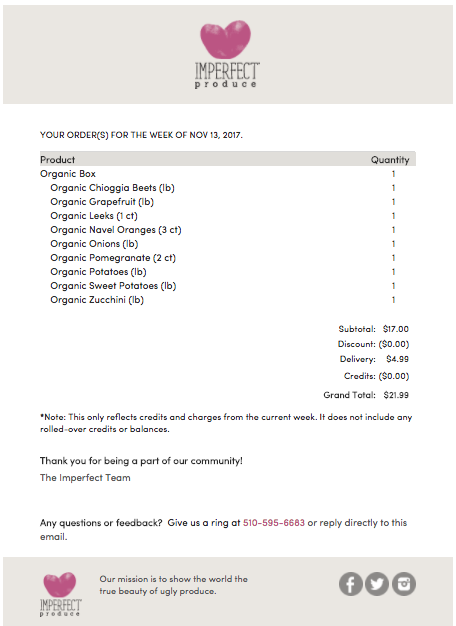 My total came out to $21.99 — $17 with a $4.99 delivery fee. I put together an identical order for Whole Foods in Seattle on Instacart in Seattle and it came out to around $30, which included a $5.99 delivery fee — about 30 percent more than Imperfect Produce in total. Three local services — Freggies, Full Circle, and Pacific Coast Harvest — sell comparable boxes for around $27-to-$30 as well. Imperfect Produce also offers discounted rates to those that qualify for CalFresh/SNAP/EBT benefits.

I set my delivery time for 6 p.m.-to-10 p.m. Just before 9 p.m. on Monday, I received a text message from Imperfect Produce notifying me that the driver was nearby with a link that let me track him — a nice touch. Minutes later, Will showed up at my house with the box. His roommate recently joined the Imperfect Produce team in Seattle and Will raved about the service, noting the quality of the produce and of course, the price. 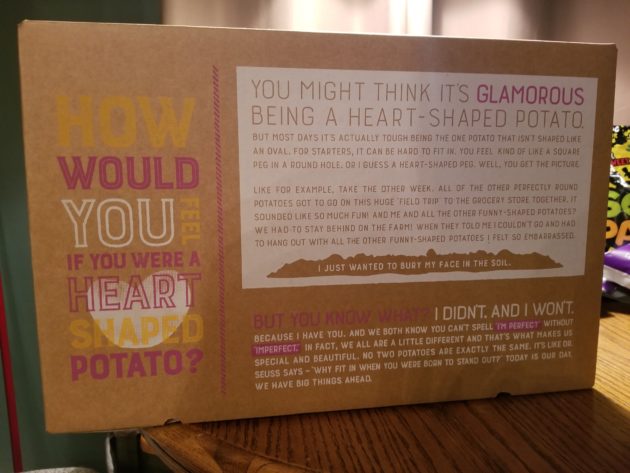 I caught up with Imperfect Produce CEO Ben Simon this week and asked why the company has seen early success; it will launch in Chicago next month with plans to service Sacramento and San Diego down the road.

Simon said the startup uses third-party services to help with inventory management and customer relationships, in addition to optimizing delivery (the company uses a combination of its own employees and independent contractors to get the boxes from its processing centers to homes). It would have been much more difficult to launch Imperfect Produce even five years ago, Simon said, but “the barriers to entry have largely disappeared.”

“We were able to launch this with a very minimal budget, which is pretty unique,” Simon noted.

A win-win for customers and farmers

Imperfect Produce, which has raised an undisclosed amount of venture funding, seems to have found a sustainable food delivery formula — it’s able to offer customers big discounts on fresh fruits and vegetables while creating a new revenue channel for farms. (Update: According to PitchBook data, the company’s investors include Shasta Ventures; Flybridge Capital Partners; Correlation Ventures; and Seattle-based consumer-only investment firm Maveron. Jason Stoffer, Maveron general partner, sits on the Imperfect Produce board, according to PitchBook)

Supermarkets and produce distributors don’t purchase the “ugly” produce, forcing farmers to either throw away the unsold fruits and vegetables or sell them at minimal costs for animal feeds.

The company is able to purchase the devalued “number one grade product” at a “huge discount,” Simon said. Farmers, in turn, are able to make money off items that they previously factored into their balance sheets as waste.

Imperfect Produce, headquartered in San Francisco, says that one in five fruits and vegetables “never make it off the farm due to tiny cosmetic defects that do not affect quality.” It sources produce mostly from West Coast farms.

“There’s a lot of room to play between what the farmers would get if Imperfect didn’t exist, and what they are [already] getting for their number-one grade product,” Simon explained. 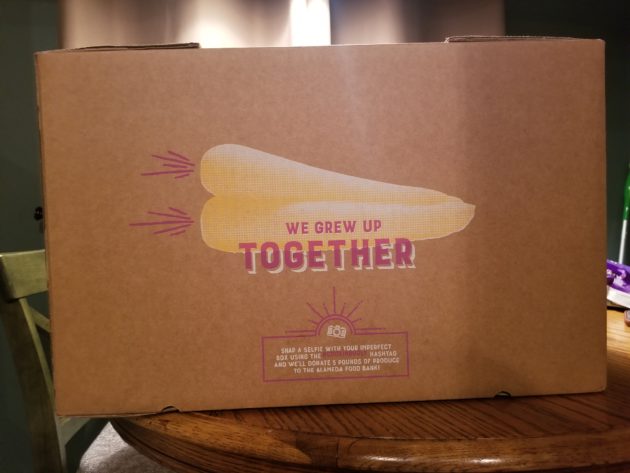 What makes Imperfect Produce even more unique is that it’s been able to grow quickly amid a flurry of other food delivery companies that have launched in recent years but struggled to build a profitable business around getting food to your door, whether it be ready-to-eat meals or groceries.

“There are a lot of startups out there that are charging a premium for convenience, and we managed to go at it with a different angle,” Simon noted. “It’s really resonating with people.”

The company’s roots go back to Simon’s days at the University of Maryland, where he founded the Food Recovery Network (FRN), a nonprofit helping reduce food waste on college campuses. He met Imperfect Produce co-founder Ben Chesler through FRN and the pair helped expand the organization to more than 180 schools across the country.

The pair later met Ron Clark, a food industry veteran who helped create the “Farm to Family” program at the California Association of Food Banks that sources 125 million pounds a year of “ugly” produce to California food banks.

Together they formed Imperfect Produce, with a goal of taking this model not just to California or college campuses, but to everybody around the globe.

“In the next year or so, we’ll get to prove to ourselves that this can be more than just a West Coast thing, that this is something people all over the country — and hopefully all over the world some day — can really get behind,” Simon said.

Imperfect Produce is not the only company around Seattle using technology to come up with innovative solutions in the food industry. Indoor farming startup Plenty, backed by investors like Jeff Bezos and SoftBank, is set to open a 100,000 square-foot farm in the region next year.