Sue Bird will set yet another record next weekend in Seattle.

The hoops legend will play in her 10th WNBA All Star Game on July 22 at Key Arena, tying Tamika Catchings for the most appearances in league history, and she’ll get to do it in the city where Bird has built one of the most impressive resumes in all of basketball.

Congrats @S10Bird on being named to your record-tying 10th WNBA All-Star game and 8th as a starter! #WatchMeWork pic.twitter.com/Hpbz3pt1JW

Bird, 36, joined us at our second annual GeekWire Sports Tech Summit last month in Seattle, where she talked about how technology and sports science has helped her compete at the highest level even 14 years after being selected as the No. 1 overall pick in the 2002 WNBA Draft.

Bird will start at the All Star Game for the first time since 2011. She leads the WNBA in assists with 6.8 per game.

“If it’s going to help you, if it’s going to elongate your career, you are an idiot if you don’t use it — why wouldn’t you use it?” Bird said of sports technology.

During her on stage interview with Q13 FOX reporter Aaron Levine, Bird described how she uses Whoop, a wearable band that tracks everything from stress to her workout to sleep. She’s only one of a few Storm players who uses a wearable device; many of her teammates don’t take advantage of the technology as heavily as she does. Bird hopes that changes soon — she wants some of the big innovations in data that are driving more conversations and interest in the NBA and men’s basketball to make their way to the women’s game. 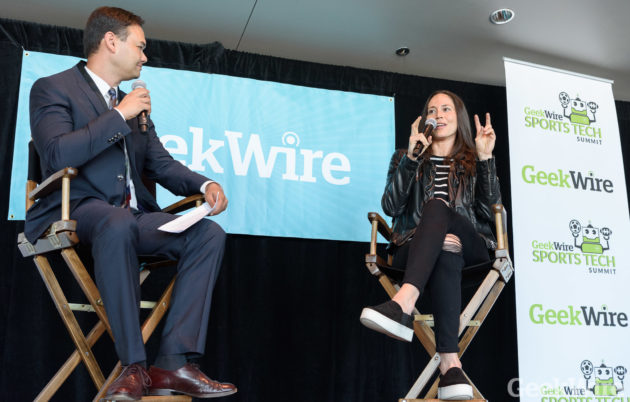 Bird also said that sleep is big emphasis for the Storm, and she gives credit to Susan King Borchadt, the team’s sports performance consultant, for axing morning shoot-arounds on game days in favor of letting the players get extra rest.

Little things like that can make a difference in an era where most elite athletes have access to top notch training and facilities from early ages, all the way up to the pros.

“Nowadays, the difference between athletes is really small, and if you can get an edge, why not take it,” Bird said.

Watch the full interview above, or at this link.