The Great Recession struck a major and lasting blow to entrepreneurship but the nation’s startup ecosystem appears to finally be recovering.

That’s according to a new study from the Progressive Policy Institute (PPI), a moderate think tank and policy advocate, and TechNet, an advocacy group comprised of tech CEOs.

The study (aimed at persuading local and federal governments to enact policy that promotes innovation) analyzed government data and job listings to determine the health of startups in the U.S. and the impact they have on job growth and the overall economy.

Bureau of Labor statistics from 2015 to 2016 reveal that new establishments — that is new startups or businesses that expand to new locations — are finally increasing after years in a recession valley.

“The creation of new establishments finally accelerated in 2015 and 2016 — not just in the leading tech hubs, but in smaller states and communities as well,” writes PPI chief economist Michael Mandell. “Overall, the number of private-sector establishments increased by 2.5 percent in the first three-quarters of 2016, the fastest rate of growth since before the Great Recession, and just below the 2.7 percent average rate of the 1990s.”

Researchers also studied the content of job listings on Indeed.com, to find out how frequently the word “startup” appeared. They claim the presence of the word — even in listings from big companies that claim to operate like startups — indicates a culture that values entrepreneurship. The presence of the word “startup” increased by 60 percent between 2014 to 2016, according to the study.

PPI and TechNet are encouraged by these numbers because they see an increase in startup creation as a big driver of jobs.

But Mandell says it’s equally important to look at the regions lower on the top 25 list as up-and-coming centers of innovation and entrepreneurship. 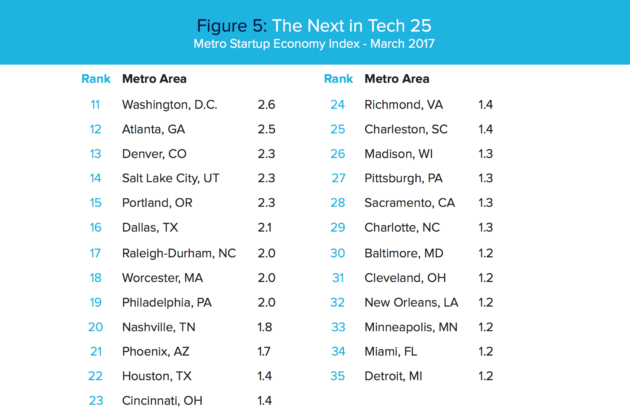 A 2016 Kauffman Index Report backs up the PPI’s findings that startup ecosystems are bouncing back. The study also supports the theory that startup growth is spreading across the country, beyond traditional tech hubs. Washington D.C., Columbus, Ohio, Nashville, Tenn., and San Antonio, Texas, were all on the Kauffman Index’s top 10 list of metros with the highest growth in entrepreneurship activity. The Kauffman study calls this phenomenon “The Rise of the Rest.”

“From Chicago to New Orleans, Nashville to Los Angeles, vibrant new companies are being formed that have the potential to become significant job creators — particularly if nourished and supported by the right public policies,” Mandell writes.

Nudging the government toward those public policies is the impetus for the study. The PPI is imploring the federal government to reconsider rules governing crowdfunding and investing, to double down on STEM education and R&D, and to reform immigration policy to promote entrepreneurship.

“The recent acceleration of establishment growth suggests that [economic] dynamism may be slowly starting to revive — but it is not enough,” Mandell says.