SoftBank sparked headlines in the technology world this week as the tech giant prepares to invest $1 billion into online sports apparel company Fanatics, according to The Wall Street Journal. It’s a peculiar investment for SoftBank and its Vision Fund, which typically focuses on more traditional tech companies like Boston Dynamics, Nvidia, or OneWeb.

But it highlights how Fanatics, now valued at $4.5 billion, has caught the attention of big-name investors with its formidable e-commerce engine that pairs high-speed manufacturing with crucial sports league licensing deals — a formula that one Seattle startup is also using on its own pathway to success.

But now the company, started by University of Washington fraternity brothers and lifelong friends Riley Goodman and Jake Director, is taking it up another notch.

Strideline just inked a licensing deal with the NFL Players Association, allowing the startup to create socks with NFL player names and photos.

It’s the result of nearly two years of meetings between the NFLPA and Strideline, which will roll out a new line next week featuring star Seahawks players who will receive royalties on sales of socks with their likeness. 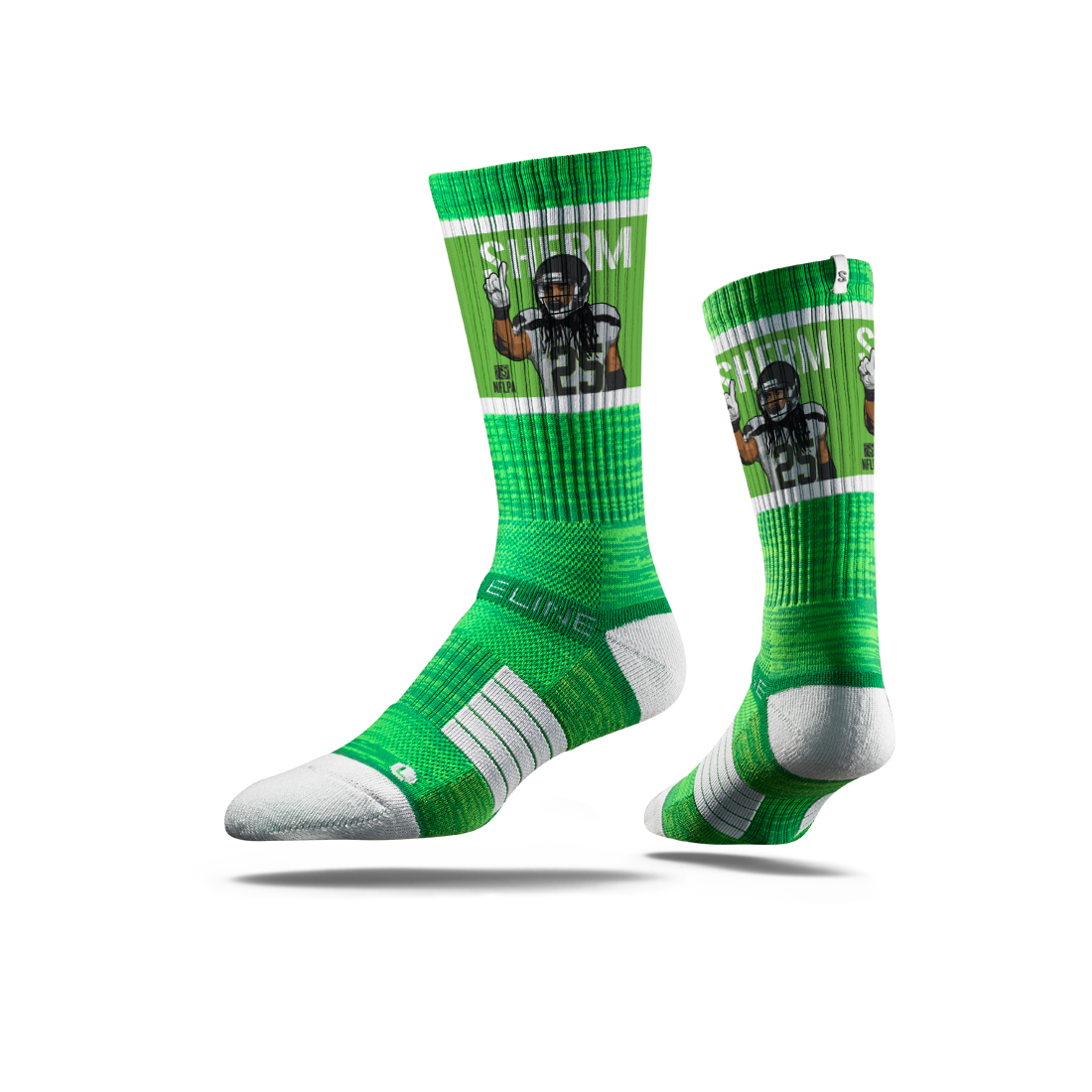 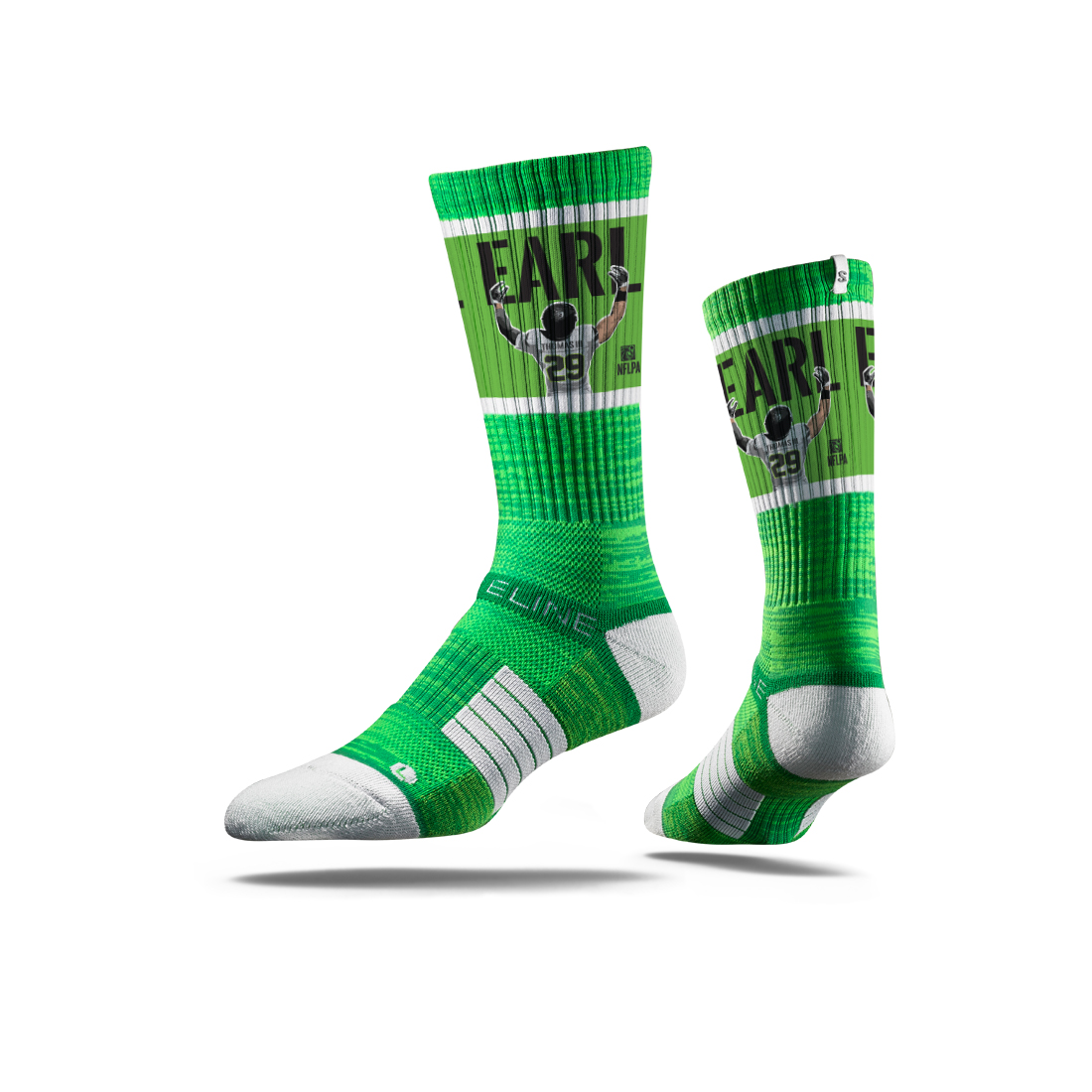 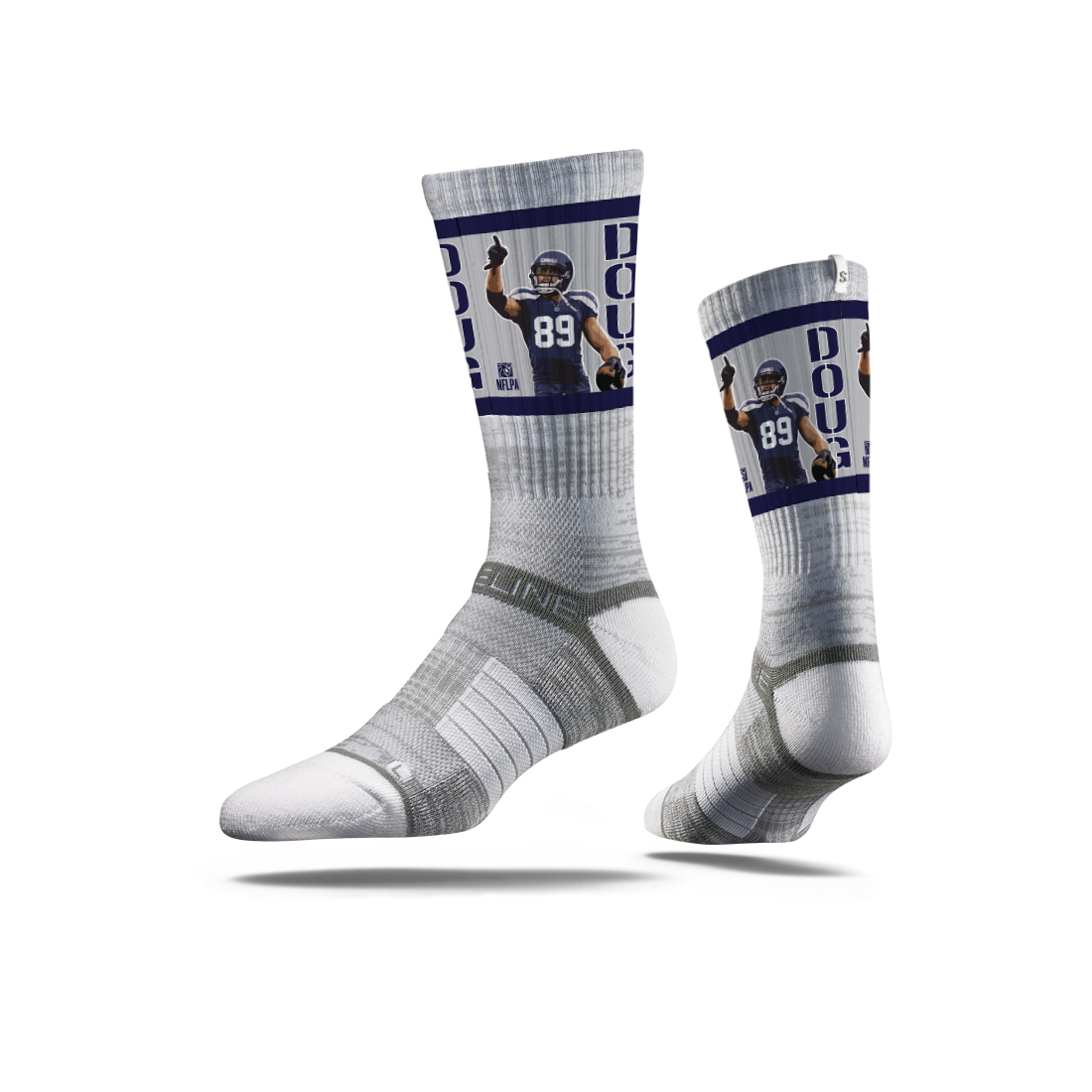 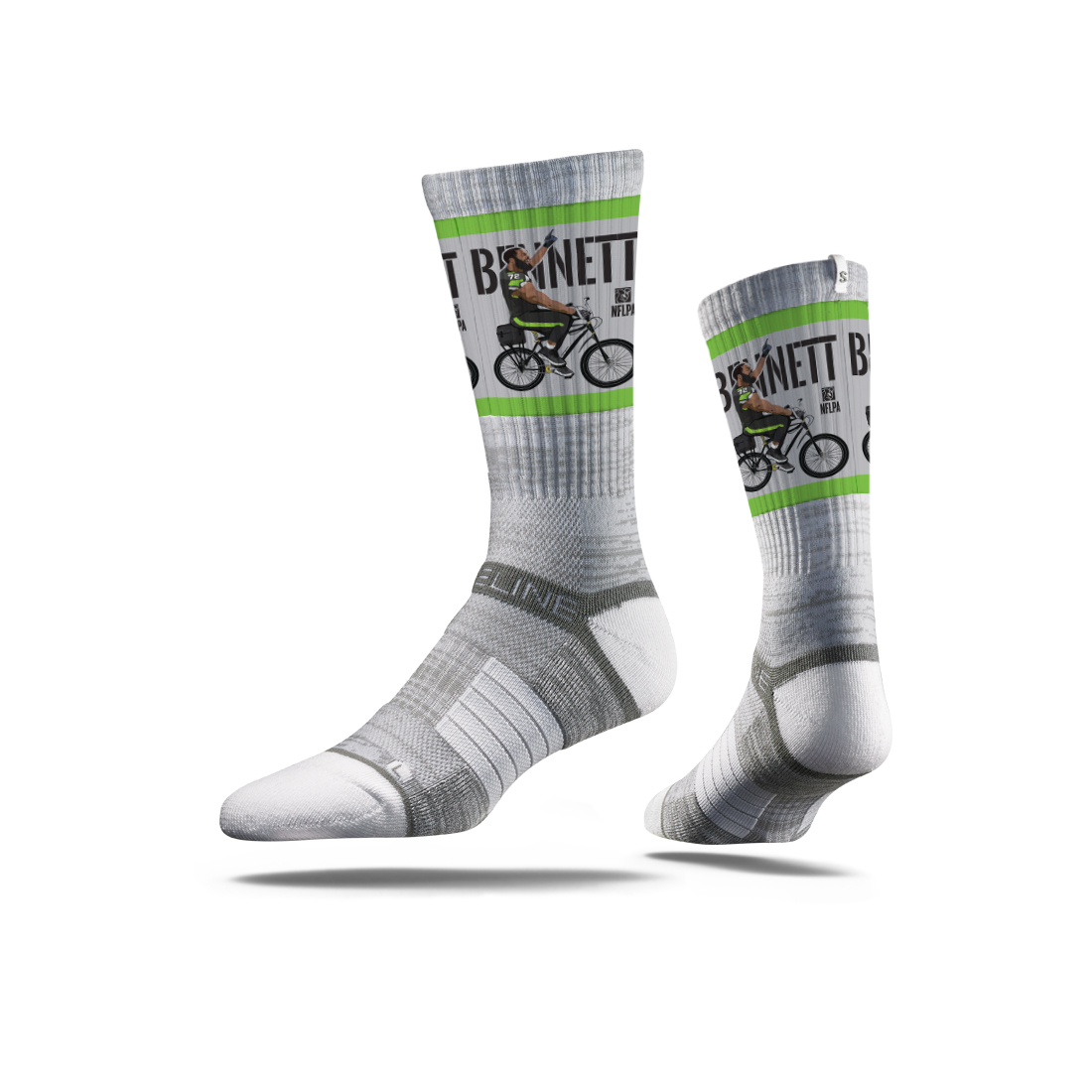 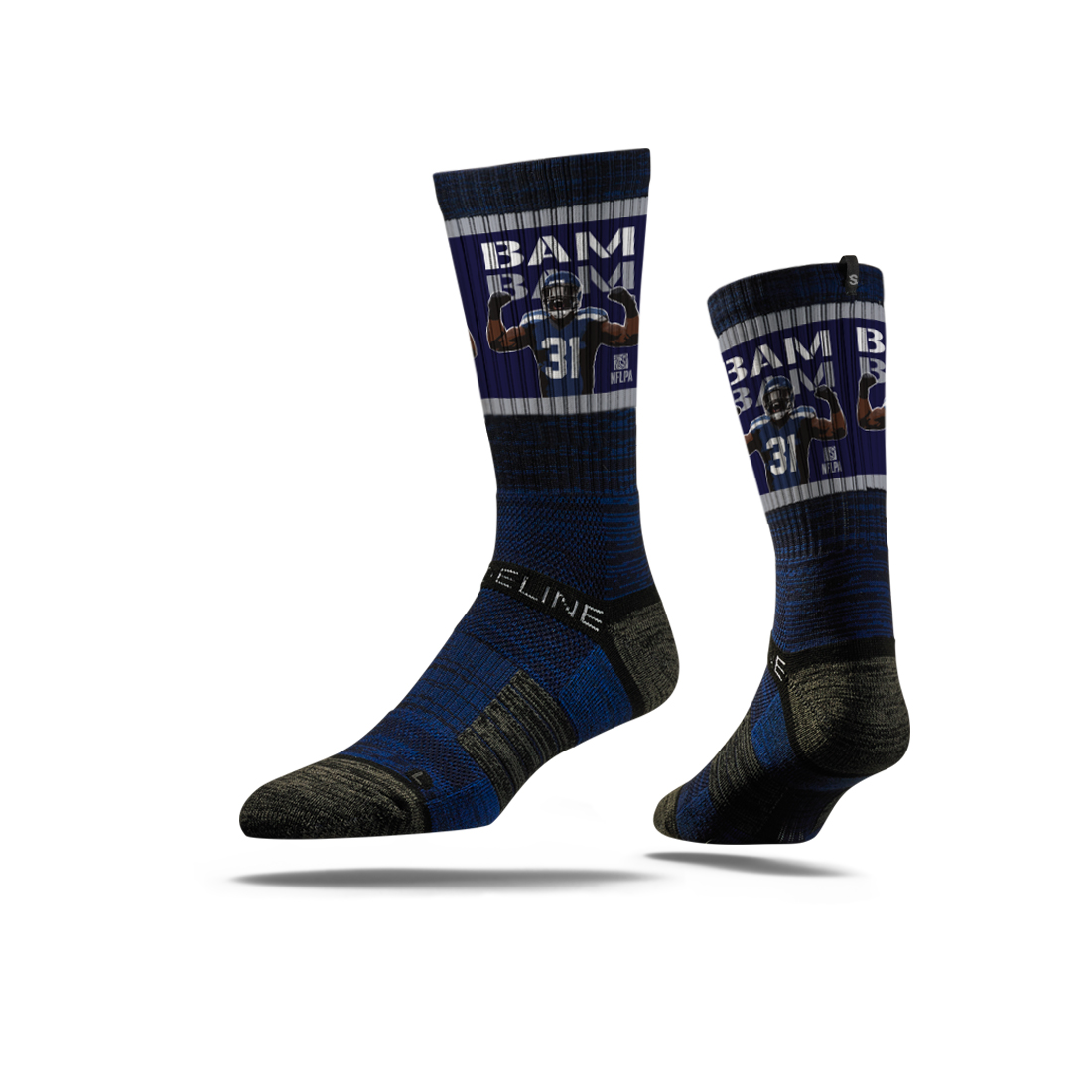 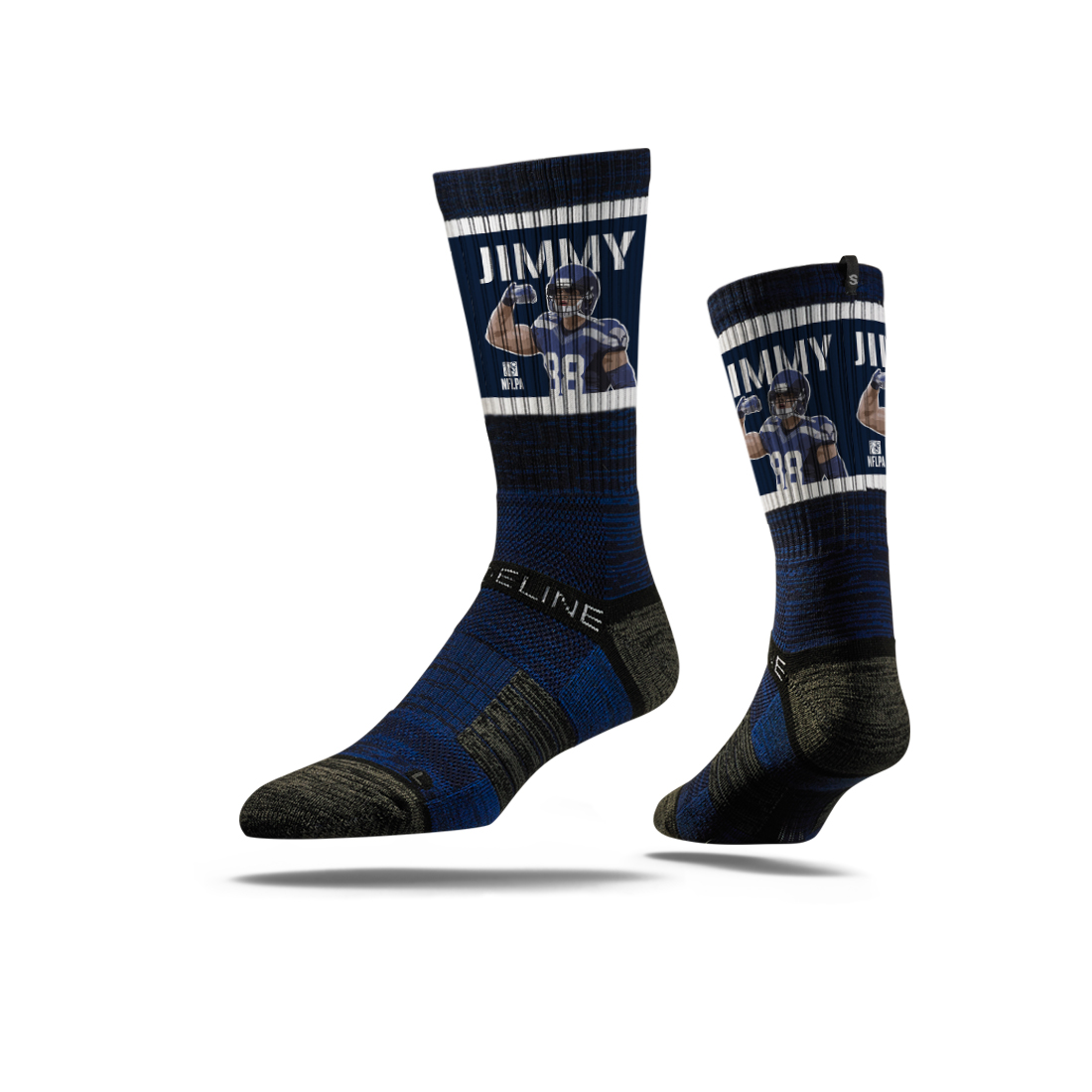 Goodman told GeekWire that the company had to give a presentation to Fanatics executives to acquire NFL player licensing rights. That’s because the NFLPA now handles licensing agreements through Fanatics, which is a league partner. The NFL is also an investor in Fanatics.

“The reason we got this license is because of our speed-to-market model,” Goodman said. “It goes along with all the initiatives Fanatics is trying to do as it evolves in a rapidly-changing market and competes with Amazon.”

Fanatics has been around for more than two decades, but recently it implemented new manufacturing processes that allow the company to quickly produce and ship products on-demand from its own factories. It’s a production method, which some refer to as “just-in-time,” that fits the demand of today’s consumer and utilizes new technology.

Strideline, which sold more than two million pairs of socks in the last year, follows a similar supply chain strategy. The company learned over the years that it was difficult to forecast what products would sell, particularly in the sports industry, and inventory levels were hard to manage with maximum efficiency.

“We started piloting programs built all around speed,” said Director, who was born six hours apart from Goodman in the same hospital. 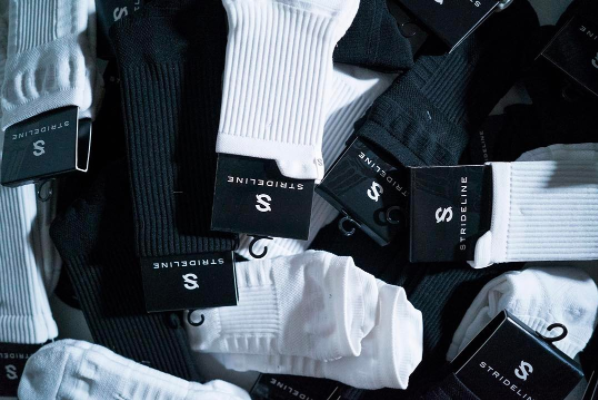 Now Strideline owns its own factory overseas and creates socks when orders come in — it has little-to-no inventory — and can ship the product to a customer’s door within 3-to-5 days. It applies the same methodology for larger orders, and can deliver a batch of 30,000 pairs in just over a week.

“We really believe the future of retail and especially the future of apparel will be built on super high speed and high-quality products,” Director said. “That’s the system we are looking to build.”

Ultimately our plan is to be the fastest No. 1 athletic apparel company on Earth.

Director said that if a retailer like Nordstrom wants to buy 50,000 pairs of socks from a company like Nike, it could take nine months for the order to ultimately arrive.

“The retailers that survive are the ones who can rapidly adapt to consumer demands,” he explained. “While they work hard to do it, the bigger companies aren’t capable of what we can do. The quality of our product and relationship with the customer will allow us to win in the long term.”

Speed is certainly a common trait among some of today’s most successful startups, whether it be in online apparel or cloud technology. Speaking in Seattle earlier this year, LinkedIn co-founder Reid Hoffman said that “there is no modern Silicon Valley company that doesn’t actually, in fact, have kind of these speed genetics built in.”

Speed is now embedded in the DNA of Strideline.

“Ultimately our plan is to be the fastest No. 1 athletic apparel company on Earth,” Goodman said.

Strideline is similar to Fanatics given its new NFL licensing deal, which expands the startup’s potential customer base exponentially, on top of its existing NCAA licensing rights. The company already has NFL stars like Antonio Brown sporting the new socks.

Fanatics expects to generate $2.2 billion in revenue this year, The Wall Street Journal reported, with about 75 percent of that coming from direct-to-consumer sales online.

Strideline, which has doubled annual sales for the past five years, said it only has 5 percent of revenue from direct-to-consumer purchases through its website. It expects that number to grow with the NFL licensing deal, and particularly as the company improves manufacturing capabilities and speeds up shipping time. Strideline is also seeing growth with custom sock orders from corporate customers and will continue sending product to its big-box retail partners like Nordstrom, Costco, Lids, Rally House, Big 5, and others.

Strideline, which is bootstrapped, employs 30 people at its Eastlake headquarters in Seattle but expects to grow to as many as 50 employees by mid-2018. It also plans to expand beyond socks.